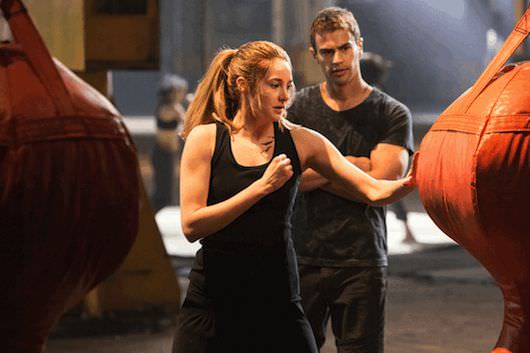 For most young adults, one of their most pressing questions is “What do I want to be when I grow up?” In the futuristic society in Divergent, the answer to that question is predetermined. At sixteen, they are sorted into one of five factions where they spend the rest of their lives. Shailene Woodley (The Descendants, Secret Life of an American Teenager) and Theo James (Underworld: Awakening) star in this adaptation of the bestselling young-adult novel by Veronica Roth. Like The Hunger Games, Divergent features young adults thrust into violent situations. That’s where the expertise of fight coordinator J.J. Perry came in.

Perry estimates he’s worked on 160 features and 400 episodes of television since he first started in the industry. He’s worked as a stunt performer, fight coordinator, and second unit director. “I’ve been hit in the face in twenty seven countries in the world,” Perry says. His expertise ranges from the similarly kid-focused Ender’s Game to R-rated action like Django Unchained, Argo, and Warrior. For Divergent, he was challenged with coordinating fights featuring Woodley and James, who are part of the paramilitary faction Dauntless. The experience drew on his army background, where he served from 1986-1990, and the decades he’s spent since doing his “dream job.”

You started out doing stunts and now coordinate them. What kind of advantages to you get from having been in their shoes?

It helps me direct the stunt performers. A lot of times, watching the monitors [during shooting], I know by looking in their faces what’s wrong or if there’s something bothering them.

How would you sum up how you approach a project?

Doing the previs [previsualization] for me is the most important, and doing it as early as possible in the pre-production process. We took the stunt doubles, before the actors ever came in, and did rehearsal and previs. We shot and cut all the fights on digital ourselves beforehand for the director’s approval. That way, everyone goes, ‘This is what we’re doing,’ and signs off on it, and there’s no straying from that.

How elaborate is the previs? What goes into it?

It’s pretty elaborate. We don’t usually get the sets, because it’s too early, but we put in sound and visual effects to it. They’re temporary effects, the kind you can do on After Effects [visual effects software], but we do go for it. We want to show what the fight is going to look like when the people who can really fight make it work. So if the doubles can look like that, then, we have a lot of work to do with the actors. It’s a motivating tool for them. When the actors show up, we can give them a copy of that footage on their computer so they can study it every night at home before they come to rehearse the next day.

What were the cast and crew like, especially during the pre-production training?

I trained all the actors for four hours a day for four weeks, so I got to know them all really well. They all had a tremendous work ethic. Most of them didn’t come from an athletic background, so it’s a hard thing to embrace, especially when we have four weeks to cram a lot in, so I rode them pretty hard. I wasn’t nice to them all the time. But they embraced the process, and I think that’s why the action in the movie shined. Neil [Burger], he’s a great director, he’s got a great vision and a great work ethic, and he’s a leader.

Besides helping the actors, what else is helpful about the previs?

There are tons of advantages. First of all, it’s like doing a video storyboard, but everyone can see the finished product with the action before they even shoot it. The makeup department can see, ‘Okay, this guy gets his on the right side of his face, we need to put a bruise there.’ It helps the wardrobe department: ‘This guy gets grabbed and thrown by his shirt, his shirt needs to be torn.’ It helps the camera department, because it gives them a better idea of what the choreography is going to look like and the angles they need. It also gives the director a final product to look at, and say, ‘I love this,’ or ‘Change this.’ For me, it’s the bottom line.

What is your role on set?

I’m there to coach them through every second of the fight. When the first fight comes up, I show up, line up the first shots, get it rolling, and then put it in the can bit by bit. I stand at the monitors making sure all the hits are lining up and it all looks good.

Did you go for any kind of unique look with the fighting?

[Stunt coordinator] Garrett [Warren] and I took it upon ourselves to do something a bit different. The way that they stood, it’s what old boxers from the ‘30s and ‘40s called peekaboo stance, where you put one elbow in front, and wrap the other hand across your stomach, and put a hand up by your chin and tuck your chin below your forward shoulder. It’s the way George Foreman used to stand. We lean them forward a bit more. We experimented with a bunch of things, and that stance and fighting position looked the most interesting. It was supposed to look like something was different. People usually say this to me when I’m doing a film. They go, ‘I want to see something that’s never been seen before.’ The problem is everything’s been seen before!

From what you’ve seen in the movie, what do you think will be a clinch point for audiences?

I have a daughter who is twenty months old. The story is about a young girl who is a little bit lost in her life. She doesn’t know her place in society or fit in. Her struggle to find herself is going to carry this movie. That’s what I think a lot of young girls can relate to. The action is just going to complement that story.