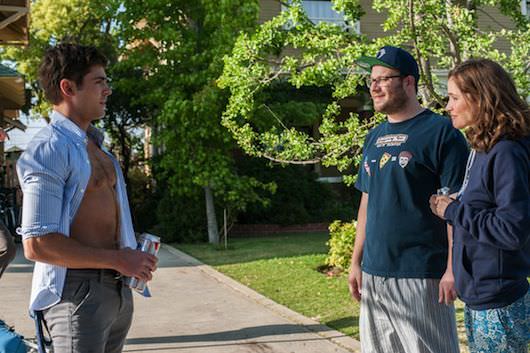 While it’s an inexact science figuring out how much a festival crowd’s enthusiasm means for the future of a film, the screening of Universal’s Neighbors at SXSW must have delighted many in the studio. Hundreds of people waited patiently, in the rain, for roughly an hour to see director Nicholas Stoller’s movie and roared with laughter for just about all of its running time. Universal is offering a look at their summer slate today at CinemaCon, and will host a special screening of Neighbors tonight at 8pm.

Seth Rogen and Rose Byrne star as a Kelly and Mac Radner, a young married couple with an infant trying to deal with their new neighbors—a fraternity led by its charismatic, handsome, lunatic president, Teddy Sanders, played with admirable, exuberant idiocy by Zac Efron. What also must bode well for the studio is that two Australian women seated next to us during the screening groaned, audibly and with no small amount of pleasure, every time Effron was shirtless (which is often). Our guess is audiences will rush (fraternity pun!) to theaters when the film opens on May 9.

Seth MacFarlane, fresh from his success directing, co-writing and co-starring in Universal's Ted is back with A Million Ways to Die in the West. MacFarlane once again directs, produces, co-writes and stars in this film about a cowardly sheep farmer named Albert (MacFarlane) who loses his girlfriend when he backs out of a gunfight. A mysterious beauty arrives in town (Charlize Theron) who helps Albert become a man (he falls for her, of course). But unfortunately for Albert, his new love interest is followed by her terrifying husband (Liam Neeson), putting his new found manhood to the test. MacFarlane's got a huge fan base, both from Family Guy and Ted—so it's not a stretch to think he'll land another hit matching his absurdist humor with a much beloved (and fun to mock) genre.

Talk about guts—Chadwick Boseman seems to gravitate towards larger than life historical figures, having already winningly played Jackie Robinson in last April's 42, and now here is in Get on Up playing James Brown. Boseman's portrayal of the father of the funk will be released on August 1, and if the chills produced just watching the trailer are any indication, it'll be a film worth seeing.

Universal will also be teasing The Purge: Anarchy; Lucy; and The Loft.