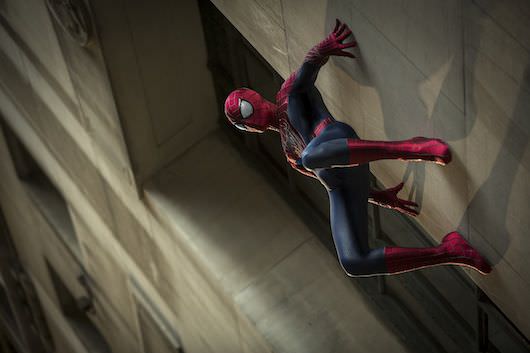 What better way to enjoy Sony Pictures’ presentation than after a few cocktails? The studio is hosting a pre-event cocktail reception in The Colosseum Lobby at Caesar’s before they unveil their 2014 films. Classy. President, Rory Bruer is the man on hand to give folks a glimpse of everybody’s favorite web-slinger, as well as everybody’s favorite undercover cops, to name a few of the films that’ll be teased during their presentation.

Peter Parker (Andrew Garfield) faces a host of super villains in The Amazing Spider-Man 2, with Electro (Jamie Foxx) and Rhino (Paul Giamatti) looking particularly formidable. Giamatti in particular is a delicious casting choice—to think that nebbishy, beleaguered Miles from Sideways is this guy is pretty fantastic. The rest of the cast is predictably topnotch, with the aforementioned heavyweights sharing the screen with Emma Stone (Parker’s amour, Gwen Stacy), Sally Field (Aunt May), and Dane DeHann (Harry Osborn). The filming was done primarily in New York, bringing some 3,500 jobs to the state (the production required roughly 6,000 hotel room nights, 11,000 extras, and hundreds of thousands of dollars in rentals and equipment). What fans care most about, of course, is will it blow their minds—the trailer seems to answer in the affirmative. The Amazing Spider-Man 2 continues this new, highly engaging reboot of the franchise, with spinoffs and the continued forming of the Sinister Six to look forward to. Spidey will face his ultimate test (until the next film) on May 2.

Officers Schdmit (Jonah Hill) and Jenko (Channing Tatum) are back in 22 Jump Street, and it looks like they’ve graduated. After surviving high school (a second time), they’re off to college for another round of hijinks, hilarity and wholesale destruction. Nick Offerman, Ice Cube, Peter Stromare and Dave Franco round out Phil Lord and Christopher Miller’s film, which will be released on June 13.

Think Like A Man Too reunites the cast from the first film (based on the book by Steve Harvey) for a “who can crush Las Vegas better” duel between the men and the women. Funny men Romany Malco and Kevin Hart are two of the outmatched men trying to out-fun the likes of Gabrielle Union, Taraji P. Henson and more. The craziness ensues on June 20.