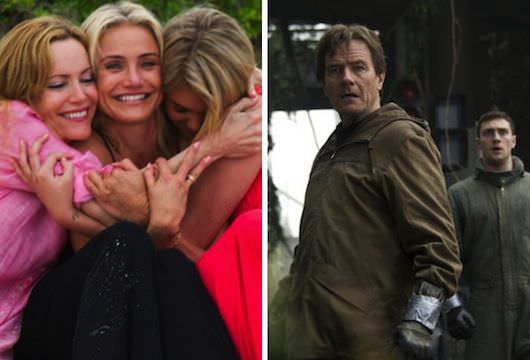 Funny, smart and tough women abound in 20th Century Fox’s upcoming slate of films. Three of them will be making appearances today in CinemaCon to tout their films—Cameron Diaz and Leslie Mann for their revenge comedy The Other Woman and current Divergent star Shailene Woodley for the adaptation of the beloved YA book The Fault in Our Stars.

Cameron Diaz and Leslia Mann have proven their comedic acting chops time and time again, so it’s really the new girl’s turn to prove she can make ‘em laugh, and that new girl is…Sports Illustrated swimsuit model Kate Upton. When Diaz finds out her new boyfriend, played by Game of Thrones Nikolaj Coster-Waldau, has a wife (Leslie Mann), the two of them embark on a revenge mission to make him rue the day he betrayed them. These unlikely comrades find out that he’s got a third woman (Upton), who they include in their scheme, only to find out he’s got a fourth woman. The cast also includes Nicki Minaj and Don Johnson (please let those two make their own movie) in what looks to be a very fun way to kick off their summer season. The film opens on April 25.

John Green’s gorgeously written novel has been adapted for the screen in another likely winning turn for Shailene Woodley, who plays Hazel, a sixteen-year-old cancer patient who falls for a young man, Gus (Ansel Elgort), who she meets in a cancer support group. The book was ten years in the making, a labor of love that produced a work that honors the ability of young people to embrace emotionally complex characters dealing with serious issues. The film, directed by Josh Boone, from a script by Scott Neustadter and Michael H. Weber, includes big time talent in the form of Laura Dern and Willem Dafoe.

Fox teased Dawn of the Planet of the Apes and Let's Be Cops as well.

Warner Bros. has some monster movies in their pipeline, none more so than Godzilla. Gareth Edwards film, based on a screenplay by Max Borenstein, has already generated a ton of excitement (the above trailer has been played over 19 million times) thanks in large part to what appears to be an interesting take on the Godzilla story, and, a slew of top notch actors, including Bryan Cranston, Sally Hawkins, Juliette Binoche and Ken Watanabe. It doesn’t hurt that film will be a technical marvel—the sound alone, mixed in Dolby Atmos, will be worth the price of admission.

The studio has a lot of films to tease, from Jersey Boys to Jupiter Ascending and If I Stay. On the sci-fi front, they’ll be releasing Edge of Tomorrow, a Tom Cruise-led mindbender directed by Doug Liman, in which Cruise is a soldier killed while fighting in a brutal war with aliens, only to find himself snatched in a time loop that has him relive that last day of battle, learning as he goes. Costarring Emily Blunt, the film is based off Hiroshi Sakurazaka’s novel “All You Need is Kill,” and was shot on 35mm as well as D-Cinema for the 3D version.