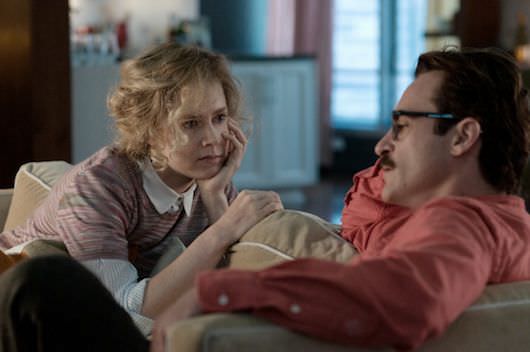 Valentine’s Day is a marketing ploy developed by cynical advertisers whose only aim is to separate suckers from their money. Valentine’s Day is an opportunity to show the person you love how much they mean to you, regardless of its origin. Valentine’s Day is a 2010 Gary Marshall film starring two Jessica’s (Alba, Biel), Bradley Cooper, Anne Hathaway, and about four thousand other famous actors that you were either dragged to see or dragged somebody else to see.

How a couple views Valentine’s Day, as a holiday or as a film, is a potential argument starter, and could be one of those arguments a couple will never resolve and, perhaps, portend deeper communication issues whose results could be disastrous. Yet a new study getting a lot of attention from the University of Rochester suggests that arguments between couples such as “Valentine’s Day is a total sham devised by Hallmark executives and Big Flower/Valentine's Day is a chance to say I love you,” and “how could you possibly like/dislike Gary Marshall’s Valentine’s Day?” could be ameliorated by watching a film like Valentine’s Day.

Reported in The New York Times (among other news outlets), the University of Rochester study found that couples who watched films about romantic relationships together, and discussed the issues raised in those films after, were less likely to separate or divorce than couples in the control group who didn’t watch the films. These preliminary findings also suggest that this ‘movie intervention’ method was as effective at keeping couples together as two therapist-led interventions called CARE and PREP.

For couples who don’t have access to therapists, or who are reluctant to use them, this study could prove that a viable, affordable option is available in the romantic trials and tribulations of rom-com era Matthew McConaughey. When associate professor of psychology, Ronald D. Rogge, set up this study, he and his team were initially trying to evaluate the relative effectiveness of CARE and PREP. The former focuses on empathy and acceptance in couples counseling, while the latter helps couples learn a specific communication style that they can use to resolve issues. Rogge and his fellow researchers struck upon the idea of a third group having a movie intervention, in which couples would watch five movies and take part in a guided discussion afterward. A control group was established as the fourth group, comprised of couples that would not undergo CARE, PREP or the movie intervention.

The results indicate that along with professional therapists with years of education and training, The Break-up's Vince Vaughn and Jennifer Aniston have a lot to teach us as well. Of the 174 couples studied, the couples who received counseling or took part in the movie intervention were half as likely to separate or divorce after three years compared to the couples in the control group. The fact that the movie intervention was equally as effective as CARE and PREP suggests that Beyoncé and Idris Elba, from 2009’s Obsessed, can be useful beyond being fun to look at.

So what movies did the researchers use and what questions might those films raise? They didn't use When Harry Met Sally or Sleepless in Seattle, which might surprise you and Meg Ryan. Those films and films like them are about falling in love—totally unrealistically, according to Dr. Rogge and most breathing humans (not to say they aren't wonderful to watch, however). “Hollywood can place very unrealistic expectations on romantic relationships,” he told the Times. Well, yes, but with all do respect, Fool’s Gold, starring McConaughey and Kate Hudson, isn’t exactly Kramer vs. Kramer, yet the former’s on the list and the latter’s not. Does this mean that Rogge and his team thought that a film about an impossibly attractive divorced couple finding their mojo again on an epic, exotic treasure hunt has more challenging questions for a couple to discuss than a realistic look at the toll divorce takes on everyone involved?

In fact, the list of films chosen is somewhat baffling. It does include extremely challenging, depressing, downright moonless-prairie-night-dark tales like Blue Valentine, starring Ryan Gosling, Michelle Williams and every fear you’ve ever had about falling out of love, as well as Marley and Me, about a incorrigible yellow labrador and the married couple that learns to love him, and themselves.

There are plenty of films about adultery on the list, including one that is also about insanity and an unsanitary and immoral way to cook rabbit. Yup, you guessed it, Fatal Attraction is on the list, which raises all sorts of questions, not least of which is how is it possible people once liked perms? Unfaithful is also on this list, starring Diane Lane and Richard Gere—a film that almost seems to suggest that, save homicidally angry cuckolds, adultery can be pretty hot, especially if carried out on a train or an impossibly gigantic loft in New York City, owned by an artist. A separate study should be done about all the films and TV shows that pretend artists in New York (without trust funds) can live in sprawling apartments, and what that says about our value system, or the lunacy of real estate prices. Or something.

The list includes films that raise questions about the impact of careers on relationships. Take The Devil’s Advocate, which we guess helps spark a dialogue about what happens if your spouse is employed by the devil—do you shrug it off because the money’s so good, or do you go completely insane, like Charlize Theron does? Speaking of the devil, there's The Devil Wears Prada, which asks couples to question what happens when ambitions inside a relationship become increasingly mismatched and whether or not they prefer Mean Streep over Nice Streep, and what it says about you when you love Mean Streep more.

Then there’s Spike Jonze recent Her, nominated for a Best Picture Oscar, about a man’s relationship with his operating system—essentially the iPhone's Siri if Siri were remotely entertaining, intelligent and had Scarlett Johansson’s voice. This film raises potentially interesting questions for couples about reliance on technology, about being present in the moment rather than obsessively checking and re-checking your phone, and when, if ever, high-waisted pants are suitable for men.

Of Richard Linklater’s Before trilogy, which is one of the greatest cinematic representations of the lifecycle of a relationship ever, only the second film, Before Sunset, make the study's cut. The first film, Before Sunrise, is a falling-in-love film, but why leave out Before Midnight, a brutal, beautiful, honest look at what nine years of marriage will do to even the most passionate of relationships, even one including a French woman?

The list goes on and on—there's the The Notebook (raising questions about how far people, regardless of their sexuality, would go to get into a rowboat with Ryan Gosling), Husbands and Wives (starring Woody Allen and Mia Farrow—enough said), and Who's Afraid of Virginia Woolf (raising questions about gin, what gin does to people, why gin does that, and what, exactly, is in gin that makes it do that?).

Of course we’re being tongue-in-cheek here. Anyone could pick apart the merits of a film put on this list versus those left off. We reached out to Dr. Rogge for comment, and although he hasn’t gotten back to us yet, we hope to speak to him in the future and get his thinking on the films selected, and commend him and his team for coming up with this study in the first place. One of the most satisfying, and enriching, things about watching a film is watching it with someone you care about and debating it afterwards. It's almost more astonishing someone hasn’t thought of this study a long time ago, and we applaud Dr. Rogge and his colleagues for bringing film's inherent ability to open and sustain important conversations into the academic and scientific realm.

Now Dr. Rogge and his team are reaching out to couples all across the country to study how a movie intervention might effect all types of relationships, from same-sex couples to long married people. If you’re in a couple and think you could benefit from the movie intervention, click here to learn more about the study.

And now, in an act of full disclosure, the film Valentine’s Day, which began our little rant, isn’t actually on the original movie list from the study, but, in our defense, couples who want to participate in the ongoing study now are allowed to choose their own movies. If you’ve got courage, you’ll choose Kramer vs. Kramer instead.