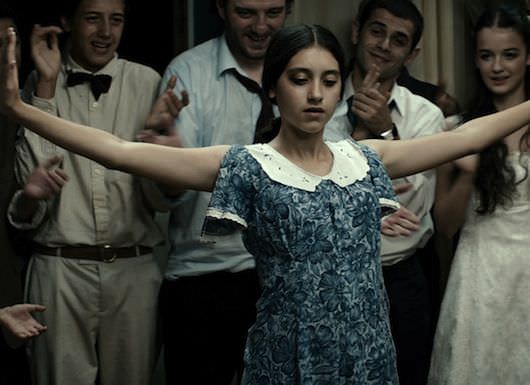 Sochi may be hosting the Olympic Games—the resort city is also home to the Sochi Open Russian Film Festival, held annually in June since 1991—but it’s Russia’s regressive, shameful politics that have dominated the world stage while all eyes are on the host country. What better time to pay tribute to Russian filmmakers, past and present, who are responsible for some of the world’s best films — their achievements all the more remarkable because they’ve often worked under oppressive conditions.  From landmarks such as the film-school staple Battleship Potemkin to more recent masterpieces like Russian Ark, it’s hard to imagine international cinema without Russian representation. Here are just a few examples of classic and newer films that showcase Russian filmmakers and artists who, despite many obstacles, created and continue to create such a rich cinema legacy.

Although Russian cinema has been around since the Lumière brothers exhibited films in Moscow and St. Petersburg, its global influence influence began, arguably, with Sergei Eisenstein‘s 1925 silent Soviet classic Battleship Potemkin, a propaganda film ordered by Russian revolutionary leaders for the 20th anniversary of the Potemkin uprising of 1905, when the crew of the Russian battleship Potemkin rebelled against their officers of the tsarist regime. The film is heralded for its groundbreaking cinematic techniques such as jump-cuts and fast-paced montage. But it is most famous for one landmark sequence—one of the best-known ever put on film—when  the tsar’s troops march down the Odessa steps and fire at a crowd of terrified citizens, including a woman who tries to protect her baby in a carriage but the carriage bounces precariously down the steps. Many films have paid homage to this extraordinary sequence, most notably Francis Ford Coppola in The Godfather and Brian DePalma in  The Untouchables.

Japanese auteur Akira Kurosawa directed this Soviet-Japanese co-production and earned the Oscar for Best Foreign Language Film. It’s based on the memoir by Russian army explorer Captain Arseniev (Yuri Solomin), who led a military expedition in 1902 to map the Ussuri region of Siberia, near the border of China. But the heart of the film is the friendship that evolves between Arseniev and nomadic Siberian native Dersu Uzala (Maksim Munzuk) who aids the soldiers in survival skills as they face the obstacles of the Siberian wilderness. Shot on location in Siberia on expensive and cumbersome 65mm film (it was conceived from the start as a 70mm release), the film earned both the Oscar and the Grand Prix at the Moscow Film Festival.

One of the masters of Russian cinema,  Alexander Sokurov has made dozens of highly acclaimed films but one must-see is Russian Ark, filmed in a single 96-minute shot in the Russian Hermitage Museum. The dream-like narration time-travels through Russian history as it celebrates its culture. There are appearances by Peter the Great, Catherine the Great, and Tsar Nicholas I, as the camera glides through some 33 rooms of the museum, including the Winter Palace, residence of Russian tsars from 1754 to 1762. Sokurov developed and prepared this film for years, and shot it in one day with four precious hours of light. The film ends with a grand ball featuring hundreds of actors in period dress, music by famed Russian composer Mikhail Glinka, and a full orchestra conducted by Valery Gergiev, the renowned artistic director of the Mariinsky Theatre.

Through her juxtaposition of archival footage, home movies, and engaging interviews with five 30-something Muscovites born under Communism but who came of age around the collapse of the Soviet Union, director Robin Hessman’s engaging documentary offers a surprising and revealing look at Russia’s past and present. A married couple who are teachers, Borya and Lyuba, talk about their journey from idealistic youth to a more resigned middle-age in the cramped but homey apartment they share with their young son, Mark. Against shots of Pizza Huts and Mark plugged into his iPod, his father’s nostalgia for his youth during the Cold War is as poignant as it is humorous. A graduate of Brown University, Hessman completed a five-year directing program in Moscow and was a producer for the Russian “Sesame Street.’’ Her familiarity with her subjects and the obvious time she spent with them pays off in remarkably intimate interviews and finely observed details of her subjects’ day-to-day lives.

Of course, Russian cinema is more than historical epics or ponderous personal visions. A pair of vampire/horror/fantasy films, Night Watch (2004) and its sequel Day Watch (2006), based on the novels of Sergei Lukyanenko, were international blockbusters. Night Watch was the highest-grossing film ever in Russia — until that record was broken two years later by Day Watch. The films were directed by Timur Bekmambetov, whose success with these films took him to Hollywood,  first to helm Wanted, starring Angelina Jolie and James McAvoy, then to direct another oddball vampire movie, Abraham Lincoln: Vampire Hunter in 2012. Set in modern-day Moscow, the plots of Night Watch and Day Watch are convoluted but basically center on the forces of light and darkness — good guys battling evildoers called “others.” The films were so successful that Fox Searchlight picked them up for international distribution. Many critics took note of the innovative use of stylized subtitles, that popped up in odd places around the screen in ways that conveyed characters’ thoughts or complemented the action.

Nikita Mikhalkov, the director and star of the 1994 Oscar winner Burnt by the Sun, is a controversial figure in Russia for his strong support of Russian president Vladimir Putin. Allegedly Mikhalkov produced a television program for Putin’s 55th birthday in 2007, and co-signed an open letter asking Putin not to step down after the expiration of his term in office. Despite much opposition from rival directors, Mikhalkov was elected the President of the Russian Society of Cinematographists and has managed the Moscow Film Festival since 2000. But politics aside, Mikhalkov’s films stand on their own merit. There is little dispute that his most famous production to date, Burnt by the Sun, one of the highest grossing films to come out of the former Soviet Union, is a masterpiece. Besides directing it, Mikhalkov has a leading role in the film, an epic romance set during Josef Stalin’s Great Terror of the 1930s. It was while still an acting student that Mikhalkov appeared in Georgi Daneliya‘s I Step Through Moscow (1964), a love letter to the Russian capital. As a director Mikhalkov established an international reputation with just his second feature, A Slave of Love (1976). He hails from a prominent family of artists — his older brother is the filmmaker Andrei Konchalovsky, primarily known for his collaboration with famed Russian filmmaker Andrei Tarkovsky and his own Hollywood action films, such as Runaway Train and Tango & Cash.

The movies can’t get enough of Leo Tolstoy’s 19th century classic that tackles the hypocrisy of Russia’s social order through its tragic story of married aristocrat Anna Karenina, who is trapped in a loveless marriage and her passionate, doomed affair with Count Vronsky. It’s been filmed at least 16 times, starting with a 1911 Russian adaptation and including Hollywood versions in 1935 with Greta Garbo and in 1948 with Vivien Leigh. Keira Knightley and Jude Law starred in British filmmaker Joe Wright’s 2012 entry. Among the many Russian versions is the 1967 film directed by Alexander Zarkhi and starring Tatiana Samoilova as Anna. Ten years earlier, Samoilova earned international acclaim for her role in The Cranes Are Flying, from Georgian-born Soviet director Mikhail Kalatozov about the horrors of World War II. That film was a tremendous success, winning the Palme d’Or at Cannes and a special prize for Samoilova. Despite the many offers that came her way, she could not take advantage of them due to pressure not to leave the Soviet Union. Anna Karenina is also notable for co-starring famed Russian ballet dancer, choreographer, ballet director, and actress Maya Plisetskaya as Anna’s friend Betsy.

Opening in Los Angeles this month, In Bloom, Georgia’s Oscar entry for the Best Foreign Language Film Award, is a powerful coming-of-age film shot in Tbilisi, the capital of Georgia. It is the debut feature from Georgia filmmaker Nana Ekvtimishvili who co-directed with her German husband, Simon Gross. Set in in 1992, just after the collapse of the Soviet Union, two 14 year-olds, Eka (Lika Babluani) and her best friend Natia (Mariam Bokeria), engage in ordinary lives against sudden, sweeping changes in the social order of the county — including the patriarchal traditions such as early marriage that are starting to crumble.  Members of the community, including Eka’s father, are fighting a war on the Black Sea coast (Abkhazia) that’s never seen but casts a shadow over everything. Natia’s family, meanwhile, is mired in domestic strife fueled by alcoholism. Shot by veteran Romanian cameraman Oleg Mutu, the naturalistic look of the film, and the compelling, non-professional young leads, follow a neo-realist tradition from post-war Italy to modern day Romania.