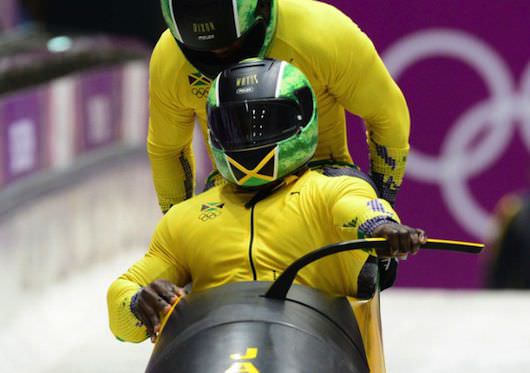 Olympic Stars Who Made it in Hollywood…and 3 Who Should

Like Hollywood, the Olympics has its A-listers. Your Shaun Whites, your Bode Millers, your Apolo Ohnos and Lindsey Vonns. These are the high wattage stars of the Olympics who have returned multiple times (with varying degrees of success) intent on capturing another medal. Then there are the promising young athletes trying their hardest to ascend to the podium, looking for their one chance to be on top. Full of comeback stories, close wins, and triumphs over adversity, the Olympics is a drama ready-made for the silver screen, so it should come as no surprise that Olympians often aspire to the film world. Here are athletes (and teams) whose Olympic success brought them to Hollywood, and three Sochi athletes who deserve their own time in the spotlight.

Sonja Henie, Figure Skater and the “Ice Queen of Norway”

The biggest Olympics-to-Hollywood star is a figure skater most millennials haven’t heard of: Sonja Henie. The Norwegian figure skater wowed crowds, winning the Olympic Singles competition three times in a row, in 1928, 1932, and 1936. She wasn’t all golden girl, however. She invited controversy just before the 1936 performance at the Berlin Olympics. At an exhibition, she gave a Nazi salute to Adolf Hitler, a fan of her figure skating. The action earned her particular disdain in her native Norway, and was one reason she did not perform there for years after she went pro. Following her final Olympic gold, she toured America with her figure skating routine, and then signed a contract with Daryl Zanuck for 20th Century Fox to bring her act to the silver screen.

Song-and-dance spectacles were still king in Hollywood, and Henie aspired to do for figure skating what Fred Astaire and Ginger Rogers did for dancing. Her first film, 1936’s One in a Million, drew on real life. She played an Olympian whose figure skating prowess propels her to Madison Square Garden. Nearly a dozen films followed, including 1941’s Sun Valley Serenade, which featured the Glen Miller Orchestra.

Henie left marks on figure skating even today: She started the trend of females wearing white figure skates, and she shortened the hemlines of the dresses to show off her moves on the ice. Meanwhile, debate still reigns over how damning her interactions were with the Nazi party. Besides the salute, she accepted an invitation to dine with Hitler and personally asked propaganda minister Joseph Goebbels to have Germany release her first film.

Three-time Olympian Shaun White has long been a crowd favorite at the Olympics, and not just because he’s a snowboarder, part of hip boarder culture and maybe the most laid-back group of Olympic competitors. White finished fourth in the half pipe this year, but he still has two gold medals to his name. In 2011, White popped up in Friends with Benefits as a rival for Mila Kunis’ affection. He lost out, predictably, to Justin Timberlake, while remaining one of snowboarding’s most famous names.

There are a lot of unlikely Olympics success stories, but very few end up as Hollywood theatrical releases. Cool Runnings is the exception. The 1993 family-friendly movie was inspired by the four-man Jamaican bobsled team that competed at the 1988 Calgary Olympics. The filmmakers took a lot of liberties, and ended up turning what could have been a dark story about men plucked from the slums of Kingston into a dangerous sport into a story that included plenty of jokes about warm-climate track stars acclimating to the icy environs of their new profession. Audiences responded, making it a word-of-mouth hit that actually earned more in its second week of release. After an absence for some years, a two-man Jamaican bobsled team competed in Sochi last Sunday, where they finished in 29th place in a 30-competitor field.

In one of the most stunning upsets of all time, the United States hockey team beat the Soviet Union 4-3 at the 1980 Olympics in Lake Placid, New York. The U.S. team was by far the underdog, with a team that consisted mainly of college athletes who hadn’t yet joined the NHL. The Soviet team had won gold medals in six of the past seven Olympics. Their players included many active-duty military, who trained in top facilities. The win created an upswelling of national pride and fed into the decades of this intense rivalry that had been brewing during the Cold War. In 2004, the game was turned into the movie Miracle, starring Kurt Russell as coach Herb Brooks.

Thirty-four years later the Russians and Americans had another memorable matchup this year in Sochi. With the game tied, it went into a shootout. According to Olympic rules, the same player can keep taking penalty shots after the first three. T.J. Oshie, who normally plays for the Detroit Redwings, scored four out of the six penalty shots he took, winning the game and repeating, just a bit, another Miracle on Ice.

And this year’s Sochi Stars…

Three former gold medalists were in the running in the women’s half pipe competition: Americans Kelly Clark and Hannah Teter, and Australian Torah Bright. But it was underdog Kaitlyn Harrington, who only qualified for the Olympics three weeks ago, who won gold. With no expectations weighing her down, she outscored the three prior gold medalists in part because she stayed relaxed and kept nailing her jumps. Add in the fact that she’s a daughter of Wyoming cattle ranchers who sold cows in order to pay for her sport, and her win sounds like a success story that’s made for Hollywood.

Most athletes remain poised, even in the face of loss, which is why Ashley Wagner’s frown after receiving low scores for her program during the team event were quickly shared around the Internet and turned into GIFs. Like gymnast Mckayla Maroney’s “not impressed” face that made her an Internet star back in the London Olympics, there’s a chance Wagner could turn her Internet fame into a cameo in Hollywood. But the deciding factor will likely be her performance, not her grimace.  The other big U.S. contender is 18-year-old Gracie Gold, who boasts a Hollywood-ready name and holds the title to the most recent national championship.

On Twitter, Sage Kostenburg declared it was “random” that he made the semifinals of the slopestyle competition. Then he won gold, and declared that he wished it were made of bacon. The impossibly chill snowboarder has already made the rounds on talk shows and late night programs. His easy-going, funny personality is reminiscent of Oscar winner Jennifer Lawrence, who has earned fans for being so down-to-earth and authentic, even after achieving a phenomenal level of success. In Hollywood or on the slopes, that’s one tactic that’s guaranteed to keep viewers rooting for you.