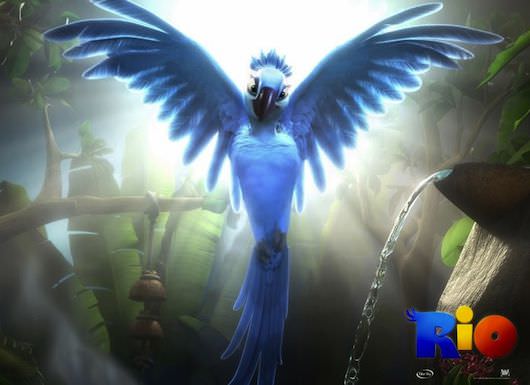 Typically, the job of digital effects animator does not require previous experience working with live explosives. But it certainly looks good on a résumé.

Ilan Gabai, an effects technical director (FX TD) with Blue Sky Studios, can claim that experience. The 33-year-old grew up in Israel and served three years in his country’s defense forces where he handled grenades, mortars, and RPGs. “I got to blow up a lot of things during my training,” says Gabai, who rose to the rank of first sergeant. “I saw what explosions really look like compared to what they looked like on TV or in the movies.”

Gabai moved to the United States after his military hitch and earned a B.F.A. from Pratt Institute in Brooklyn, NY, where his studies included 3D animation.

After interning as an FX artist on the FX Network’s Rescue Me, he joined the show full-time following graduation. “I did a lot of fire, smoke, and debris FX,” he says. Later, he moved to Los Angeles and worked on a number of episodic TV shows (Lost, Eleventh Hour, Fringe) and one live action film (Fast & Furious), before turning his talents full time to his first love, animation. 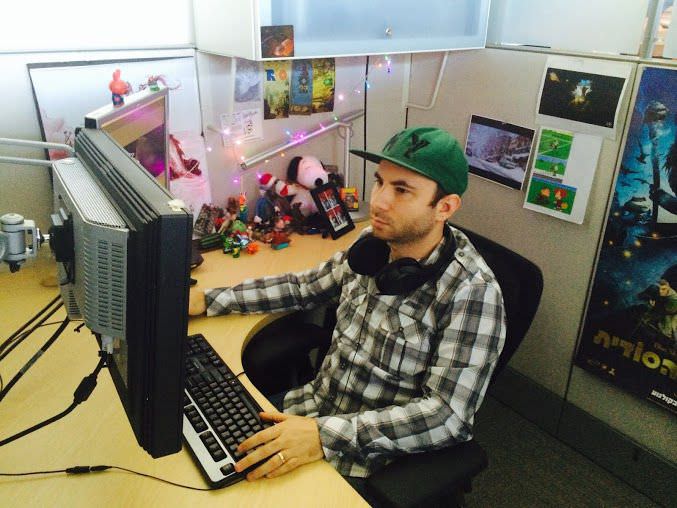 Since joining Blue Sky in 2010, Gabai has made waves — the animated kind — plus sand prints, tear drops, and tornadoes for the Studio’s feature films including Rio (2011), Ice Age 4 (2012), Epic (2013), and the upcoming Rio 2, starring Anne Hathaway and Jesse Eisenberg. He is particularly proud of his work on Epic, a film that received mixed reviews from critics, but raves for its animation. “It’s a perfectly appealing explosion of color for a lazy summer day,” wrote Stephan Lee of Entertainment Weekly.

“Explosion of color.” No small irony there. The Credits spoke with Gabai, who lives in New York City with his wife Laura, a CG lighter, about the curious path that led him from Israel to Rio, his unique coffee splash effect in Epic, and the excitement of taking an effect from scratch to finish for the big screen.

The Credits: Would you start by defining exactly what an FX Technical Director does?

Sure. The FX TD typically designs the effect, engineers it, and also animates it. So it's kind of like a mix of both animator and technical artist. Our responsibilities fall under natural phenomenon, whether it's water, smoke, fire—elements like that. I like to say it’s anything else that is not a character that moves in a dynamic way or that interacts with the character. At Blue Sky we have a character simulation department. But it is responsible for doing clothing, armor, and hero hair.

What were your influences growing up in Israel. Were you always interested in animation?

I have an older brother who got me into Marvel and DC comics when I was pretty young. My mother comes from an artistic family and she always tried to encourage us to be more artistic so as a kid I did a lot of drawing and cartooning. I never got formally trained because we didn't have those kinds of opportunities like we do in the States—I mean training in fine arts and stuff like that. I was also a big fan of Saturday morning cartoons like The Jetsons, Transformers, and G.I. Joe.

How about computers? When did you start working with them?

My dad worked at IBM for a bit back in the 70s so I had been exposed to computers from a young age, starting with a Commodore 64. When I was seven or eight, my mom and dad got me an Etch-a-Sketch animator. I started making my own animated loops and I really fell in love with it. I wanted to find a way to do more stuff like that. Then I started making little films at home with a Panasonic video recorder with a VHS cassette.

What brought you to the United States? Was it for college?

I didn’t plan on coming to college here. My parents got divorced right after my military service and my mother moved to Philadelphia. So instead of taking a trip abroad, which is what most young people in Israel do after their service, I came here to help my mom get settled. I ended up meeting a girl and she convinced me to go to college. But I didn’t know what I wanted to do, and my mom said, “Here you can do anything you want.” And just to put things in perspective, growing up in Israel I wasn't exposed to anything like that. But when my mom said it I decided that I wanted to create video games. And that's what got me exposed to computer animation and the kind of work I do today.

You brought military experience with you to the job. I expect very few FX animators can make that claim.

Yeah. Originally I was supposed to be in a tank, but I’m a little claustrophobic so I became an infantry soldier. At one point I was a grenader. I think that because I dealt with those kinds of things, naturally I had an interest in [FX]. When I started at Pratt I did a 3D animation course. Some people wanted to become modelers—they created 3D models of characters and environments. Some people wanted to become character animators. Some people were interested in lighting. I think I was the only one interested in FX. I was really interested in FX and the dynamics in relation.

How is an explosion different in real life than in a video game or animation?

The stuff that we do in film is artistically driven so it doesn’t necessarily mirror the real world. I actually had to adjust my eye to accept what the directors and what the viewers are looking to see in a film versus what it really looks like. I remember when I first started people would sometimes say, "Well maybe you should make it look bigger and more explosive. More flames.” But when a grenade goes off you don't really see fire bolts flying out. At the same time, you definitely can learn about the motion of the explosion, like the turbulent dust cloud that results. That does help me when I look at FX.

So you have to balance the artistic expression of an effect with the reality of it? For instance, when I see a water effect in a film like Life with Pi, I sometimes get caught up in examining how real it looks.

It is a balance. You don't want it to feel too artistically driven where it doesn't resemble reality. Or maybe sometimes you do. At the same time you have to take into consideration the composition of a shot, like if you're creating a splash, there are ways to simulate it that are physically correct, but that's not necessarily going to draw your eye to where the attention is supposed to be in the scene. So sometimes we have to direct the splashes to direct the viewer’s eye. 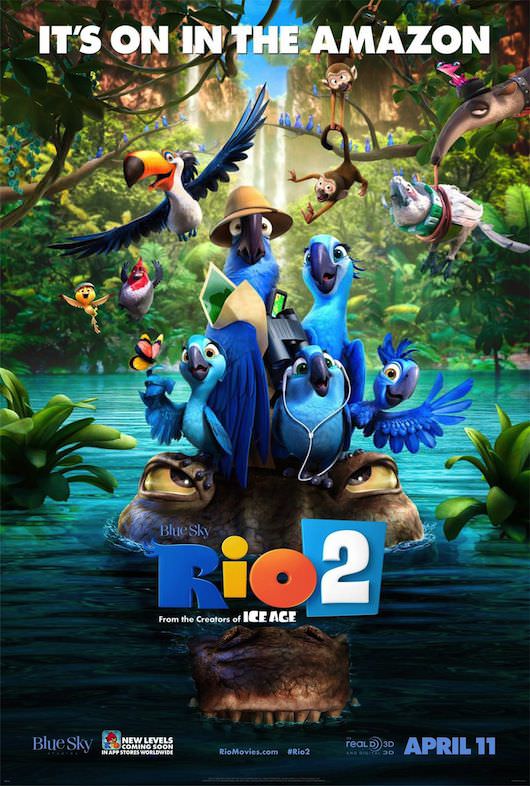 Your team at Blue Sky was nominated for a 2014 Annie Award by the International Animated Film Association (ASIFA) for Epic. Is there an effect in the film you’re most proud of?

The coffee cup splash. It’s a shattered glass sequence where basically the coffee cup shattered in slow motion, splashing coffee on Ozzie the dog. In fact, I gave a talk about it at the SIGGRAPH Conference last year. I call it my hero shot because it was the hero of the shot — the main sequence.

Take me through the process of designing and creating an effect using the coffee cup splash as an example.

Before we even get a scene we run through the storyboards and animatics. We get an early idea of what every sequence is looking like and every type of effect that we have to do in it. Then generally it goes through stages of building it in CG, rigging it, animating it, and then we usually come into the picture after animation is done or 90 percent there. For the coffee cup splash, one of our artists was already working on the cup shattering. It's a slow motion shot so that made it a little more difficult for me because the animation came in slow motion. In order to simulate dynamic effects, it takes into account a lot of real world physics, or physical properties. When you have something in slow motion it changes up the mix a bit.

What was your first step?

I started to flesh out timing and what the splash would look like, just by doing various iterations and building up an effect, kind of like you would build up a painting — you would start with broader strokes and then you would create the more finer strokes. And so I started with a very broad, general kind of splash look but it wasn't very detailed just to get timing and scale into the shot and then get feedback from the director. We do a lot of dailies pretty much every two days. And we would review with the director and with the art director and with supervisors, and us artists would sit in on the meeting. We'd get feedback and I’d make new iterations and then a few days later show it again. We’d also do drive-bys with the AD where he swings by your desk to look at the shot and discuss it. After a few iterations I knew exactly where I had to go with the coffee splash and so I just continued to built it up and finalize.

Did you do any research for the effect?

We do a lot of research. We filmed footage of splashing water and splashing coffee outside. In my building where I live I have a swimming pool, so I spent many hours in there examining the way that water splashes. We also looked up a lot of footage online. There’s this great YouTube channel [The Slow Mo Guys], where they film everything at high speed and blow things up. Shatter or break things. And one of the videos they have is actually a fracturing mug filled with hot tea shot at 10,000 frames per second.

How long did it take to create the effect from start to finish?

About three weeks. It’s maybe a 10- or 15-second sequence on screen. You can see why it takes up to a year do a whole movie.

Now that you’re well-established in the industry, what influences your work today?

I still watch a lot of cartoons. My wife works in the industry, so she likes watching them with me. I love watching movies in general. I guess for me, I’m inspired by a lot of things. I live in one of the most exciting cities in the world, right near Museum Mile so we go to the museums a lot. I also go to Central Park a lot. I love people watching. I love the street art in this city. And friends I interact with influences me too.

Do you have a favorite museum?

Yeah. The Museum of Natural History. I love the planetarium, and I love dinosaurs. I visit the dinosaurs quite often.

I'm lucky to have had the opportunity to work on movies like Ice Age. But I definitely loved dinosaurs way before the movie came out.