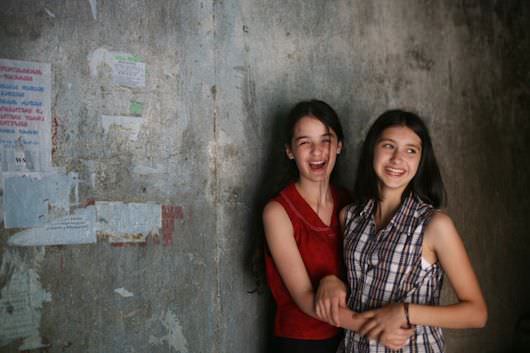 Georgian Filmmaker Nana Ekvtimishvili on her Powerful Debut In Bloom

The debut feature from Georgian filmmaker Nana Ekvtimishvili, In Bloom, is a powerful coming-of-age story that takes place in in 1992, just after the collapse of the Soviet Union. Shot in Tbilisi, the capital of Georgia, it’s about two 14 year-olds, Eka (Lika Babluani) and her best friend Natia (Mariam Bokeria) whose ordinary lives—school, friends, domestic strife—are set against the sudden changes to the social order of the country as well as a backdrop of war in the Abkhazia region. Ekvtimishvili, who attended film school in Potsdam- Babelsberg, Germany, wrote the script based on personal experiences, and co-directed it with her German husband, Simon Gross. The Credits spoke to Ekvtimishvili via Skype from her home in Tbilisi. 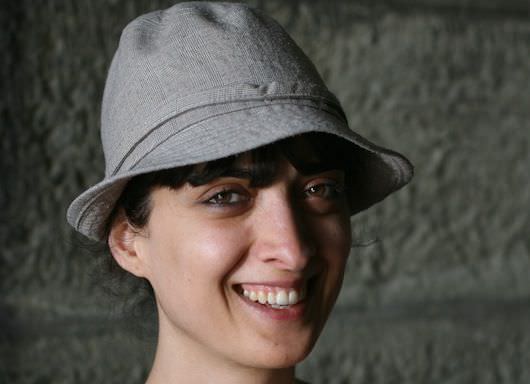 Georgia isn’t far from Sochi, so I have to ask: is there much interest in the Olympics there?

In Georgia, most people didn’t want Georgians to go to the Olympic games because two Georgia territories [South Ossetia and Abkhazia] were taken by the Russians in an occupation. It was a big issue [during the Sochi opening ceremony] when Sochi showed a map of Georgia and these territories were cut out. In Georgia, no one wants to lose these territories; they are part of Georgia. So many did not want to participate [in the Olympics]. It’s not welcoming mood.

Have things changed in Georgia since the ‘90s? The film depicts breadlines, the pressures to marry for young girls…

A lot of things have changed. At the time, under president [Mikheil] Saakashvili, we had no electricity, sometimes no water, and sometimes nothing to eat. There have been economic improvements under Giorgi Margvelashvili. But Georgians need changes in society, in the minds of the people, not just visible changes like safer streets and buildings and the economy, but what people think and what values they have. We need better dialogue among ourselves because, in Georgia, we have controversial subjects such as religion and gay rights. It is time for Georgia to go in a healthier direction.

In the film, one of the girls faces pressure to marry young. Does that still exist?

I would say there is still pressure. The role of women is so deep in Georgian tradition that you need generations to change. We don’t have kidnapping as much, ‘bride-napping’ they call it, but people still marry very young. They live with their parents and don’t manage their own lives, they have no money, no jobs and can’t have a boyfriend or girlfriend unless they ‘legalize’ it. Even at 17 or 18, most parents think it’s better to have them married. I just read a statistic that for 2013 that said seven thousand girls in Georgia left school to marry. And if you ask them, they say they did it because they wanted to, that it’s not a problem. That’s why it’s important to talk about it—and to show it in movies.

Was that one of your motivations to make the film?

Honestly, this all came later. At the time, even I didn’t think of it as a feminist issue. I just had the idea of two girls as main characters, and it came out as this difficult childhood in a difficult country. There are still cultural pressures. A woman is more valued with a husband and children. Georgia is a war-torn country; the last war was in 2008. My personal opinion is that when so much war happens, people think, ‘we have to have children, men must defend us, we need this power, women can’t do anything against the enemy.’ That’s why education is so important in these kinds of cultures.

Did you grow up watching films? Did that have an influence on you?

Yes, of course, because I like Georgian cinema. During the period we call Soviet cinema, the most interesting films were by Georgian directors or were set in Georgia. I’ve seen these movies hundreds of times. They were part of our lives, our family’s lives. There are simple people who don’t have anything, yet they love Georgian cinema. As a child, whether on TV or in the cinema, I saw only Georgian films from silents to modern, so yes, it influenced me.

How did you find the two young girls who play the leads? They're extraordinary.

They are schoolgirls. We found Lika in a school in Tbilisi. Mariam we just saw walking in the street. They didn’t know the process; they just followed us and had fun coming to casting meetings and an intensive rehearsal period. The main focus for me and Simon was to let them be who they are and not to direct them into something else. We wanted their own natural characters. We just tried to find them and it worked.

How important was the cinematographer Oleg Mutu, who is Romanian, to the look of the film?

We’d seen all of Oleg’s movies and we felt that his camera was extraordinary because it’s part of the story; it’s not an observer, it’s very close to the characters, so we wanted to work with him. We wanted an intimacy with the characters.

What is the climate in Georgia for filmmakers? Is there any funding?

It’s very difficult in Georgia. After the breakdown of the Soviet Union, we did not have any [infrastructure], but now it’s better. I started writing the script while I was in film school in Germany, after that we found money from the Georgia National Film Center which gave us 100,000 Euros. So then we looked to Germany and France. You must have money from your own country first before you ask for a co-production, but without [the help of money from other countries] it’s almost impossible to do a film in Georgia. The Georgia National Film Center gives money to only two to four films a year for whole country. If we didn’t have it, we would not be able to find other financing.

So it must be gratifying that the film’s been so well received.

Since our premiere at the Berlinale last year, our film has played in two of the three cinemas in Tbilisi and more than 27,000 people have seen it, which is good for an art film. I didn’t expect people would love a film that’s about a difficult, dark time that some would rather not remember, but they liked that it came from the point of view of two girls.