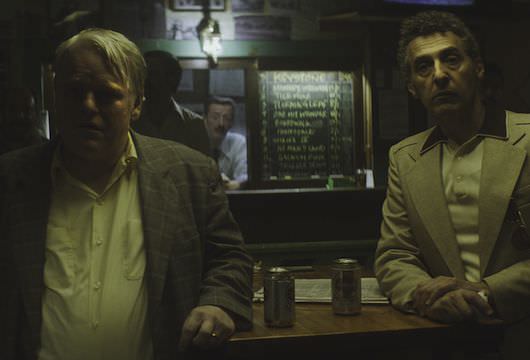 If you’re going to peel yourself out of bed at the crack of dawn to attend a screening, it might as well be of John Slattery’s feature length directorial debut, God’s Pocket. Adapted from the novel by Peter Dexter, Slattery has recruited fellow Mad Men star Christina Hendricks as Jeannie Scarpano, and a slew of heavyweight male actors to inhabit the insular, violent, and often very funny world of the titular South Philadelphia neighborhood where the film is set. The cast includes Philip Seymour Hoffman as Mickey Scarpano, Jeannie’s kind-but-crooked husband, John Turturro as his partner in crime, Richard Jenkins as alcoholic columnist and local celebrity Richard Shelburn, and Eddie Marsan, as funeral home director Smilin’ Jack Moran.

Mickey has to deal with the increasingly absurd repercussions when his unhinged, pill-popping stepson Leon (Caleb Landry Jones) is killed in an ‘accident’ down at his job. Jeannie is beside herself with grief and convinced something else happened down at the yard (it did, he was murdered). All Mickey wants to do is please his beautiful wife and give Leon a proper burial, but Jeannie’s demands for the truth, Mickey’s own debts, Richard Shelburn's poking around, and a neighborhood of scheming opportunists make it nearly impossible to get Leon into the ground. It should also be noted that just about everybody in God’s Pocket, perhaps with the exception of Jeannie and her increasingly furious sisters, is a drunk or an aspiring one. 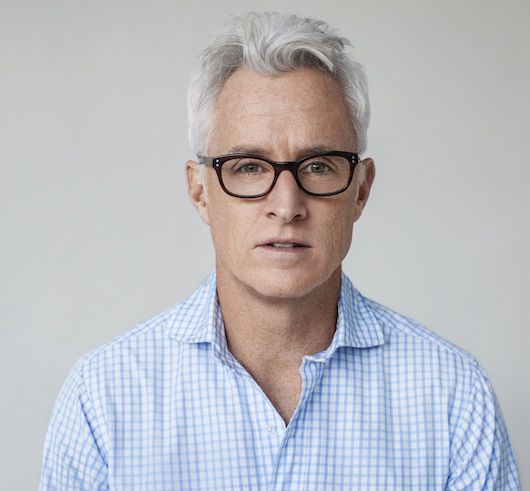 Slattery adapted Dexter’s book for the screen along with Alex Metcalf, and the film is so steeped in place, the hermetically sealed neighborhood of the film’s title, that he was hell-bent on finding a proper, Philly-based location to shoot it. However, the exigencies of the film budget, actors schedules, and the million other priorities that make up a film production forced Slattery and his crew to scout all over the East Coast.

The neighborhoods in Philadelphia they scouted (Fishtown, South Philly), were too beautiful and built up, they didn’t quite fit with Dexter’s low down, scheming neighborhood. The scouts went up to New York City and shot some locations in Brooklyn, Queens and in the Bronx. “Every picture that the scouts had sent me, I kept saying, ‘No, it has to be this Philly neighborhood,’" Slattery said during a round table interview, but nothing he had seen seemed to quite fit. A scout sent photos back from Yonkers in upstate New York. “We were disappointed and disheartened and thought, ‘Well, f**k it. Let’s just go upstate to Yonkers and see what that looks like.’”

Yonkers turned out to be a blessing. Hilly, gritty, with derelict signs and abandoned businesses that ended up being a boon for the film. One particular location, the Flower Funeral Home (the sign is missing the ‘O,’ a source of laughter in the theater) run by Smilin’ Jack Moran, was a dream. “That funeral home is an actual abandoned funeral home that they left because it was less cost effective to renovate than to just build a new one on the top of the hill. It hasn’t been in operation for thirty years. We found this place, with the ‘O’ that’s missing in the sign. And the ‘O’ is sitting there when Smilin’ Jack comes around the desk in the film. Someone had moved it when we were filming and I said, ‘Hey, where’s that O? Put it back!’ The photos on the wall, the caskets, all real—they gave it all to us to use.” Slattery was able to shoot crucial scenes in a real flower shop (the same one from Jim Jarmusch’s Broken Flowers, no less) and a meat plant.

Other elements fell into place for Slattery, including realizing that the woman who should play his suffering, complex Jeannie is someone he already works with. “I was directing an episode of Mad Men, and we were lining up a shot of Christina’s face,” Slattery says, who at the time was working on the “fourteen-hundredth draft of the script,” when it hit him. “I thought, ‘Wait a minute, Christina is Jeannie.' Someone for whom you would jump through a plate glass window to stay with. It wasn’t just the way she looks, which is just ridiculously beautiful, but she’s emotionally so transparent and smart. And as an actress, she can do anything.”

As a seasoned actor, Slattery got his directing chops up filming five very well regarded episodes of Mad Men, including last season’s tenth episode, “A Tale of Two Cities,” which featured a prominent storyline for Hendricks. Going behind the camera for his first feature film allowed Slattery the ability to solely focus on directing, something he prefers to do. He said acting in something he’s directing is one of his least favorite things to do on a set. “It just cuts everything in half…it cuts your concentration in half.” The only role he felt he that he might have played, had the situation been different, was the lecherous columnist played by Richard Jenkins. “But if you can get Richard Jenkins, why would you want to do anything else?” Slattery asks. “The guy is…I love that guy.”

There are roughly a dozen fantastic character actors who populate God’s Pocket and give it a flavor and personality Slattery used to turn Yonkers into a credible, yet wholly distinct version of, Dexter's God's Pocket neighborhood. Crediting New York casting director Susan Shopmaker, Slattery rattled off a list of fine actors taking up minor roles as barflies, butchers, and used car salesmen. The veteran actors Bill Buell and Prudence Holmes play a pair of drunks (he always in a neck brace, she offering condolences and gossip nobody wants to hear), Lenny Venito plays the car salesmen Little Eddie, and Carmine Famigliette plays Nick, a butcher—all of them are given memorable, even crucial moments in the film. “All of them are New York actors,” Slattery says. “That was the good thing about shooting in New York, you have this incredibly deep reservoir of performers to choose from.”

And then there’s Hoffman, in the title role. Reflecting on being both an actor and a director, and what might change when he gets behind the camera, Slattery jokes that you realize actors can be a pain in the ass. Yet when speaking about his leads, he, probably more so than many directors who have never gotten a bad acting review in their life, understands them. “You know Phil Hoffman doesn’t do anything like anybody else. We did that scene in the bathtub, and it’s much more emotional than the piece we ended up using. He just sits there and falls apart. He did this five, six takes of this, and I’m thinking, ‘How many people, in the world, can come in, get undressed, get in the bathtub and completely emotionally fall apart five takes in a row? And then get up, put a robe on, and go back to his room. No one can do that. Certainly not the way he does it. There were many times I was looking at the monitor and thinking, ‘I know I just got something, and I’ll figure it out when I get into the editing room, but I know that that was something remarkable.’”