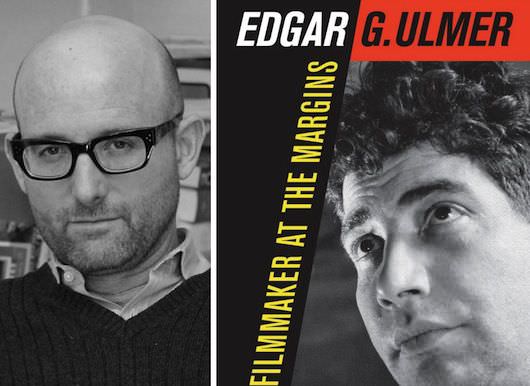 Long considered as something of a guilty pleasure among filmmakers, critics, and fans, director Edgar G. Ulmer finally gets the attention and scholarship he deserves in Noah Isenberg’s new book: Edgar G. Ulmer: A Filmmaker At The Margins. Ulmer was ambitious, and a teller of tall tales about his career: it might never be possible to untangle fact from fiction on his early years in Vienna and (maybe) Berlin.

After being hired by Universal studio head Carl Laemmle on one of his European trips to search out new talent, Ulmer emigrated from Vienna. He began his Hollywood career in the mid-twenties as an un-credited director, along with William Wyler, on two-reel westerns. He also worked as an assistant art director for F.W. Murnau on Sunrise (1927), and possibly his later American pictures. In 1934 Ulmer was given his chance to direct a top studio picture, the horror vehicle The Black Cat, starring Boris Karloff and Béla Lugosi. Brilliantly designed and photographed, Ulmer pulled out all the stops to show what he’d learned in his apprenticeship years, and his debt to Murnau and German Expressionist cinema is clear. His career as a studio director under contract seemed assured as the picture was a box office success.

Yet he fell in love with, and later married, the wife of studio head Laemmle’s favorite nephew, who was a producer on Ulmer’s horror picture. Laemmle effectively blackballed Ulmer from Hollywood, and he would spend the rest of his 35-year career working at the margins of the industry he so wanted to be at the center of. Recognized for his hard work and talent by poverty row studios and independent producers, Ulmer churned out low budget pictures that ranged from impersonal junk to minor masterpieces. His contribution to the film noir genre is enormous, with Strange Illusion (1945), Detour (1945), The Strange Woman (1946), Ruthless (1948), and Murder Is My Beat (1955), as standouts. Many of his horror and science fiction films are equally impressive. Besides The Black Cat, there is Bluebeard (1944), The Man from Planet X (1951), Daughter of Dr. Jekyll (1957), The Amazing Transparent Man (1960), and Beyond The Time Barrier (1960). He worked in nearly every genre. The Naked Dawn (1955) is one of François Truffaut’s favorite Westerns, and he cited it as an inspiration for his film Jules and Jim (1962).  As Peter Bogdanvich has remarked: “The career of director Edgar G. Ulmer, one of diehard film buffs’ major cult favorites, is an object lesson in the triumph of talent, courage, ingenuity and passion over time and money.”

We spoke to Noah Isenberg about his new book about possibly one of our first indie filmmakers.

When did you become aware of Ulmer’s films and what drew you to his movies initially?

When I was a graduate student at Berkeley in the early 90s, I was a PA in a noir film history class, and we saw a shitty, pockmarked, 16mm film print of Detour, and I was blown away. I couldn’t believe the dramatic power of the film, the visual allure of it, and those performances. David Thomson, in his Biographical Dictionary of Film, makes this wonderful remark about the performances, to the effect (and I’m paraphrasing), “are these real actors, or are they derelicts?”

[Later], at Wesleyan University…I would teach regularly Weimar Cinema, which I continue to do, and I’d show The Black Cat, kind of as the afterlife of Weimar Cinema, and I would teach a number of the films on which Ulmer claimed to have worked, and yet there is not much documentation that he did in fact work on them, like Der Golem, and all the others he rattles off in his interview with Peter Bogdanovich in 1970. Then I wrote my initial piece on Ulmer in 2004, in Cinema Journal. It was a piece in which I really wanted to apply some pressure to the idea of “exile” and how it figures in both Ulmer’s films and career. On the basis of that article I secured a contract with University of California for this book…I try very hard in the biography to show some balance – there are certain moments where I am truthfully in awe of some of the things he managed to accomplish given the constraints, and yet at the same time I wanted to give balance to some of the more hagiographic treatments he had received.

Was some of that because of how he was portraying himself and career in those interviews from the 60s and 70s that at the time couldn’t be corroborated?

Exactly. If you take [what he said about himself] at face value, then he is some kind of Übermensch – he was everywhere. He does [portray himself] as a Zelig type figure.

Ulmer does seem to have infused most of his movies, with their low budgets, short shooting schedules, and sometimes, ridiculous scripts, with some of his personality and interests, in fine art and music for example. Given how poor some of the films are, do you think they can be seen as a type of validation of the auteur theory?

I’m not in anyway partisan to auteurism at all, but one of the things that I do in the book, whether it’s wittingly or unwittingly I may not know, is when getting at all of Ulmer’s different personal aspects, it does kind of square with an auteurist approach. However, there are other aspects of his films where I show, or I hope I show, that you cannot in any way apply authorship.

How does his long term stint at PRC, the “poverty row” studio, square with this approach?

PRC is a great moment in his career, because the poverty row studio completely cuts against the model of classical Hollywood filmmaking in the studio era. Ulmer as a director at PRC, basically has artistic free reign over what he does, and serves, especially late in his four year, 11 picture stint at the studio, more or less as a kind of head of production. He’s really calling the shots. As a result, despite some of the dross that he had to churn out, he was rather fond of those years. There was a kind of freedom there.

But Ulmer was somebody who, at certain moments, whether they were fleeting or not, I think wanted that prestige, wanted to be a big man on Paramount’s lot. These assertions will not make me a lot of friends with some of the early champions of Ulmer. They don’t want to believe it. They didn’t have these letters, but I don’t think they want to believe it. If this is a man who can make Thanksgiving dinner out of a rat – that’s a better story.

How do you see Ulmer’s legacy toady?

I think that he is, and could become, the guru of the DIY filmmaker generation. People are shooting on iPhone’s now, editing features on their laptops — carrying [the production and style] down to total minimalism. I was thinking again recently about the Peter Bogdanovich interviews – they are enormously important. The moment in time Bogdanovich recorded these three interview sessions in 1970, where the retired Ulmer gets to tell this glorious tale of his career, is only a year before he makes The Last Picture Show (1971). You can see the influence that Bogdanovich’s subject had on him. It’s like Truffaut and the French New Wave critics, they would interview Hitchcock, Ulmer, Sam Fuller, Nick Ray, and it was conversations with “the Masters” so to speak. I think if we’re going to regard Ulmer as a Master or mentor in any way today, it’s got to be for the neo-indie wave, getting filmmaking done on the cheap. This was, of course, a mixed blessing for Ulmer–he was able to attract work based on his reputation for churning out superior flicks on a girdle-tight budget, but he carried the stigma of being a B-movie director for nearly his entire career.

We asked Noah Isenberg if he could discern any Ulmer like traits based on descriptions of the movies in the 2014 Sundance Film Festival Dramatic Competition lineup. Here are some of his thoughts.

The great Andrew Sarris once memorably quipped, "anyone who loves the cinema must be moved by Daughter of Dr. Jekyll." What beguiled Sarris, and what beguiles us today, is how such a cheap little horror film could be so visually affecting. Many filmmakers have tried to take a page out of Ulmer's play book in this department, and it appears that Jeff Baena, in his ghoulish debut feature, is hoping to revive that spirit once more.

Ulmer's Detour has long been a touchstone for peddlers of noir and neo-noir, burrowing itself–at least in distorted or disguised form–into such films as David Lynch's Lost Highway and the Coen brothers' The Man Who Wasn’t There, and surely has inspired younger filmmakers to test the possibilities of noir on a shoestring budget. Jim Mickle's film may not be a faithful reworking of Ulmer's most storied production, but I'd be surprised if it didn't leave the same dirty, nasty residue on Mickle as it has on audiences since its release in November 1945.

Ulmer's ethnic films from the late 1930s and into the 1940s — his two Ukrainian operettas, his four feature-length Yiddish pictures, and especially the great all-black musical drama Moon Over Harlem –apply pressure to the drama of assimilation and the social forces that push people to the margins. Although his ethnic films may not be the most influential among people making movies today, they still have a great deal to say to a generation invested in sorting out the same questions he was addressing three quarters of a century ago.

Many of Ulmer's films handle music almost with a kind of maniacal zeal–think of Al Roberts's frenzied jazz improvisation in Detour or Ulmer's tribute to one of America's most sacred shrines in Carnegie Hall — and it's not hard to imagine him appreciating the kind of passion, monomaniacal as it may be, depicted in a movie like Whiplash (or just a few years back in Darren Arnofsky's Black Swan). He was utterly obsessive about music, his first passion, even above film, and was known to use a conductor's baton on the set.