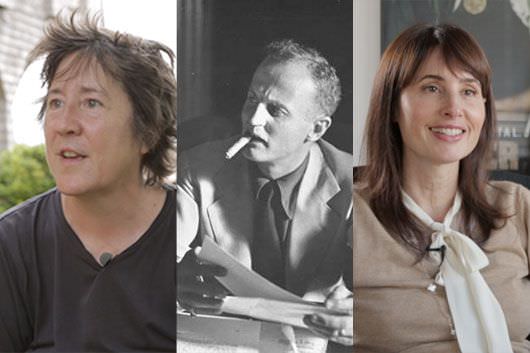 From Darryl F. Zanuck to Christine Vachon: The Quotable Producer

Jerry Weintraub, a legendary film producer, took to the stage this past Sunday to accept the Golden Globe for best TV movie or miniseries for Behind the Candelabra. The film was the work of a slew of super talented individuals coming together to create something original and daring. Some of those people include the director Steven Soderbergh, his two stars, Michael Douglas as Liberace and Matt Damon as his young lover Scott Thornson, the incredible crew (the lavish costumes and fantastic set design are particular standouts), the creative team at HBO, the list is long. There were more than 300 people who pitched in to make this fantastic film. And then the film wins the top prize for best in its class and it’s the producer who takes the stage and the award. Weintraub is a thoughtful and highly regarded producer, and he noted this ritual in his acceptance speech; “We got a lot of craft awards this year, which I’m really happy for. They do all the work and I get all the credit.”

Although the truth is, producers are not just suits with connections whose sole job is to cut checks and harangue creatives. Producers like Weintraub, or the late, legendary Run Run Shaw, who practically invented the kung-fu genre and helped get Blade Runner made, are indispensable to the creative process. As people who rely so heavily on being able to manage disparate personalities, a thousand moving parts, and see a film through the entirety of its creative process, they’re often some of the most quotable people in the business.

With that in mind, here’s a selection of some great quotes from producers over the years.

“I just don’t believe that you can’t make anything happen. I think if something’s good and you believe in it, and you care about it, and you give it love and nurture it, it’s going to happen.”

“If you lived in a provincial town like Torre Annunziata, where there was nothing to do in the evening but go to the movies with your friends, the cinema was a world of fantasy. I had always been in love with it.”

Dino De Laurentiis, the Italian born producer of films that include Serpico, Death Wish, U-571 and Hannibal.

“It doesn’t have anything to do with the budget of the film. It has to do with the scope and scale of ambition, and the skill that people brought to it to realize that ambition.”

“If you’re going to spend two or three years of your life working on something, you’ve got to be making the kind of movie that discusses and influences the culture and is engaged in the world you’re living in.”

Scott Rudin, one of the most prolific producers in Hollywood, who lists Wes Anderson's upcoming The Grand Budapest Hotel, the Coen Brothers Inside Llewyn Davis and Paul Greengrass's Captain Phillips among his many credits.

Gale Anne Hurd, talking about the importance of shooting in actual locations, producer of some of the greatest action films of all time, including The Terminator, Aliens, The Abyss, and Terminator 2.

Darryl F. Zanuck, legendary producer of films like All About Eve, Grapes of Wrath and The Longest Day.

“In film producing, there is an inherent tension between the director, the money and the producer, and that's what keeps it flowing and honest and accountable.”

Christine Vachon, one of the most prolific independent film producers working today, with films like Poison, Boys Don’t Cry, I Shot Andy Warhol, and I’m Not There on her resume.

"We gave the pilot to Rob and he just wouldn’t read it, and it sat there for week after week and every week, and every week we’d be like, You have to read this script, it’s amazing,' and he’d say, 'I’m not doing a show about a crystal meth dealer, are you on crystal meth?'”

Christina Wayne, one of the executives who helped push both Mad Men and Breaking Bad into reality, on getting her boss at AMC to finally read Vince Gilligan's pilot.

“I've always believed in going after writers. I've been criticized for it to. I've turned down big stars for things and I've lost friends over it.”

“I fell in love with the book and I couldn’t imagine it not being made into a movie. I’m sure many teens who love the book thought the same but luckily for me, they weren’t producers.”

“Now, in studio meetings, well-intentioned studio executives bandy around the word ‘sympathetic’. They say things like, ‘that character is not sympathetic. This character is not likeable’. This term is incorrect and if actually followed, as often happens without a strong Producer we end up with a bland character and, quite frankly, a boring movie. The correct term would be interesting. Why is the character interesting?”

“Our goal is to move as quickly as we can, and we’ll see what happens. The timetable we care about is getting the story.”

Kathleen Kennedy on securing J.J. Abrams and dealing with the intense scrutiny involved in producing the upcoming Star Wars film, to Slashfilm.

Samuel Goldwyn, producer of films such as The Best Years of Our Lives, Guys and Dolls, Wuthering Heights, and the ‘G’ in MGM.

"The great thing about a trilogy is that it feels like you’ve got a beginning, a middle and an end. It’s like an extended version of a regular film. Once you get into a fourth film then it’s just episodic, and I just can’t see him getting excited about making another film where basically you’re just wheeling in different villains.”