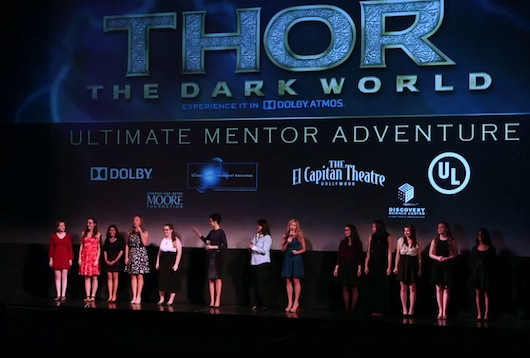 Ten high school students at the top of their science game took a trip to Hollywood to meet the cast of Thor and visit with a host of inspirational women scientists along the way.

When Aurora Hake, a ninth grader at Annie Wright School in Washington, heard about Thor: The Dark World Ultimate Mentor Adventure, she immediately began preparing her video application. The contest—a joint venture designed by Marvel, the National Academy of Sciences and Underwriters Laboratories—was inspired by the character Jane Foster, an astrophysicist and Thor’s love interest, played by Natalie Portman.

The contest challenged high school girls to reach out to a female scientist—real-life Jane Fosters—and interview her about her work and experiences. After the interview, contestants produced a video about what they learned and why they love science.

Hake researched mentors in her area and found Anna Goussiou, a particle physicist at the University of Washington. “The things she’s doing are so huge, but she still took the time to explain such a huge thing to a ninth grader, in a way I can comprehend and enjoy hearing about,” she reflected in her video contest entry. Channeling Jane Foster, she explained her motivation to pursue a career in science, “Everybody has potential, but it shows what kind of person you are if you use that potential or not.”

Last month, Hake came one step closer to realizing that potential, when she was selected as one of the contest winners. She joined nine other girls (Hake was the youngest) for the red carpet premier of Thor: The Dark World, held at Hollywood’s El Capitan Theatre, and met dozens of inspirational women scientists along the way.

The great adventure for Hake and her high school colleagues all began with a phone call from Disney a few months before the movie’s premier. Lizabeth Fogel, director of education at The Walt Disney Company, realized that Portman’s Jane Foster had potential to be more than just an entertaining movie character. She reached out to collaborators at the Science and Entertainment Exchange, a National Academy of Sciences group that connects directors, producers and screenwriters with scientific experts. Together, they brainstormed ways for Jane Foster’s character to act as a role model to inspire young women to become more involved in the sciences—something that is too often sorely lacking in largely male-dominated fields such as technology, mathematics and physics. “We hatched this idea up on the phone of creating a mentorship adventure,” says Ann Merchant, deputy director of communications at the NAS. “For girls to think a career in science and engineering is possible, they need to see women in the real world doing this.”

From around 300 video entries, judges narrowed the group down to just 10 winners. To make those difficult decisions, scientists viewing the videos followed a strict pre-set rubric—which did not necessarily favor the most conventionally qualified candidates. “We wanted to pick girls who would find the experience meaningful and useful, not just someone ticking this off their list for college applications,” Merchant says.

Based on those guidelines, Hake was a perfect candidate. “I plan to go to school for either electrical engineering or theoretical physics, but I don’t know what kind of career I’d want to go into,” she says. “I do know, though, that the [Ultimate Mentor Adventure] experience really taught me a lot about being confident in myself, and following what I want to do.”

Portman’s Jane Foster—a strong female scientist—is an encouraging example of the increasing number of women excelling in STEM careers. But until very recently, that was not the case, and many of those fields still tend to be dominated by men. Indeed, in the Thor comics, Jane Foster’s character was originally a nurse. But in an initial plot meeting about the first Thor movie, scientific advisor and California Institute of Technology physicist Sean M. Carroll pointed out to the writers and directors that Jane Foster could better serve the film if she was an astrophysicist. “Narratively, it made sense for her to be able to better participate in the story by being an astrophysicist,” Merchant says.

Natalie Portman supported the decision. “The truth is, I really do love science,” she said in a video promoting the Ultimate Mentor Adventure. “This role gave me an amazing opportunity to explore science, and all of its possibilities.”

Likewise, the Ultimate Mentor Adventure creators hoped to give the young winners an opportunity to delve into such explorations. STEM subjects—science, technology, engineering and mathematics—span an incredible diversity of potential career pursuits, from geology to robotics to computational biology. The winners received a crash course in some of the possibilities offered within these expansive fields, meeting an array of scientists and visiting numerous labs, including a behind-the-scenes peek at the engineering and physics that make Disney theme park rides possible, and learning about the underlying principles of neuroscience supporting Dolby technologies.

In addition to talking science shop, female researchers shared their personal stories and answered questions from the girls.

“For me, this really brought me back to that time in my life in high school when I thought I had to have everything figured out,” says Sarah M. Escosa, a staff engineer at Underwriter’s Laboratories who served as both a mentor and a guide during the girls’ visit. “I told my mentee and the other girls to find something they’re passionate about, don’t think that you have to know everything or that you have to know exactly what major you want, and don’t be afraid to ask for help.”

At the end of the educational tours, the girls joined the cast of Thor on the red carpet for the movie’s premier. Merchant emphasizes that the Ultimate Mentor Adventure’s success is largely due to its connection with the movie and its integral part in glamorizing the idea and getting the word out. “Kids paid attention to this contest because it was connected to Disney, Marvel and to Thor,” she says. “We didn’t realize how great of an idea this was until we were done and saw the results.”

She adds plans are in the works to create similar contests in the future, aimed at both boys and girls, and especially targeting underprivileged groups. Now, the team just has to find the right television or movie to support such an endeavor.

“It’s not Hollywood’s responsibility to make sure Jane Foster’s character is a motivator,” she continues. “But if Hollywood can do both at the same time—entertain and motivate viewers, as they did naturally with Jane Foster—that’s the best of both worlds.”