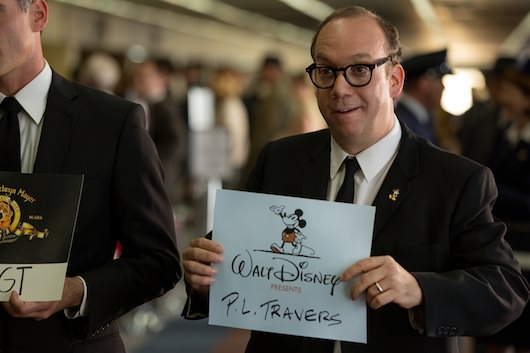 By By Max Lark, Courtesy of The Walt Disney Company

As Disney’s Saving Mr. Banks debuts, step back in time to discover the story behind the making of Mary Poppins and the inspiration behind one of the greatest and most beloved films ever made.

A rehearsal room in the Animation Building—suffused with sunlight and equipped with storytelling necessities: an upright piano, storyboards, a table and a couch. 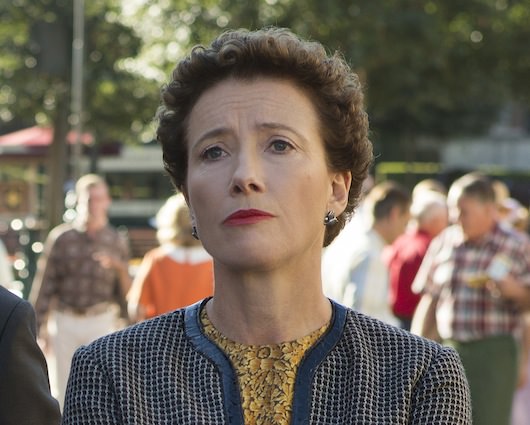 CLOSE ON THE FACE OF PAMELA LYNDON (P. L.) TRAVERS: the prickly author of a series of fictional books about a governess with the impeccably spot-on name of Mary Poppins. She sits stiffly at a table near a tape recorder, which is recording, at her insistence, the cantankerous conversations between Walt Disney’s ace story team—brothers Bob and Dick Sherman and Don DaGradi—and the decidedly unimpressed Travers. The three pitchmen have two weeks to cajole and convince the imperious English author to let the Disney Studios bring their musical version of her Mary Poppins stories to the big screen.

CUT TO: Don and “the boys” pitching a new number, “Fidelity Fiduciary Bank.” “If you invest your tuppence wisely in the bank, safe and sound,” the lyrics begin, but as the song grows increasingly frantic, so does Mrs. Travers’ subconscious. Her mind awhirl, she mentally leaps back in time to another sun-drenched place and a similar exhortation of fiduciary responsibility.

DISSOLVE TO: A local fair in the sun-baked town of Allora, Australia, 1906. A handsome young banker named Travers Goff (Colin Farrell) stands unsteadily on a creaky wooden dais, nervously addressing the gathered audience on behalf of his employer, the local bank. The hands holding his notes tremble in the humid air, and soon he is prattling more than talking. He is, quite clearly, drunk. As things spiral out of control, he calls out to his daughter Ginty—the young P. L. Travers—to join him on stage.

INTERCUT BACK AND FORTH BETWEEN: the pitchmen acting out “Fidelity Fiduciary Bank” in the rehearsal room at the Disney Studios and the Allora Fair until the two scenes collide when Goff, now standing less stoutly on the dais, improbably begins singing “Fidelity Fiduciary Bank.” “All manner of private enterprise!” he sings venomously, brilliantly capturing his disgust with how fiduciary concerns can corrode spirit and soul. The experience clearly continues to haunt Mrs. Travers.

During this climactic sequence in Saving Mr. Banks, director John Lee Hancock (The Rookie, The Blind Side) ingeniously fuses this amazing film’s two basic storylines: P. L. Travers’ visit to the Disney Studios in 1961 to approve the script being developed for a Disney movie based on her Mary Poppins stories, and her troubled childhood in Queensland, Australia, at the turn of the century. It’s a jaw-dropping feat of directorial legerdemain that dramatically and unforgettably collapses time and brilliantly reveals the rickety condition of P. L. Travers’ tormented emotional state.

POV: “I was terrified of the scene, but it was one I knew we had to accomplish,” Hancock says. “It’s when the two stories combine in a way. It’s not just two stories told separately—her childhood and the tragic origin story of Mary Poppins, and her two weeks in Hollywood. This is the point where what’s happening in the room starts to influence her memories of her life. And it becomes all too much for her.”

POV: “John didn’t want this to feel as if the movie was set in a particular time frame and had a conventional set of flashbacks,” production designer Michael Corenblith says. “For John, it wasn’t about time being a linear thing, with us grounded in 1961 and flashing back to 1906. For him, it was about the experience of what was going on in P. L. Travers’ head. As opposed to being a traditional flashback film, in the world inside of her head, time has become very malleable.”

Saving Mr. Banks begins and ends with the pleasing sound of a piano playing snippets of songs based on those heard in the film Mary Poppins. The piano creaks, a foot pushes the piano pedals and we can almost hear fingers touching keys. The music isn’t presented as a finished product; it’s still being created, a solitary human being in a rehearsal room somewhere labors to find the perfect melody.

“Saving Mr. Banks is definitely a movie about the creative process,” Hancock explains. “And we don’t get the opportunity to tell those types of stories very often.” Producer Alison Owen agrees. “The film is about many things, but most of all it’s about the art of creation itself—the power of story. The film helps explain why human beings have always felt the need to order and explain their lives with story and how that human impulse will never diminish. And it does so in such a fun way—with the Sherman brothers’ songs and great characters.”

One of Saving Mr. Banks’ biggest thrills is watching Oscar-winning actor Tom Hanks’ portrayal of Walt Disney. “What I wanted to incorporate into the work was the delight Walt took in the final reality that was the park and the studio—places running at the top of expectations— and yet Walt remained as busy as an executive could be,” the actor says. “A visit to the park was, for him, a reward and still a place to dream of what could come next. Not unlike it is for all of us still.

“I listened to his voice via recordings and extensive, never- before-heard raw interviews to find the ‘Kansas City’ that remained,” he adds. “In the car, at home, on every video and CD I could find. [The late] Diane Disney Miller was so kind to see that I had two all-access days at The Walt Disney Family Museum where I heard every recording and saw every piece of video as many times as I needed to.”

Oscar-winning actress Emma Thompson describes her approach to acting and the challenging role of P. L. Travers. “I always make it my first priority to panic, then I read,” she mentions. “In fact, I read as much as I could find. I watched all the documentaries I could find. I listened to the tapes of her work with the Shermans—which took forever!—and I met with friends of hers and was granted access to their memories and archives. I lay in darkened rooms and thought. Then I tried to forget all about it. There’s only so much you can do before you have to dive off the roof without a parachute.”

In the end, Saving Mr. Banks is also a celebration of Mary Poppins, the film. By the time we see excerpts from the actual film—at the scene showing the Grauman’s Chinese Theatre premiere of Mary Poppins—they appear in a startling new light, so used have we become to their simpler, charming versions from the rehearsal room. The film is brilliantly choreographed; the animation pops from the screen; the music is utterly charming. But the audience now knows that this classic Disney film’s origins begin in Queensland, Australia, in 1906, found its way to a rehearsal room at the Disney Studios in 1961, and came to life as one man played a piano, perhaps alone, and began to peck out a melody.

CUT TO: Mary Poppins: That will be quite enough of that, thank you.