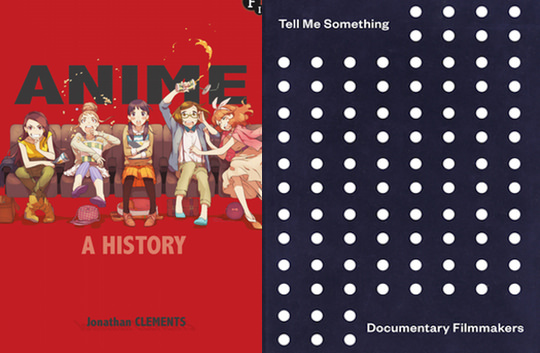 2013 was a fantastic year for film, and it also turned out to be a fantastic year for books about or by filmmakers. Memoirs, book-length interviews, biographies, histories and insightful how-to guides offer the film lovers and budding auteurs in your life inspiration, illumination and, very often, serious laughs.

Here’s a short list of some of great books on our favorite subject released in the past year. Whether you’ve got a hipster, horror lover or anime fan on your Christmas gift list, we’ve got you covered.

“The Most of Nora Ephron”

“I try to write parts for women that are as complicated and interesting as women actually are.” – Nora Ephron

Nora Ephron was a national treasure. That was clear to her many fans and admirers, and will become evident to any Ephron-newbie who picks up this posthumous collection of her work. Organized by her many occupations (all of which involved writing), this volume has it all—her novel “Heartburn,” the screenplay to When Harry Met Sally, essays, journalism, and blogging. This book is both a dream for Ephron fans and the perfect recruitment tool for those who haven’t realized what a remarkable woman she was. Also, she was terrifically, irrepressibly hilarious.

“The Friedkin Connection: A Memoir” by William Friedkin.

“Technique is of less interest than character and story.” – William Friedkin

The legendary director of The French Connection, The Exorcist, and To Live and Die in LA offers a thoughtful examination of his career, from doing live television and directing documentaries in Chicago to winning an Academy Award for Best Director for one of the greatest crime dramas of all time, The French Connection. Friedkin is unflinching in his critiques of his own mistakes, and his honesty and intelligence make this a wonderful memoir for film lovers and a fantastic guide for aspiring directors.

“The secret behind costume design is it’s not about the clothes. We are all about substance over style.” –Deborah Nadoolman Landis

Landis is an Academy Award-nominated costume designer (Coming to America), and here she shines a spotlight on her predecessors and contemporaries by looking at costume design over the past century. This gorgeous book was published in conjunction with an exhibition at the Victoria and Albert Museum in London, giving readers a visual tour of the crucial work of costume designers from the silent era to the present day.

“Paddle Your Own Canoe: One Man’s Fundamentals for Delicious Living,” by Nick Offerman.

“Despite some loose popular misconceptions, I did NOT in fact drop from my mother’s womb wielding a full moustache and a two-headed battle-axe.” – Nick Offerman

If you’re interested in learning about woodworking, grilling meat, growing a mustache, and what it’s like to be married to the hilarious Megan Mullaly, than this is the book for you. It’s also profane, funny, and, in a departure from his many similarities with his Parks and Recreation character Ron Swanson, touching.

“The world is so big, so complicated, so replete with marvels and surprises that it takes years for most people to begin to notice that it is, also, irretrievably broken. We call this period of research ‘childhood.’” – Wes Anderson

If you’re a Wes Anderson fan (and there are legions of them), you'll have hit the jackpot with Zoller Seitz’s fantastic book. Structured as a book-length conversation between one of the best critics working today and Anderson, the book is a thoughtful analysis of film as well as a visual treasure trove. Like an Anderson film, "Collection" is loaded with charming, beguiling and often very beautiful ephemera. The book includes glorious illustrations by Max Dalton and expert analysis from designer Martin Venzky on Anderson’s signature style.

“Still Foolin’ Em: Where I’ve Been, Where I’m Going, and Where the Hell are My Keys?” by Billy Crystal.

“My anxiety got worse and worse. Then Janice got pregnant. I have to admit, I was kind of shocked when she told me. It happened so fast. The Crescent should be this fertile.” – Billy Crystal

For all of his successes, Crystal’s memoir details the many missed opportunities and failures he experienced, and does so with genuine warmth, humor, and honesty. It should come as no surprise that the book is witty and charming, the perfect read for anyone who came of age when Crystal was performing on Saturday Night Live, meeting Sally, or venturing into the west as a City Slicker.

“There’s something scary about something small not being afraid of you.” –Guillermo Del Toro at the FilmDistric panel, discussing Don’t Be Afraid.

Sort of a dark sibling to “The Wes Anderson Collection,” Del Toro’s “Cabinet of Curiosities” lives up to its title and then some. Yet this is not just some wild collection of the incredibly creative auteur’s nightmarish visions—it’s is also a very intimate look at his interior life, including his personal notebooks. Macabre, lavish and always interesting, this is a book for anyone who saw and loved Pan’s Labyrinth (arguably the greatest of Del Toro’s films), “Cabinet of Curiosities” will offer you proof that he’s one of the most innovative and creative directors working today.

“A Story Lately Told: Coming of Age in Ireland, London and New York,” by Anjelica Huston.

“He divorced Black in 1946, when he was forty years old, and made Evelyn Keyes, the actress who played the sister of Scarlett O’Hara in Gone With the Wind, his third wife, on a spur-of-the-moment trip to Las Vegas after a vodka-fueled dinner at Romanoff’s.” – Anjelica Huston about her larger-than-life father, the director John Huston.

The first in a planned two-volume memoir, Huston plunges into her formative years in Ireland and London, where she lived in awe (and terror) of her famous, powerful father. Huston was the daughter of the legendary director’s fourth wife, and spent her childhood on a remote estate in Ireland where house guests included Peter O’Toole, John Steinbeck and Marlon Brando. She eventually moved to London, where her equally enthralling mother, Enrica Soma, a prima-ballerina, was alive only long enough to see Huston find her footing first as a model and later an actress.

“Tell Me Something: Advice From Documentary Filmmakers,” edited by Jessica Edwards.

“Learn from your mistakes – write them all down and torment yourself with them. Look at beautiful paintings. Listen to gorgeous music. Study black and white photographs. Drink alcohol – but never get drunk. Smoke weed – but never get stoned. Have sex whenever the opportunity arises. Only work with smart people. Finally: An ambitious failure is preferable to a mediocre success.” –James Marsh (Man on Wire, Project Nim)

Edited by filmmaker Jessica Edwards, “Tell me Something” is a compendium of great advice from some of the world’s finest documentary filmmakers. Errol Morris, Michael Moore, Alex Gibney, Annie Sundberg, Lucy Walker and Martin Scorsese are a few of the documentarians that gave Edwards some hard-won wisdom. The book is also a gorgeous photo gallery—each filmmaker sat for an original portrait taken by an esteemed photographer.

“Anime: A history,” by Jonathan Clements.

“This is not a book about, say, gender roles in 'Star of the Giants' or manifest camp in 'Neon Genesis Evangelion.' This is a book concerned with about how 'Star of the Giants,' 'Evangelion' and a number of other anime fit within a continuum of a century’s film-making, how they came to be, who the makers thought were watching, and how they transformed the nature of subsequent productions.” –Jonathan Clements.

If you have an anime fan in your family or group of friends, Clement’s comprehensive history of Japanese animation will do the trick. Drawing on testimony from anime professionals, Clements unravels the intriguing, beguiling world of this very popular art form, going behind the scenes of global successes like Hayao Miyazaki’s glorious Spirited Away.

Featured image: The cover of "Anime: A History" by Jonathan Clements and "Tell Me Something: Advice From Documentary Filmmakers," courtesy British Film Institute & Film First.