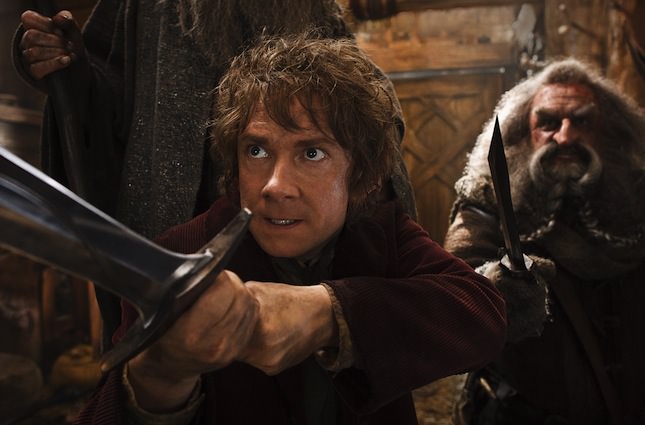 Explaining the Characters of The Hobbit: The Desolation of Smaug via Photos

With the release of The Hobbit: The Desolation of Smaug coming December 13, we thought a good way of reacquainting you with some of the characters (and introducing you to some new ones) would be through visual identification.

A quick recap of where we left off as you reenter Middle-Earth. The Hobbit: The Desolation of Smaug is set some 60 years before The Lord of the Rings. Director Peter Jackson split the narrative of “The Hobbit” into three films—when we last left Bilbo Baggins (Martin Freeman) at the end of The Hobbit: An Unexpected Journey, he, Gandalf and their band of thirteen Dwarves, led by Thorin Oakenshield (Richard Armitage), were on their way to attempt to reclaim the Lonely Mountain from the titular dragon Smaug (voiced by the omni-present Benedict Cumberbatch). They have just survived a battle with the lunatic Orc war-chief Azog (thanks to being rescued by the aforementioned giant eagles) and are taken to the Carrock (a huge rock outcropping). There, in the distance, they can see the final destination of their quest—The Lonely Mountain. This is where the lost Dwarf Kingdom of Erebor was located before Smaug decimated the kingdom and took the mountain, and its riches, for his own.

So let’s take a look at a some of these characters in an attempt to better understand just exactly who they are and what’s going on in Middle-earth. We'll start with the obvious characters and work our way into some of the newer faces we'll be seeing. 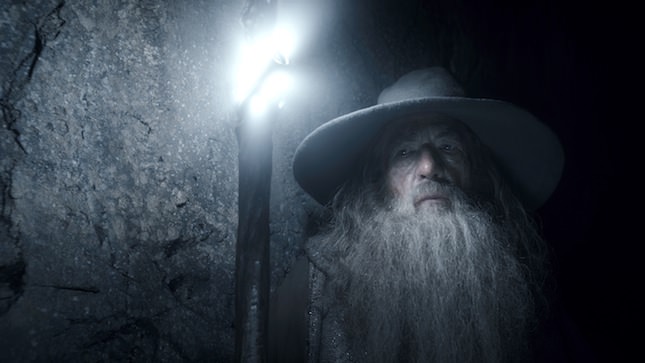 Ian McKellen is a legendary actor and has done a thousand incredible things on the stage and screen. Yet he has so wholly inhabited the role of Gandalf it's near impossible to think of any other actor playing the mischievous wizard, and he will probably be remembered first and foremost for this role. Gandalf is perhaps the most essential character in the entire Hobbit/Rings universe who's not Bilbo or Frodo. Without Gandalf, the company looking to destroy the ring in the LOTR trilogy wouldn't have made it (on several occasions), and the same could be said again for Gandalf's role in Bilbo and his band of dwarves' quest. It was Gandalf who killed the Great Goblin in the previous Hobbit, allowing the company to escape, and he's back again guiding Biblo and crew to the Lonely Mountain and their ultimate face off with Smaug. 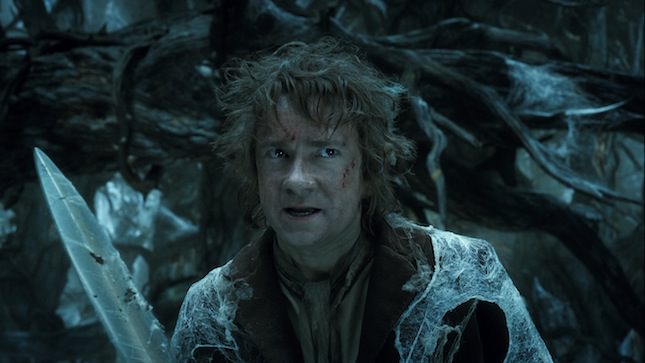 What was Gandalf's logic in incorporating Bilbo Baggins, a peaceable, pipe smoking Hobbit, into this entire ordeal in the first place? Gandalf and the dwarves mission is, save the whole 'having to fight a gigantic dragon' part, essentially a heist. They want to reclaim Lonely Mountain from Smaug, and will need to be stealthy in order to do it. Thanks to Biblo's diminutive size, and the Hobbit race's ability to move about on their large padded feet quietly, Gandalf felt Bilbo would be the perfect 'burglar,' able to help the company sneak about amongst hostile lands. Gandalf undoubtedly saw more in Bilbo than just stealth—the Hobbit ends up showcasing quite a bit of courage throughout his ordeal.

In many ways, The Hobbit trilogy that Jackson is crafting is driven as much by Thorin Oakenshield's gloomy desperation to reclaim his lost kingdom as it is by Bilbo or Gandalf. He is the undisputed leader of the 12 dwarves in his company, and whereas his band can be raucous and fun-loving, Oakenshield's got the personality of his last name. His desire to destroy Smaug and reclaim Erebor is almost as single-minded as Gollum's need for his precious. Thorin has both trust and insecurity issues—his need to avenge his family and his people's destruction has led him to feel he can count on few of his allies, and Gandalf's leadership challenges his own. And as for the elves, whom Thorin remembers seeing as a boy watching his kingdom burn, he could sheath his sword in the chip on his shoulder. 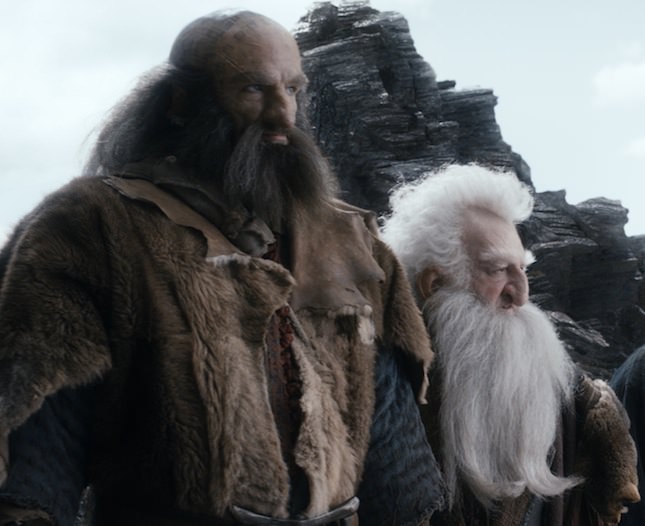 Dwalin and Balin are brothers, the brawn and brains in Thorin's operation. Dwalin is recognizable as the tallest of the dwarves, and is probably Thorin's fiercest ally on the battlefield. Like Thorin, he is distrustful of anyone who hasn't earned his respect (especially elves) and was involved in the famous battle with the Orc war-chief Azog, who figures prominently in both of these Hobbit films. Balin acts as an advisor to Thorin, as the oldest members of the company (save Gandalf), he's counted on for his wisdom. Unlike most of the warlike dwarves, Balin's gentle, and has done battle in his life due to circumstance rather than zeal. Balin, like Bilbo during the first Hobbit's outset, harbors deep concerns about their quest. 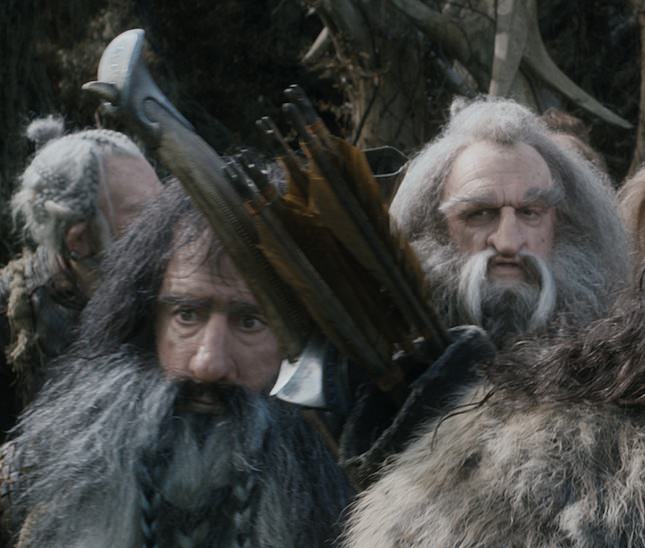 Good old grunting, grumbling Bifur carries around the ultimate battle scar—a piece of Orc axe still embedded in his skull. This explains why Bifur doesn't speak a ton in these films (unfortunately the axe-wound isn't visible in the above photo thanks to Thorin's quiver). As for Oin, he's got a lot riding on this quest, namely, his own money, but he's a valiant warrior (and brother of Gloin), and also the company's healer—he applies his special herbal ointments to his comrades' wounds. Now you know where 'ointment' gets it's name. 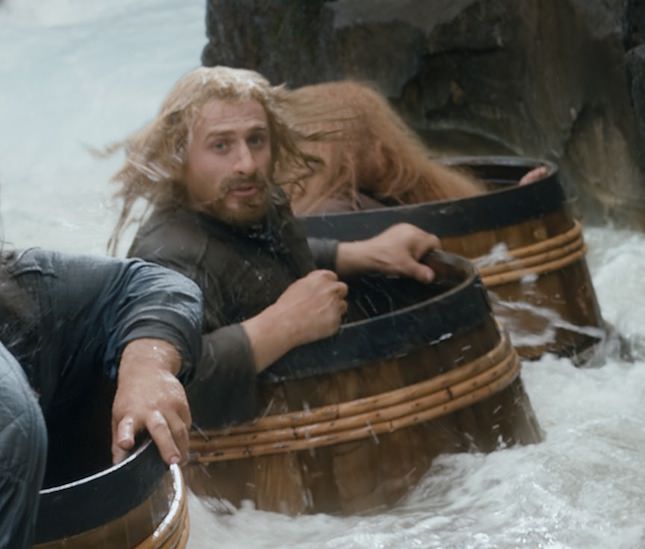 Fili (along with his brother Kili) is the youngest of the 13 dwarves, and Thorin's nephew. He's also blissfully unaware (at least at the outset of the first Hobbit) of the amount of danger he's in. A skilled fighter, Fili's brave and ready to fight, but unlike his uncle, he's never seen the dwarf kingdom of Erebor. Fili and Kili, being the youngest and most nimble of the dwarves, often serve as scouts. 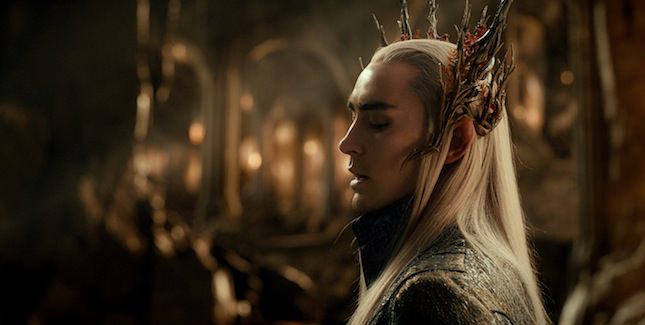 Thranduil has become a fan favorite, but he's certainly no favorite of Thorin's. Refusing to lead his elven army to their deaths when Smaug obliterated Erebor, Thranduil instilled a hatred of all elves in our dwarf leader. Thranduil is Legolas's father (remember him?), and leads the film's newest elf, Tauriel. Thranduil, Legolas and Tauriel speak two Elvish languages during the film, the conversational Sindarin, and the formal Quenyan—Tolkien scholar David Salo helped the actors learn these impressively detailed tongues.

It's nigh on impossible to think of a better actress to cast as an elf warrior than Evangeline Lilly. She kicked major butt in Lost, and Tolkien's world could use some more powerful women who engage in the many battles he wrote about. Tauriel is the captain of Thranduil's Silvan Guard, she grew up defending the borders of the Woodland Realm, and is a departure from the elves we got to know in the LOTR trilogy (at least the female elves, in the form of Cate Blanchett's powerful, but removed, Galadriel). Lilly worked with movement choreographer Terry Notary to achieve the agile, graceful gait of the elven race. She also trained extensively in martial arts. Deadly proficient with daggers and her bow and arrow, Tauriel is both a fighting force and, you will soon see, a love interest for one of the most beloved characters in the Tolkien universe. 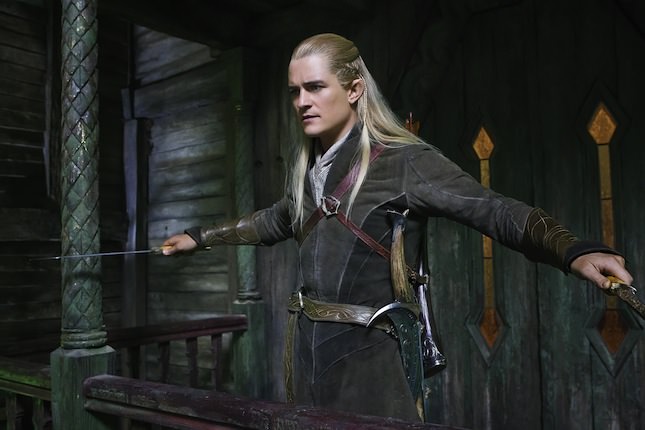 He's baaaaaaack. Although Legolas, like Tauriel, wasn't in Tolkien's "The Hobbit," Jackson put him in this film to help slay some Orcs and, potentially, Tauriel's heart. Legolas will meet the dwarf Gloin on this journey, the father of his future friend and Fellowship mate, Gimli. You can be sure that Legolas will get plenty of moments to utilize his bow and arrow—stunt coordinator Glenn Boswell said in the film's production notes that Legolas and Tauriel, who often fight side-by-side, have very different fighting styles, which creates a beautiful visual in those hectic moments. Elves are immortal and don't age, by the way, in case you were wondering, or forgot, how they're able to look exactly the same over huge swaths of time. 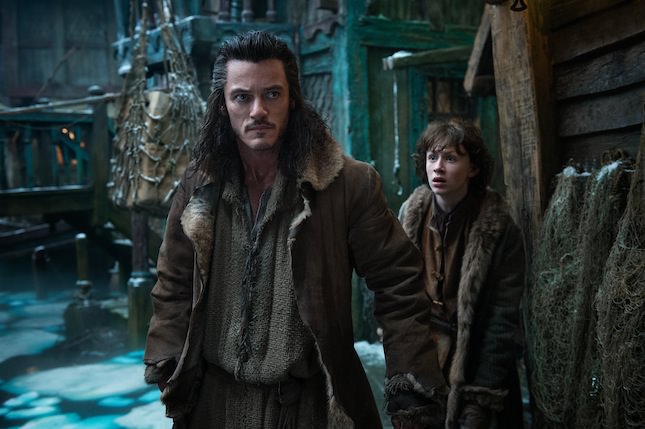 A barge man from the city Lake-Town, Bard comes into the story at a low moment for the company and proves a useful (if enigmatic) character. One of the through-lines of the entire Tolkien Middle-earth saga is distrust—characters are leery of each other and self-protective, sometimes to a fault. Bard has three children to protect and care for, and when he comes upon the Bilbo and the gang his first instinct is to draw his weapon. Bard's ancestry was ravaged by Smaug just as Thorin's was, and he proves to be a courageous and capable warrior. Bain is one of his three children (he also has two daughters, Sigrid and Tilda), who, despite his youth, is ready to fight alongside his father. The actor John Bell grew four inches during the course of the production—the costume team had to devise clever schemes to keep this from being noticeable, and distracting, in the film. 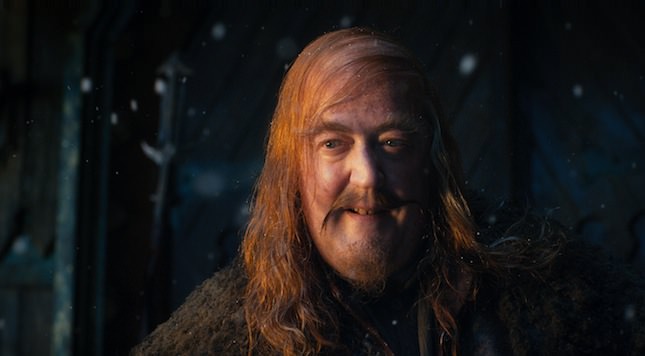 Running Lake-town a little like Boss Tweed ran New York City, the Master eats and drinks well while the people starve. He is the dark light of Lake-town, the anti-Bard, hoarding riches and food and keeping his people at the edge of starvation to keep them from revolting. That's not to say the Master isn't without his charms—he is played by Stephen Fry, after all. He's an intelligent and charismatic character, one who happens to be unscrupulous and greedy.

A very unpleasant individual, this Azog the Defiler. He has a severe case of bloodlust for Thorin, who relieved Azog of his left arm during a vicious battle between ages ago. Azog has a son, Bolg (it's best not to think about how Orcs procreate), who, would you believe it, is also psychopathic and nasty. Jackson and his team used the same performance capture techniques that made Gollum so incredible for Azog and Bolg. Actors Manu Bennett and Lawrence Makoare played the two Orc warriors, respectively, and performed their roles on a performance capture stage.

For the rest of this wild world of characters, you'll have to go see the film. Hopefully you'll go in with a little more understanding now of who's who, and what's going on.

Featured image: Martin Freeman as Bilbo and John Callen as Oin in The Hobbit: The Desolation of Smaug. Courtesy Warner Bros. Pictures.