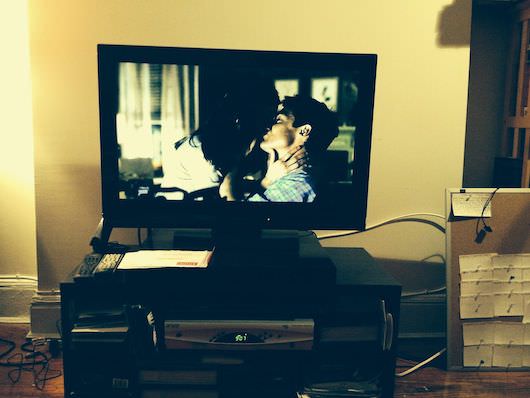 Thanksgiving is a great holiday for bingeing—not just on food but also on films. As we did last year, we’re providing you with a Thanksgiving Movie Survival Guide.

So loosen that belt (or your sweatpants band) and enjoy all the cinematic bounty on offer. The Thanksgiving holiday is a major cinematic feast.

It’s transit day for many of us, but for those lucky enough to already be wherever they plan to spend Thanksgiving, there’s plenty to watch. At 9:00 you have Jerry Maguire on E!, while Good Will Hunting comes on at 9:55 on Encore.  If you’re into early Paul Thomas Anderson (you should be), why not catch Punch-Drunk Love at 10:30 on FX. For Twilight fans, Breaking Dawn – Part 1 is also on at 10:30 on Showtime 2. Amanda Bynes searching for her father, Colin Firth? Yup, it’s What a Girl Wants at 11:32 on MTV.  We’re not done! Before he nailed his serious role in Alexander Payne’s wonderful Nebraska, Will Forte was MacGruber, which you can catch on Comedy Central at 11:49.

Everybody pretty much agrees that watching Miracle is the best, so here’s your chance, at 12:05 on Encore. Over on HBO2 you can take a long walk with Bilbo Baggins and friends in The Hobbit: An Unexpected Journey at 1:25. If you’re looking for some history, Red Tails, the story of the African-American Tuskegee Airmen who flew at the height of WWII, plays at 1:45 on Cinemax. At 2:30 you get to choose between farce and force, as Austin Powers: The Spy Who Shagged Me appears on FX while Mike Tyson: Undisputed Truth, a one-man show directed by Spike Lee, airs on HBO. At 4:00 on Cinemax, the most rare of genres, the zombie-romantic comedy Warm Bodies, shuffles onto TV. At 4:30 over on Disney XD  The Incredibles is playing, one of the best animated films of all time. At 4:35 The Princess Bride will renew your faith in humanity (and the brilliance of Mandy Patinkin and Robin Wright) on Encore.

Catch Johnny Depp on HBO at 6:00 as he stars in Dark Shadows as Barnabas Collins, who returns to his mansion after being entombed for 200 years. The Hallmark Channel will be showing Christmas Magic at 6:00 as well. Cinemax will be showing Ang Lee’s visually stunning Life of Pi at 8:45, while the swords and sorcery are available on BBC America with Highlander playing at 9:00. Reese Witherspoon goes to Washington D.C. in Legally Blonde 2: Red, White & Blonde at 9:45 on Flix. At 10:33 Green Lantern plays on FX, while night owls can revisit a fantastic actor we lost far too soon when A Knight’s Tale, starring Heath Ledger, airs at 12:45am on Encore.

It might not be a movie, but who doesn't start with the Macy’s Thanksgiving Day Parade starts at 9:00 on NBC. Meanwhile The Disney Channel will be playing Toy Story 3 at 9:00 as well. You can pile the kids in front of The Cartoon Network’s showing of Tom and Jerry & The Wizard of Oz at 10:00. If you need a good heaping helping of time to kill, we’ve got two long films, one of which is not only a classic but a Thanksgiving staple. We’re talking about The Godfather, which starts at 11:30 on AMC (part of their mini Godfather marathon). Or you can take in Tom Hooper’s epic 2012 version of Les Misérables, playing at 11:45 on Cinemax.

Encore will be showing 2012’s The Amazing Spider-Man at 12:50, ABC Family will be showing Harry Potter and the Prisoner of Azkaban at 1:00. At 1:13pm Comedy Central shows 1993’s Coneheads.  Something’s Gotta Give for aging lothario Jack Nicholson (spoiler alert: it’s Diane Keaton), at 2:00 on Bravo. Back on AMC at 3:30 is The Godfather, Part II, continuing the marathon. Speaking of marathons, ABC Family continues theirs at 4:00 with Harry Potter and the Goblet of Fire.  At 5:30 X-Men Origins: Wolverine is being shown on Fox Movie Channel.

Before he took a turn into more serious fare, Matthew McConaughey was the go-to romantic comedy lead, as he is here in How to Lose a Guy in 10 Days, airing on Bravo at 6:30. At 7:20 The Campaign gets underway on Cinemax, or you can head back over to ABC Family to continue your boy wizard binge with Harry Potter and the Half-Blood Prince. At 9:00 on E! you can see the man behind the noseless Voldermort become the dapper politician in love with a chambermaid when Ralph Fiennes and Jennifer Lopez get together for Maid in Manhattan. Then it’s the critically acclaimed third installment of the Men in Black 3 plays on Encore at 9:40. The night owl looking to reconnect with his or her childhood can watch A Boy Named Charlie Brown on ABC Family, while those looking to cry themselves to sleep can watch The Wrestler on IFC at 12:30am.

You can’t do much better than a dose of Vertigo with your coffee on AMC at 9:00. Of course if that’s too heavy for you first thing in the morning, there’s always Beavis and Butt-head Do America on Comedy Central at 9:14. Or take in Joe Wright’s luscious take on Anna Karenina, starring Keira Knightley as the doomed Anna, at 9:20 on Cinemax. Christopher Nolan’s Batman Begins swoops down at 11:00 on Spike. Take a road trip with the crew in Little Miss Sunshine on Bravo at 11:30, or ride some giants by watching the surfing saga Chasing Mavericks also at 11:30 on HBO.

Disney XD will be playing Toy Story 2 at 12:46 while two classics begin at 1:00—Dave on OWN, and Cocktail on Showtime. Comedy Central will be giving us a dose of the beloved, late Chris Farley with Black Sheep playing at 1:19. There’s a chance to watch Adam Sandler do his man-child thing in Billy Madison on IFC at 3:15, or catch the final installment in Nolan’s Batman triology with The Dark Knight Rises at 3:30 on HBO. Also on at 3:30 is The Shawshank Redemption on OWN. On Cinemax blast off with the crew of the Prometheus at 4:00 and watch one of the most intense scenes of any 2012 film (you’ll know it when you see it).

At 8:00 you can watch 2 Fast 2 Furious on Bravo, see Mark Wahlberg deal with Contraband on Cinemax, hang with the ladies of Charlie’s Angels: Full Throttle on Encore, or learn how Billy Beane changed baseball, played by Brad Pitt, in Moneyball on Fox Movie Channel. Emma Stone goes for the Easy A at 9:00 on FX, the RZA plays a blacksmith in rural China who makes himself into a living weapon in The Man With the Iron Fists on HBO 2 at 9:00 as well. You can Walk the Line at 11:00 over on Oxygen, while John Singleton’s classic Boyz N the Hood at 12:00am.