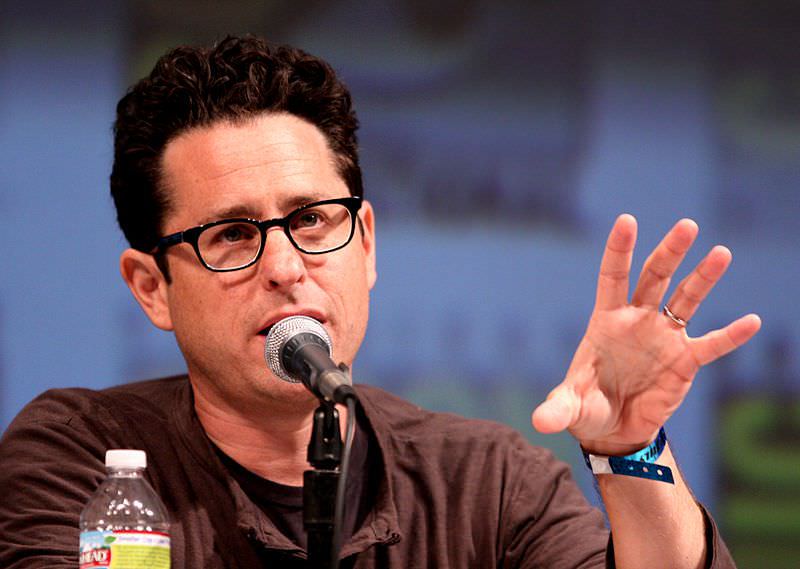 As useful as IMDBpro is, it’s recommendable to take the “projects in development” rubric with at least a grain or two of salt. Because really, how could one man have 28 projects in development, including the next Star Trek and Mission Impossible, while also working on a little film franchise called Star Wars?

If it were any one other than J.J. Abrams, you’d be right to assume that most of these would fall through, or that his involvement with many of them would be cursory at most. Plus, there are few titles that have more definitions than ‘producer,’ which is how he’s listed on all but two of those in development projects (he’s listed as a producer and writer on Untitled J.J. Abrams/Billy Ray Project, and producer/director on The Stops Along the Way, a TV mini-series, and has ‘executive’ in front of his title on two others).

Also, as you might have heard, he recently collaborated on the novel/meta-narrative “S.” with Doug Dorst, a book that doubles as a piece of art, is made up of four interconnected narratives, comes with a companion teaser, and is layered with more references, asides, footnotes and stories-within-stories than whatever the offspring of Lost and Alias might produce, were it to be raised by Super 8 and Cloverfield. With access to a time machine.

As prolific and successful as Abrams is, it really seems like there’s just that one project that feels a little more intense than the rest. He’s already succeeded at rebooting Star Trek, and there’s far less to lose should any one of his more than two dozen projects fall through or fail outright then there is in taking over for George Lucas as the central figure to lead the next generation of the Star Wars universe.

And that universe includes a growing list of incredible filmmakers who are all there to help Abrams bring the next generation of Star Wars films to life.

Let’s take a look at what we know, what we think we know, and who's involved in arguably the most highly anticipated film of the new decade.

It takes a hell of a lot of chutzpah to take on the most obsessed over film franchise in history. Anyone who thought it was just be smooth sailing once Abrams was named director, under Kathleen Kennedy’s production, isn't an avid fan of filmmaking.

The bumps in the road this far are not all that disturbing for a film of this magnitude. Oscar winning screenwriter Michael Arndt, who had written a 40-50 page treatment of Episode VII before LucasFilm was even bought by Disney, was eventually replaced by Abrams and Star Wars veteran Lawrence Kasdan, who wrote the script for The Empire Strikes Back, arguably the greatest of all the Star Wars films to date, as well The Return of the Jedi. Arndt had been working exclusively on Episode VII for the better part of 2013, but a screenwriter of his pedigree (Little Miss Sunshine, Toy Story 3, The Hunger Games: Catching Fire) will move on to countless other projects.

Next came news that Disney was very keen on keeping Abrams, Kennedy and the team on track for a 2015 release, while Kennedy had reportedly asked for an extension to 2016. Word as of now is Episode VII is still expected to be released in 2015.

What we know for sure, which is scant, is that the fact that the title Episode VII tells us this is a continuation of the saga, picking up after The Return of the Jedi. It’s unclear whether Abrams and Kasdan will retain any of Arndt’s work, or start fresh, but what is known is that Lucas himself had envisioned a nine film arc for the entire saga, while Dale Pollock, Lucas’ biographer, has said that he actually had 12 films in mind. With rumors that Harrison Ford, Mark Hamill and Carrie Fischer are all going to be in the film, the story might be set 30 + years into the future to match their original ages, focusing the  new trilogy on the next generation of Skywalker children.

When Disney chief Robert Iger was preparing to buy LucasFilms, he made a savvy business decision—he watched all six Star Wars films. According to Business Week, Iger wanted to not only reacquaint himself with Lucas’s world, but find out how much was story was left to tell.

“As it turned out, Lucas had already done the cataloging,” Devin Leonard of Business Week writes, “His company maintained a database called the Holocron, named after a crystal cube powered by the Force. The real-world Holocron lists 17,000 characters in the Star Wars universe inhabiting several thousand planets over a span of more than 20,000 years.”

As part of the deal for buying LucasFilms, Lucas’s treatments for the next three Star Wars films had to be included. Lucas reluctantly handed them over, with the caveat that only Iger, Alan Horn and Kevin Mayer, Disney’s executive vice president for corporate strategy, could read them.

Lucas eventually joined in on story meetings, acting as the institutional memory of the Star Wars universe, explaining what was possible, what wasn’t, and what each character could and couldn’t do.

Costume designer Michael Kaplan, who’s worked with Abrams on both his Star Trek films, told Clothes On Film he’s on board for Episode VII. Clearly no stranger to modern epics, Kaplan also has another, earlier legendary sci-fi film on his CV—Blade Runner. Kaplan’s career includes some of the most stylishly costumed major films of the past twenty years, including Se7en, The Game, Matchstick Men, I Am Legend, Star Trek & Star Trek Into Darkness, and Mission Impossible: Ghost Protocol.

Simon Kinberg (writer): Kinberg has penned Mr. and Mrs. Smith, Sherlock Holmes, and the upcoming X Men: Days of Future Past. His involvement in Episode VII is currently listed as ‘creative consultant.’ Kinberg's role seems a fluid one—he may have a hand in several of the upcoming Star Wars films, including the much discussed spinoffs that could focus on Yoda, Han Solo, or, as so many fans hope, Boba Fett.

Maryann Brandon & Mary Jo Markey (editors): Brandon and Markey worked with Abrams on Mission: Impossible III, Star Trek, Super 8, and Star Trek Into Darkness. They were interviewed by StudioDaily when Into Darkness was coming out, and they had this to say about taking on a project with so much cultural significance: Markey: “A lot of what we do grows out of the material we’re given, from the themes and character arcs—the underlying meaning of scenes and the film as a whole. I never try to impose a style.” Brandon said, “Star Wars is a very different film than Star Trek…it’s a much more straightforward coming of age story.” Abrams, like most filmmakers, is surrounding himself with filmmakers who he knows and trusts. It's a smart way to tackle a project of this size and scope.

John Williams (Score): It wouldn’t quite be Star Wars without the man who was behind the score for the previous six films. Williams is obviously a legend and a Star Wars staple, but considering Abrams collaboration with equally gifted composer Michael Giacchino, there were people who were wondering if Abrams would go with his Lost connection.  But Williams is back and it was probably never in doubt. This is the man, after all, who gave us, among other deathless scores, The Imperial March, the staple of high school football marching bands all over the country trying to intimidate their opponents.

Ben Burtt (sound designer): Burtt’s career as a sound designer is almost absurdly packed with gigantic films. You could argue that a crowning achievement was the original Invasion of the Body Snatchers, where the key signal that the person you once knew has been, shall we say ‘co-opted,’ was the horrific cry they let out. But Burtt was a special dialogue and sound effects man on the original Star Wars, and went from there to work on just about every Lucas project after, from American Graffiti to the next five Star Wars. Count Wall-E, both Abrams’ Star Trek films and Speilberg’s Lincoln on his list of achievements. Sound designers are often brought in during the planning stages of a film—their contributions are interwoven with the script, sometimes with modifications made on the story itself to match their creations. If you want to know how important a sound designer is, imagine the lightsaber making any other sound than the one Burtt created. In a beautiful bit of kismet, Burtt found the indelible lightsaber sound by recording the hum of idling interlock motors in old movie projects and the interference caused by a TV set on a shieldless microphone. He had been a projectionist while in film school.

Mindel was the first assistant camera on Thelma & Louise, and from there he went on to become the cinematographer on films such as G.I. Jane, Spy Game, The Bourne Identity, Mission: Impossible III, Star Trek and Star Trek Into Darkness, and the upcoming The Amazing Spider-Man 2. Mindel’s already told outlets that he’ll be shooting Episode VII on 35mm film instead of digitally. Yet there are rumors that Star Wars will be shot partially, like Star Trek Into Darkness and The Dark Knight Rises before it, on IMAX cameras. IMAX chief executive officer Richard Gelfond told The Hollywood Reporter that he’d been talking to Abrams about that very possibility.

Rick Carter & Darren Gilford (production designers) There are few jobs more important than a production designer. Responsible for the overall look and feel of a film, the production designer works with the director to ensure the world being created is consistent and as evocative from a design perspective as it is from a character and narrative perspective. Rick Carter’s had an incredible career, and a really fantastic recent run—he was nominated for an Academy Award in Art Direction in 2010 for Avatar (he won), in 2012 for War Horse, and for production design in 2013 for Lincoln (he won again). He’s not only got Episode VII on his plate, he’s also re-teaming with Spielberg for Jurassic World. Meanwhile, Gilford comes to the project at the ripe age of 31, having started out as a managing art director on the short film T2 3-D: Battle Across Time, and working his way from concept illustrator on Inspector Gadget to illustrator on Ocean’s Thirteen, eventually to production designer, on both Tron: Legacy and Oblivion.

Chris Corbould (Special Effects Supervisor): He could reasonably introduce himself as Corbould, Chris Corbould for how many Bond films he’s worked on (11, including the most recent Skyfall). He took home an Academy Award for his visual effects work on Inception. The special effects in Episode VII will no doubt require Corbould to dip deep into his bag of tricks, as the bar for the 'wow factor' has risen exponentially since  Revenge of the Sith, and Star Wars fans are, if you haven't notice, something of a fickle bunch.