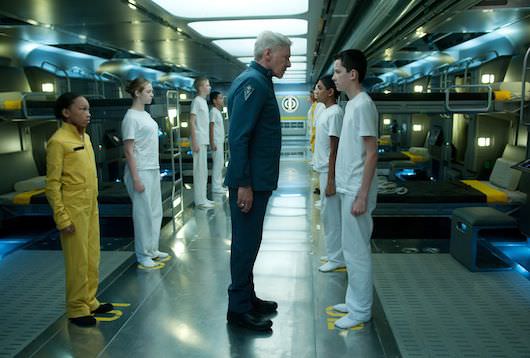 Ender’s Game and 8 Films That Touch on Bullying

Looked at in a certain way, Ender’s Game follows The Hunger Games into theaters (even though the story itself predates it) as a film about the pernicious reality of bullying, and, the myriad ways one can stand up to it.

In each film, some form of tyranny is meted out, both from up close and personal and from afar. There are antagonists who tease, torment and threaten our protagonists, and there are the governments that manipulate and menace the populace. In the case of The Hunger Games, it’s the Government of Panem that forces chosen children into mortal combat with one another. In Ender’s Game, it’s a panicky Earthling government that sends chosen children into orbit to attend Battle School.

When Ender’s Game begins, the human race has already fought off an alien invasion by the insect-like Formics, a near catastrophe that has spooked the world so much that they’ve been preparing for the next inevitable showdown ever since. In order to train future battle commanders (and find their savior), they set up the aforementioned Battle School in space, sending the most promising recruits, all of them children, into a program that makes George Orwell’s experience in prep school seem charming by comparison. Ender Wiggin (Asa Butterfield) appears to be the one they were looking for, but in order to make sure, his superiors manipulate his environment, creating obstacles to surmount as well as getting other children, who weren’t too fond of the outcast to begin with, to mercilessly bully him.

Ender’s Game puts its hero through a series of nearly intolerably intense scenarios as his training threatens to snuff the boy right out of him, turning him into a man, a fighting machine. The lessons to be gleaned from the film include empathy, tolerance, and most clearly, resilience. Ender has to learn how to not only push through adversity, but also to abandon victimhood entirely. Ender’s Game might look like a sci-fi blockbuster spectacle, which of course it is, but it also retains the complexity and richness of the source material (even if it was written by someone who could heed his own advice on empathy).

The list of movies that touch upon bullying is so extensive you begin to realize that a huge percentage of films, in one way or another, are about this scourge in some capacity. This is largely due to the fact that one of the most fundamental elements of storytelling is the attempt of a protagonist to find a balance in their lives after things have been thrown out of whack. An inciting incident at the end of Act I upends their lives—they struggle through Acts II and III to correct this imbalance, to find a measure of peace or stability.

And is there a more unbalanced time period, emotionally and mentally, than adolescence? Especially when one feels alone, abused, on the outside looking in. This is, of course, in no way a comprehensive look at films that touch upon bullying. That would require a book. This is merely a glance at the many examples of films that deal with the trauma of childhood tyranny—an experience almost everyone has had at one point or another in their lives.

1976 saw the release of Brian DePalma’s adaptation of Stephen King’s Carrie. Telekinesis and a sadistic mother aside, Carrie touched a nerve for many viewers, especially young females. Carrie’s struggles to fit in, and her hideous experiences at school, like the shower scene in which she mistakes her first menstrual cycle for impending death and is mocked for it, were especially horrific. Inside this supernatural horror film were recognizably human experiences. There's a reason Carrie's been remade twice (most recently by director Kimberly Peirce, who factors onto this list later) and turned into a musical.

The original The Karate Kid, released in 1984, was a particularly affecting look at the horror of high school for many (especially for new kids). Daniel LaRusso moves with his mother from New Jersey to Los Angeles, where his budding friendship with a cheerleader leads to his relentless torment by her boyfriend and his friends. It seemed as if almost every single kid who grew up in the 80s saw this film, and the scenes in which the sociopathic Johnny Lawrence and his Cobra Kai minions torment Daniel hit home for any kid who dealt with a Lawrence-like bastard at school. A stranger in a strange land, Daniel’s woe was so believable that his inevitable Crane Kick of righteous justice felt like a landmark cinematic moment for many audience members of a certain age. I'm pretty sure I leapt out of my seat and pumped my little fist.

A year later came Weird Science, which I mention simply because Chet (Bill Paxton) remains one of the funnier bullies in film. And, his comeuppance was doubly sweet—you had the gorgeous Kelly LeBrock, as our bullied protagonists Wyatt and Gary's dream girl incarnate, preferring our geeky heroes over the beer guzzling schmo of an older brother. And second, you had her turning Chet into a toad-like monstrosity with a flatulence problem.

Also in 1985, we got a look at bullying through a generational lens in Back to the Future. Poor George McFly’s entire, denuded life is a result of his not standing up to his tormentor, Biff, back in high school in 1955. It takes his son Marty, a DeLorean DMC-12, a flux capacitor and some high grade Libyan plutonium to rectify this scenario. This sci-fi comedy, like Ender’s Game sci-fi drama, slyly reminds us that we need not play the victim, no matter how scary standing up for ourselves might be.

Bracing Dramas in the 90s

And now, admittedly in a bit of a lurch, we segue from the supernatural and comedic look at bullying in the 1970s and 80s to two dramatic films in the 90s, including a heartbreaking story that managed to be both an incredible feat of filmmaking craftsmanship and an unflinching portrayals of what ignorance, intolerance and there resultant cruelty will create.

Todd Solondz’s Welcome to the Dollhouse, released in 1995, was certainly not a feel good film. Focused on eleven year old Dawn Wiener, Solondz takes us on a journey fueled by Dawn’s horrible middle school life, where's she ridiculed by classmates, demeaned by teachers and threatened by a particularly confused bully named Brandon. The stress leads Dawn to a string of increasingly poor decisions that upend her entire life, pulling her family members into her sad orbit. Dollhouse, like Carrie before it, gives us both the bullies at school and the bully at home, in both cases a monster of a mother.

Kimberly Peirce’s 1999 film Boys Don’t Cry is about a lot more than just bullying, but we would feel remiss not to mention it. Based on the true story of Brandon Teena, a trans man who was beaten, raped and murdered by a group of males after they discover he’s anatomically female, Peirce's film was a richly layered, tragic story of ill-fated love, a search for freedom of identity, and one ultimately, almost impossibly, about hope. Hilary Swank’s performance as Teena was as remarkable as Peirce’s decision to focus the film not just on Brandon’s tragic last days, but to look at his relationship with his girlfriend, Lana Tisdel, and his proactive struggle to be himself. The film is a reminder of what happens when ignorance and intolerance go unchecked, but it is not mired in the darkness of the human soul. Instead, Peirce centered her film on a character you can't help but identify with—who doesn't long to be seen as they truly are, and accepted as such? Who doesn't dream of a life where they're loved because of, not despite of, their own unique persona? One of film's greatest gifts, when a filmmaker strives to make something lasting, is its ability to introduce people the audience would likely never meet, exposing these characters for what they are, human, inevitably more like us than they are different. If a film like Boys Don't Cry opens even one mind, it's worth every penny and every argument made against its existence. Peirce’s film succeeded on this level, many times over.

Catherine Hardwicke co-wrote her film Thirteen with Nikki Reed, a semi-autobiographical story that was inspired by Reed’s own life. Evan Rachel Wood plays Tracy Freeland, based on Reed, who is made fun of at school for her clothes. It’s striking how often bullying takes the form of materialistic putdowns—your clothes are ugly, your shoes have holes in them, clearly you’re poor—and how crushing that is for anybody, let alone a child. Tracy ends up stealing a woman’s purse in order to buy herself something, anything, fashionable. When the coolest girl in school (and the biggest bully) is impressed by her theft, a dangerous friendship begins between the two, ultimately unraveling Tracy's life in her desperate desire to be accepted.

Of course there are important documentaries that deal with bullying, such as Lee Hirsch’s 2011 film Bully. Hirsch and his filmmaking team follow five students in public schools in Georgia, Iowa, Mississippi, Oklahoma and Texas during the 2009-2010 year, as well as their families. Focusing specifically on the suicides of two kids, Tyler Long and Ty Smalley, who were victims of bullying, Hirsch's remarkable documentary was part of a national conversation. Bully was released two years after the suicide of Tyler Clementi, a Rutger's student who was videotaped by his roommate kissing another man. When asked what compelled him to make his film, Hirsch said that he, too, was a victim of bullying.