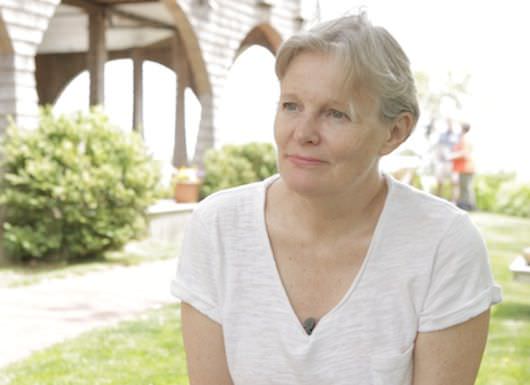 Mary Harron is probably most well know for taking Bret Easton Ellis’s notoriously gruesome novel, American Psycho, and adapting it for the big screen in 2000 as both writer and director. It has become a cult classic, cementing Harron’s status as a daring filmmaker with a penchant for taking difficult protagonists (some might argue despicable) and crafting compelling, often very funny, and ultimately challenging films around them. American Psycho was engulfed in controversy before the film even began principal photography—but Harron’s handling of Ellis’s graphic, troubling novel was sly, satirical, and ultimately satisfying. The murderous Patrick Bateman (memorably played by Christian Bale) is a monster in the book, but in Harron’s hands he becomes a grotesque clown, a would-be conquering madman who’s actually a hapless pawn in his own lunacy. Did any of what you see in the film actually happen? We asked Harron, and we’ll leave it to her in our video to answer that question.

Before she took on Ellis’s deranged banker Patrick Bateman in American Psycho, she wrote and directed the critically acclaimed I Shot Andy Warhol in 1996—a brilliant take on the true story of Valerie Solanas, who couldn’t get Warhol to produce her film so she shot him. Working with the great Lili Taylor in the role of Solanas, and Jared Harris as the greatest incarnation of Andy Warhol you’re likely to ever see, Harron created a brilliant, bold film. Four years later came American Pyscho, and after that the fantastic HBO film The Notorious Bettie Page—yet another misunderstood protagonist, this time the titular Page, played beautifully (in more ways than one) by Gretchen Mol. Harron, like many great directors, worked once again with Harris and Taylor in Bettie Page.

Harron is now on board another fascinating project—XX, an all-female horror anthology being helmed by women directors and starring women. The talent involved is immense and exciting—joining the always game Harron is Jennifer Lynch (Boxing Helena, Chained), Karyn Kusama (Girlfight, Jennifer's Body), Jen and Sylvia Soska (Dead Hooker in a Trunk, American Mary), and Jovanka Vuckovich (The Captured Bird, The Guest). Each filmmaker will develop their own story, and their work will be interspersed by the stop motion animator Sofia Carrillo.

A perfectly bold, potentially thrilling film—Mary Harron's just the filmmaker to make it sing. Here's three minutes with the woman herself.