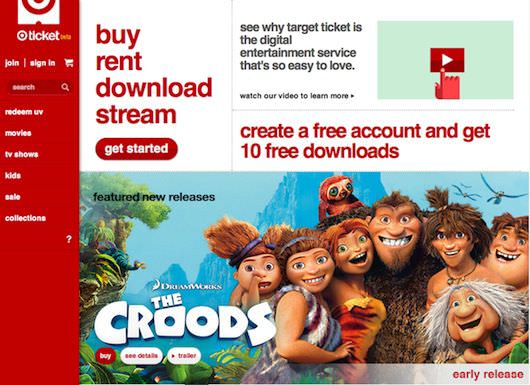 Target Ticket: The Latest Player in the Video On Demand Service

Target, the discount chain store, has entered the video on demand streaming service realm with quite a bang. Offering 30,000 movies and television shows to download, rent, buy or stream, and with their considerable presence across the country, Target Ticket looks to be a welcome addition to legal, high quality content that you can stream from almost any device.

We spoke to Target about why they created their streaming service, how they designed the site, and more.

It must be a pretty busy time for everyone involved in Target Ticket.

The site was in Beta for Target Team Members beginning in April. We’re excited that it’s officially out for everybody.

What was the thinking behind the design for the site? It's very unfussy and clean.

Exactly, the reason why we’re launching a digital video service is basically we’re simply responding to what our guests asks for. The Target Team did a lot of research to find out the type of digital service that they wanted, and we found out that a lot of our guests weren’t even using a service because they found it a little too complicated. So that was one of the goals of Target Ticket, to have it be simple. And we know that our guests want to watch movies and television shows at home and on the go, and there are multiple people in their home who want to do the same, so the service is tailored to meet these needs.

It’s great to see more credible video streaming websites like Target Ticket, because it means that the creators making this content are being protected.

We believe in maintaining the value in digital media just as we do physical media. The idea of making digital content free is not something that Target, the studios or filmmakers want to see. We want to be great partners with studios and filmmakers to be able to offer their content to our guests.

It’s so crucial in the fight against piracy to be able to offer clean, easy to navigate video streaming options that provide really high quality content. The quality a service like Target Ticket or Netflix can offer is what was intended by the filmmaker—a pirated film looks like a knockoff.

Exactly, and those relationships with studios and networks have always been important to Target, and are even increasingly more important now with Target Ticket. We have a number of exclusive partnerships within the music and film world, so if you buy a physical piece of media at Target, often times there’s an exclusive version, so we’re offering that content on Target Ticket as well.

Target Ticket doesn’t require a monthly contract. What was the thought behind that? And how malleable with the service be to change?

That was another key feature that important for us to keep it simple. Having no contract, having guests be able to view their content within 48-hours if you download a movie, and if you’re a red card holder you get five percent off, so that’s another perk. And for the second part of your question, it was really about listening to our guests about the site. As I mentioned earlier, the service rolled out to team members in April, and that was our testing and Beta period to get feedback and find out what was working really well, what did people really like, and what enhancements could be made. Even though we’ve rolled this out, it’s definitely not done by any means. We hope to evolve and keep adding—there are a number of devices that people can access Target Ticket through now, but the goal by the end of 2014 is have it be accessible through every device that has an Internet connection. So there will be lots of enhancements and taking guests feedback.

The clean look and feel of the site was a smart choice.

That really goes along with wanting to have the site mirror Target’s brand and a lot of the other content and materials that Target creates, so that was the idea for the design of the site. The marketing behind Target Ticket will start rolling out in about a week or so, so there will be some in store messaging, some print ads in Entertainment Weekly and People Magazine, so that will all mirror the Target brand. Another thing that was important when creating Target Ticket was the family friendly aspect, Common Sense Media, which is a nonprofit organization, has been a great partner during the Target Ticket process, creating reviews for all our movies and television shows that a parent can customize and create a profile for their kids, so that they’re only viewing the shows and materials they want their kids to see.