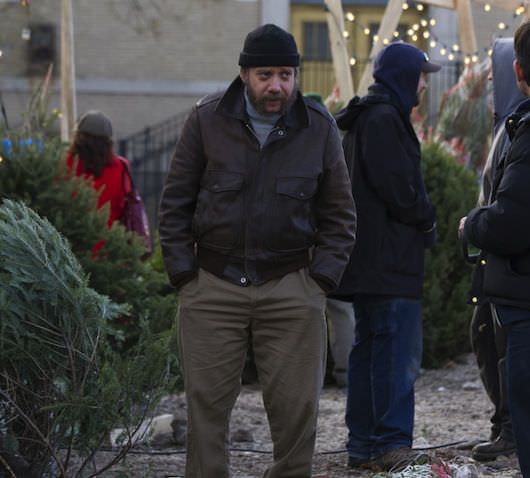 In All is Bright, Paul Giamatti and Paul Rudd play two Canadian former partners in crime who travel to New York to try and sell Christmas trees (“try” being the operative word). Giamatti is Dennis, who, out on parole after four years in the clink, finds out that his daughter think he’s dead and his wife is romantically involved with Rene, played by Rudd. Directed by Phil Morrison (Junebug,) the comedy also features the inimitable Sally Hawkins as a Russian immigrant who befriends Dennis.

We met Morrison and Giamatti at a Midtown bar in New York for a roundtable discussion about the film, available now on demand and released in theaters on October 5.

This was originally called Almost Christmas. How did the title change come about?

Giamatti: We literally had a list of 150 titles for this movie, and nobody could settle on one.

Morrsion: We were rooting for Two Thieves, which you (to Paul) actually came up with.

Morrison: All is Bright comes from "Silent Night," and I like it as a title because I think that essentially is true. In this movie, we present all kinds of ways to doubt that idea. 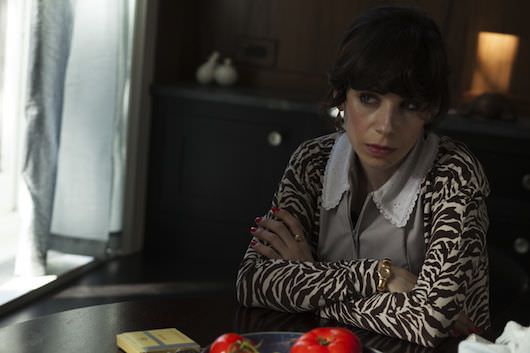 Sally Hawkins can pretty much do anything, but she’s not the first person one thinks of when it comes to Russians. Was the character always built that way?

Giamatti: She was always supposed to be Russian.

Morrison: I had always thought of Sally as someone I was dying to do something with, ever since Happy-Go-Lucky, and it didn’t seem likely that we were going to find someone who was Eastern European. She was excited about doing it.

Giamatti: I figured Sally could do anything—it never occurred to me that she couldn’t. And she knew how to play the piano, which was amazing.

Paul, how did you research the role? Did you talk to anyone in prison?

Giamatti: No, I didn’t do any research like that.

Morrison: I imprisoned him.

Giamatti: Yeah, I felt imprisoned by the whole experience (laughs). No, I figured I could imagine what it would be like to be in prison. I had to work on the Canadian accent, which Rudd does better than I do. It proved to be a much trickier accent than I thought it would be — I’d rather do a Russian accent. 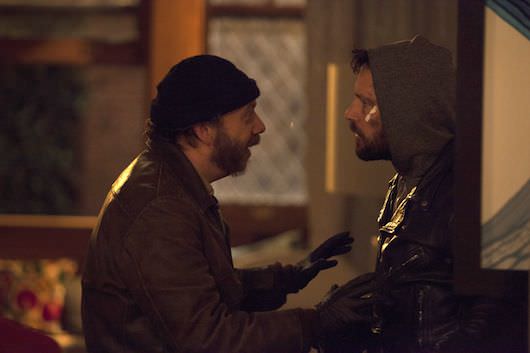 You and Paul Rudd play off each other really well. Did that come naturally?

Morrison: (to Paul) Name someone in the movie that you are a better actor than.

Giamatti: Everybody in the movie is a better actor than me.

Morrison: I had a feeling that’s what he’d say.

Giamatti: But we had some rehearsal time and stuff, so we knew what to do. He’s more light on his feet, especially in this part, so I just had to try to keep up with him. It’s hard to say who’s the straight man from one minute to the next, or who’s dumber. They’re both not very smart. It switches a lot, which I found interesting.

Was there any ad-libbing, or did you stick to the script?

Giamatti: There was some. Again, Paul is better at that than I am, so he did a lot of stuff when he was selling the trees. But the script was constructed in a way that you didn’t want to mess with it too much.

Paul, what do you look for when deciding on a project? Is it script-based, or director-based, or something else?

Giamatti: Facial hair. (laughs) Will I have interesting facial hair? And this one was a winner.

Giamatti: Real? Absolutely it was real. I’m from the school of follicle realism. If I have the right hair, I have the character. (laughs) No, I have to find the story interesting. And actually the person making it is almost more important than anything else. I like to play a nice character too. I need to be compelled to keep reading the script in the first place, which is rarer than you'd think—to actually get further than 20 pages into it. I used to be a very good boy and read the whole thing of any script I got.

What’s the least amount of pages you’ve ever read? Have you ever looked at a title page and thrown the script across the room?

Giamatti: No, no. (laughs) I give everything a chance. I generally get into it, at least beyond the title.

Your roles are so diverse. Is it hard to flip-flop between comedy and drama? And do you need to take a little bit of downtime between them, to decompress?

Giamatti: I’d like to take more downtime than I actually get. And [switching gears] is kind of what I should to be able to do. Sometimes the more extreme the shift the more pleasurable it is. To catapult from one thing to the next is actually easier than to go to something closer. To jump to something entirely different is kind of what I’m supposed to do. I have a funny notion that as an actor, you’re supposed to suddenly pop up in something, and someone goes, “Oh, that guy again, but he’s playing that!” Then they say to themselves, “That’s interesting.”

Giamatti: Sure, that’s great. People were like, “How are you gonna do this?” And I’m like, “Man, I’ve been ready to play this since I was five years old. This is easy. I know how to run around with a machine gun and scream at people and blow stuff up. That was fun.”

One of the more memorable scenes in this movie is the road trip. Do you have any memorable road trip stories?

Giamatti: I’ve driven across country a bunch of times. Once on the way from New York to Seattle with a friend, our car broke down in Eastern Oregon, in the desert. There was a college rodeo, with a lot of college cowboys. We ended up on this Native American reservation, called Nez Perce. We met some very friendly [Native Americans] for a couple of days, which was a unique experience. I couldn’t take it after two days because I’ve never drank that much in my life before. It was depressing as hell. And crazy. And I don’t remember much of it. My friend stayed there for a couple of days beyond, and I thought, “How am I gonna get him out?” It was like The Searchers. There were a lot of times I’d come to in a pick-up truck and think, “Where the hell are we?”

Featured image: Paul Giamatti as 'Denis' in All is Bright. Courtesy GreeneStreet Films.