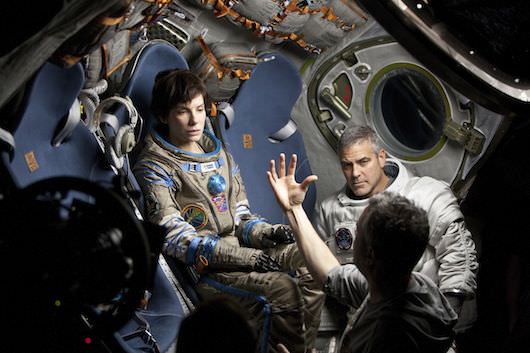 How do you create a 3D film that’s truly worth the price of admission? If one lesson can be taken from James Cameron’s Avatar, Martin Scorsese’s Hugo, and Alfonso Cuarón’s Gravity, it’s that the extra dimension has to be crucial to the narrative itself. It’s not enough to wow people—you need a good story reason for the technology, which all of the above directors had in spades.

Cuarón’s masterpiece took place in space, and to put viewers in Sandra Bullock’s weightless shoes, Cuarón and his team (including of hundreds of individuals and numerous Digital FX, camera, conversion and facial mapping companies) envisioned the film from the very start as a 3D picture. In fact, an early script he had sent to producer David Heyman was entitled Gravity: A Space Adventure in 3D. The film was conceived from the very start as a 3D movie, and Cuarón and his incredible team baked that third dimension into the very DNA of their story.

One specific moment that Chris Parks, the film’s stereo supervisor, said exemplifies Cuarón’s commitment to 3D deepening the narrative rather than calling attention to itself for its own sake is the Marvin the Martian doll moment (spoiler alert ahead). In what will likely become an iconic moment in film history, a Marvin the Martian doll floats into the audience’s space in one of the lighter moments in the film. It’s a beautiful shot, and funny, that comes a moment before a dreadful image. “We deliberately floated a Marvin the Martian doll into the audience space using significant negative parallax,” Parks told the Hollywood Reporter, “this is designed to relax the audience’s tension ahead of a whipped camera move as the characters come face to face with something dreadful (a dead body) inside the cockpit of the capsule."

This is a genuinely brilliant way to use 3D to heighten a moment of tension in the film in an organic way. Instead of using the 3D moment as the shock itself, entering the audience’s visual space with something designed to elicit a quick thrill, the Gravity team felt that, as Parks said, “it would have been out of keeping with the story.” Instead, floating the Martin the Martian doll in front of our eyes is a grace moment, a brief downshift into something pleasant, setting the audience up for the real shock just to come. This is 3D serving the story instead of the other way around.

Along with having narrative terms dictate the use of 3D, Gravity is now famous for the technological feats that allow the audience to feel as if they’re floating out there in space with the characters. Parks and cinematographer Emmanuel Lubezki had run tests with Arri Alexas cameras with 3D rigs, but the bulk and weight made achieving the fluid weightlessness Cuarón wanted impossible. This is where the San Francisco based company Bot & Dolly was brought in.

Bot & Dolly’s robotic arms were able to move into the tight spaces required in the story and give the film it’s zero gravity feel. Bot & Dolly’s robot, IRIS, combines a level of precision, flexibility, reach and strength that would be required to film the sequences in the tight interior spaces the script called for. The resulting footage amounted to 25 minutes of the film, which were shot in 2D and then converted into 3D at Prime Focus World, another key player on the Gravity team. We spoke to Prime Focus World when they converted Tim Burton’s Frankenweenie from 2D to 3D—they are one of the best in the world at what they do.

What 3D films like Gravity also require, as James Cameron's Avatar had proved before, is patience, from the studio to the filmmakers themselves. Cuarón has stated, as James Cameron had before him, that he had to wait for the technology to exist before he could get his vision to the screen. Cameron wrote the script for Avatar in 1995, before Titanic, but the technology wasn’t there to make the film he saw in his mind’s eye. Cameron and his technology partner, Vincent Pace, helped create the very 3D cameras he’d use on Avatar, but it wasn’t just that camera technology wasn’t where it needed to be, there also weren’t enough 3D theaters to show a film like Avatar on a wide enough scale. There are now.

There are few mediums more collaborative than film. Depending upon the size and technical aspects of a given movie, hundreds, sometimes even thousands of people have a hand in making a single film. Gravity was a massive team effort, headed by Cuarón but relying on the expertise and vision of men and women across all aspects of filmmaking. Along with the usual crew members on a film, Popular Mechanics listed the sundry companies and individuals who were involved in making Gravity work. These include the aforementioned Prime Focus World for 3D conversion, visual FX house Framestore, Rising Sun Pictures, additional VFX work by the firm Nhance, scanning and LIDAR work by 4DMax, more scanning by the company XYZ RGB, facial scanning by Lightstage and facial mocap by Mova.

This is to say nothing of the individuals who built Bullock’s wire-rig harness for her sequences inside the International Space Station, which was a 12-wire rig that had to be molded to fit her body exactly, with three wires attached to computer controlled servomotors. Bullock’s motions required on-set puppeteers, who helped smooth out jerkiness with joysticks. Finishing a film difficult enough—finishing a 3D film requires a level of synchronicity between all involved that mimics what’s required of rendering a beautiful, believable 3D shot in the first place.

There a lot of 3D releases coming out in the next few months that will benefit, or be harshly judged, in light of Gravity’s recent success. Some of the most anticipated titles include Peter Jackson’s next installation of his Hobbit trilogy, Universal’s 47 Ronin, Disney’s Thor: The Dark World, Fox’s Walking With Dinosaurs, Sony’s The Amazing Spider-Man 2, Warner Bros. The LEGO Movie, Godzilla and The Edge of Tomorrow, and Paramount’s Transformers: Age of Extinction. 3D is no longer a gag or a gimmick, and as the technology continues to improve it will serve as just another tool in the filmmaker’s toolkit. As incredible as the advances in cameras, robots and CGI are and will continue to be, the future of film is still rooted in one of our oldest technologies, the written word, or more to the point, storytelling.