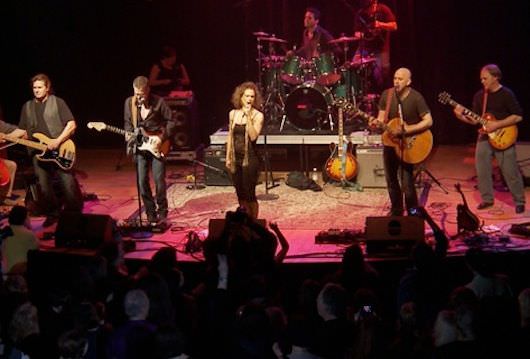 Fighting Cancer With Music & Film: The Incredible Documentary No Evidence of Disease

How do you spread awareness about a disease killing 30,000 women a year that barely anybody talks about? Naturally, you start a band.

That’s what six gynecologic oncology surgeons from all over the country did when they created N.E.D., an acronym for ‘No Evidence of Disease.’ Initially created as a cover band to entertain their fellow doctors at a medical conference, the members of N.E.D. saw the potential to reach women using a medium that had been transmitting stories for centuries. From novelty act to musical crusade, N.E.D.’s mission is much the same as Nancy Goodman Brinker's was when she founded Susan G. Komen for the Cure, after her older sister was killed by breast cancer—raise awareness, save lives. As the band began to write songs, perform, and travel, another idea surfaced—a great way to raise awareness is to make a film.

Enter Andrea Kalin and the team at Spark Media, a production company “dedicated to producing films with a social conscience,” as their website states. Kalin and her team met with N.E.D. back in 2009, only a year after they formed, and dedicated the next three years to following the band, their patients, and their patients families to create the gripping, heartbreaking, and ultimately, uplifting documentary No Evidence of Disease.

The film interweaves the experiences, and courage, of a group of remarkable women and the doctors dedicated to saving their lives. The film was recently accepted at the LA Femme Film Festival in October and the Rocky Mountain Women’s Film Festival in November. The filmmakers have also partnered with Tugg.com to hold screenings across the U.S. for organizations interested in showing No Evidence of Disease to spread awareness.

We spoke with producer Karen Simon about the remarkable life of this film, the doctors and patients it focuses on, and what you can do to fight GYN cancer, which affects 90,000 women a year, killing a third of them.

The Credits: Tell us about the origin of this documentary.

Simon: We found out about this band, five men and one woman, who happen to live all over the United States, from New York to Alaska. We got really lucky because when we heard about them it turned out that in the next month they were coming to DC for a concert. And so we arranged to meet with them, and sat around with them for about four hours. We weren’t sure what we were going to do yet, or even if we were going to do anything. Having met them, we were just totally mesmerized by their personalities, their drive, and their passion for their work as well as their music.

So what was the first step in filming?

That must have been an incredibly emotional process. How did you decide how to break down all the footage you got?

We had many ways to go, in terms of themes and threads to follow, and what it came down to was a decision to talk about the band and their impact on their patients and women in particular. So basically that’s how it all started. The focus on is on the band’s effect on the patients, the music’s effect, the healing power of music both for patients and for doctors, and the power of music to create awareness in a way that just talking doesn’t.

It's incredible these doctors have the time to do this.

Yeah, these are doctors that have put in twelve to thirteen years in school in training post college, and their jobs are so emotionally intense and draining that they really were at a point where they needed an outlet. They’ve all been passionate about music their entire life, they’ve all been musicians before medical school, and this is another way to be able to communicate with their patients. Not only their patients, but all everyone, to make them aware of what is happening to so many people. It's a vehicle to raise awareness about women’s cancer, it’s a tool for healing, for both the doctors and the patients and their families, and it also kind of a fantasy come true. They get to be rockstars.

How do they have the time?

They write music individually, they do a ton of work over the Internet, and one of the doctors has a very, very sophisticated music studio that he built in his home. Each has a role that they play, and the music goes back and forth between everybody. Then they’ll get together, making plans often months in advance, and then they’ll practice for twelve hours straight together, and then perform the next night. Then they’ll practice five hours the next day. But they do a lot of it on their own, and lot over the Internet.

How are they getting the music into the hands of their patients?

Here’s the thing that’s really interesting and frustrating at the same time—they actually want to reach way beyond their patients. Their whole idea is to appeal to people who don’t have cancer, too. They want to appeal to anyone who’s listening to the radio and to have somebody say, ‘Boy, I really like that music, who’s that by?’ And then they hear it’s by N.E.D., ‘What’s N.E.D.? No evidence of disease? What does that mean?’ So to take it to the next level so that people beyond their patients hear their music.

Are the songs themselves about GYN cancer?

The music is about life experiences. And there is music that you could totally relate to if you knew nothing about cancer. There are love songs, and there’s hard rock, they have all kinds of songs.

So can you explain the title, No Evidence for Disease?

When a doctor writes on the bottom of a chart, after a patient has been treated successfully, whether it's post surgery, post chemo, or post radiation, ‘N.E.D.,’ she has no evidence of disease. It is a term that women know, but doctors use that term with patients as much as they say, ‘You’re cancer free right now,’ or ‘you’re in remission.’ And interestingly enough, the working title of the film was called Dancing With N.E.D. And no one understood what that meant, but once you did you thought, ‘Oh my god!’ What it means is a woman would say, ‘I am dancing with N.E.D.,’ meaning I have no evidence of disease, and I want to stay that way. When the band themselves were coming up with a name, the name itself informed their reason for being. When one of the docs, Nimesh Nagarsheth, was flipping through his charts, he found the name of the band. So they took a vote on it and decided on it and that was really a rallying point for them.

As the producers is there anything you’d like our readers to know?

The film is a real humanity piece, and an awareness raising piece, but what is the call to action once you let everyone know that there are these cancers? And women of all ages especially need to be aware of it and get talking about them, as we used to not talk about breast cancer? Well now everybody talks about breast cancer. It has to be the same for GYN cancers? And why? Because women find out too late, that the symptoms are a matter of life and death. So often women say, 'I just didn’t know.' And they find out then the ovarian cancer they have is stage 3 or stage 4. When 30,000 women a year die of a gynecological cancer, knowing that so many of those lives could have been saved, that’s the driving force of us. We’ve seen it time after time, through three and a half years of filming. My message is, the call to action is, now that you’ve seen this film, go to our website and look at the piece ‘What Every Woman Should Know,’ it’s 16 minutes, it’s all the signs and symptoms of the five GYN cancers, and it’s done in a way with music and graphics and all kinds of patients and survivors, and it’s encouraging and uplifting and inspiring. Hopefully it will get people to talk about these cancers, get them to go to the doctor, get them to urge their mother to go to the doctor, their friend, their sister, that’s really what we’re after—to make some noise about these cancers.

I can leave you with a quote from the film, as Dr. Joanie Hope says, ‘Breast cancer has its pink ribbon, but GYN cancer has a rock band.’

You can donate here.