German director Oliver Hirschbiegel is no stranger to controversy. His 2004 Oscar-nominated film Downfall triggered rancor in the German press for its complex, humanistic depiction of Adolph Hitler, played by Bruno Ganz. Now Hirschbiegel faces another firestorm in Great Britain for Diana, a portrait of another larger- than-life figure: Diana, Princess of Wales, played by Naomi Watts. The British press has been vitriolic towards the film, which is based on the book “Diana: Her Last Love”  by Kate Snell, and is about the last two years of Diana’s life. Divorced from Prince Charles and isolated from the royal family, she begins a secret romance with Pakistani heart surgeon Hasnat Khan (Naveen Andrews), whom she meets in a London Hospital.

The Credits spoke with Hirschbiegel about the controversy, and how he helped Watts transform herself into one of the most famous women in the world, and how she might in reveal something new about Princess Diana to audiences.

The Credits: Were you surprised by the negative reaction to the film in the UK?

Hirschbiegel: You know what? it doesn’t surprise me. When I made Downfall it was a huge controversy in Germany, with people claiming it was awful, terrible, worthless. Diana is a very straightforward, universal love story. I tried to keep irony out of it because, for me, it had no place there. Emotions scare the Brits quite a bit. This is depicting their Diana, and they can’t bear it. They don’t want to see it [as depicted in the film]. The response is different in other countries. At the end of the day it seems to be  how open one is to a romantic approach: how much am I willing to let emotions go? Germans, deep in their hearts, are more romantic. Maybe that’s why they love American movies. You guys have it in you too; the aspect of deep emotion is stronger. Americans seem to dig romance more than the English.

The British tabloids were relentless with Diana during her life; now the tabloids seem to be relishing the negativity toward your film.

The Diana you see in the film was during the last years of her life … she was incredibly lonely and isolated. It was a sad existence which I think is in the film: a melancholy, sad undertone. The same people who put her down then are doing it again and there’s not been a single voice in the UK saying, ‘Now wait a minute guys…’ It’s been like hysteria.

How closely did you work with Naomi Watts to make this less an impersonation but more of an interpretation of Diana?

No one could look or act like Diana; that would have been the wrong approach and I don’t believe in that, anyway. I believe it all comes from within. Naomi is the only actress who could pull it off because she’s got that ability to become the character and make me forget she’s trying to be someone else. At the same time, she did so much work and training as an actor to get the mannerisms, the look, the movement, the way she talked, all right in a way that we ended up with a scarily close look-a-like. I often forgot I was watching a performance. We didn’t set out for that; in real life, Naomi does not look like Diana. It’s all an energy thing.

Bruno [Ganz] doesn’t look like Hitler at all. It comes from within that makes the performance — for that shot time in front of the cameras, it makes them look like the character. It’s a bit scary, actually. 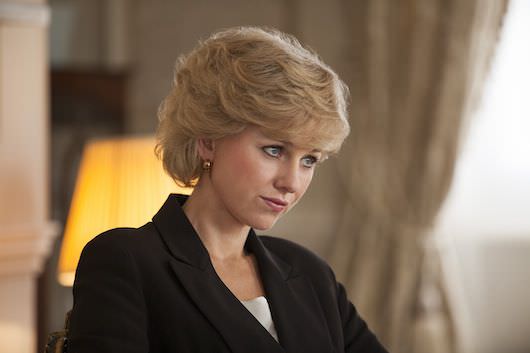 Was there anything specific that you suggested to Naomi Watts in order to help her get at, for lack of a better word, the soul of Diana?

Acting is a strange craft. I believe a lot of what actors do and what directors do comes from deep energy work, really. You don’t learn to become a director: you are a director and the same goes for acting, really, they are actors who do additional training and study. You’re a member of a tribe. It becomes an amalgam of the right things. I work with my actors a lot without talking. We get each other, and sometimes it’s technical things — did I get that look right, did I get that expression right? It’s all energy, really.

It must have been a challenge to depict a woman so publicly exposed.  Did you uncover anything about her character that we didn’t already know about?

The most interesting aspect of her character that I found was her spirituality. I never really felt it was written about much. Oonagh Toffolo (played in the film by Geraldine James), whom I met twice, talked to me about it. It’s in the film, in subtle ways, such as Diana getting acupuncture, lighting candles, things like that.

I read where you said that Diana was more complex than Hitler. Can you explain what you meant?

As a man, women always are the more complex characters. We men are more simple minded, we tend to have a target, a focus and try to get it and not look right or left. Women have that multi-tasking thing, as characters they can be constantly contradicting, much more than I’d find in any male character, which makes it difficult to write a full bodied, three dimensional woman character.

Diana is constantly contradicting herself. There’s an innocence about her; at the same time, she is very confident, flirtatious, wickedly humorous, totally fragile, unsteady, irrational, uncontrolled. She would cut off a friend just like that. Whenever you think you’ve got her, you've understood her, it’s, ‘No, look what she’s done now.’ We’re not talking about an intellectual. She is highly intelligent but not educated, not academic. She is fascinating. I think the Brits don’t want to see her like that.

Many scenes in the film show Diana being photographed and hounded by paparazzi, but she also courts the press. How did you strike that balance between her media savvy and her naiveté about how the media used her?

She used the media and she needed it. She was deeply insecure. She was an insecure person, like many actors are. She needed the limelight and the public attention. At the same time, she was isolated from the rest of the world. She was like an old-fashioned film star in many ways, but it was more complicated than that. She was a deeply spiritual person, that’s the key to understanding this woman: she was, spiritually, an old soul. That goes for Hasnat, too; he was an old soul too and that’s why they connected so well.

Featured Image: Director Oliver Hirschbiegel and Naomi Watts on the set of Diana. Courtesy Entertainment One.