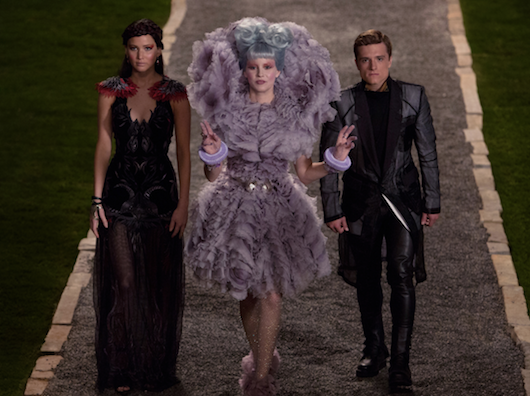 Here's what you don't need on Halloween—another article telling you what to dress up as, what not to dress up as, what other people are dressing up as, what people used to dress up as compared to what they dress up as today, and why going as Effie Trinket is played out/totally cool/beneath you/perfect. Whether you’re going as Khaleesi, Catniss, Ron Burgundy or Gollum (major points for anybody brave enough to wear the Gollum Diaper™), there are thousands of articles on movie character Halloween costumes, and you certainly don’t need another.

So what is this about, then? What we've done is looked at classic Halloween or costume scenes in the films themselves to see if we could find anything truly worth mentioning that hasn't already been discussed (it's getting harder to do that). What we've found is that some of the most memorable Halloween scenes in movies have some surprising or overlooked elements that left us slightly bewildered. Then, there are a few just patently bizarre costumes that we need your help explaining.

So here goes, a quick tour of some classic (and lesser known) costumed moments in film, with a few questions to boot.

You’re thinking, wait, did the schmo writing this suffer a concussion? Why is a movie about a white man defending an innocent black man in the insanely prejudiced Depression-era South on this silly Halloween list? Because of the ham costume, that’s why. Someone please explain the ham costume to us. Also, the ham costume is totally incredible.

The Halloween scene from E.T. is rightly lauded as a mini masterpiece within the larger film, plus it’s a major turning point in the story (it's the night of Halloween that everything starts to fall apart for poor Elliot and E.T.). People often talk about that fantastic moment (at the 2:12 mark) where, through E.T.’s POV under his white sheet (he's a ghost), we see a little kid expertly dressed as Yoda walk past him. E.T. stops, turns, and tries to waddle after him, repeating  “home, home.” The moment works as a tip of the cap to Spielberg's pal George, as well as a genuinely funny, touching moment. But really, what we find most bizarre about this whole scene is Elliot and Michael’s costumes, which appear to be, in Elliot’s case, that of a homeless person, and in Michael’s, an actual hobo, complete with the necessary hobo five o’clock shadow…plus a meat cleaver through his head?  Was dressing up as hobos a thing in the early 80s? It's probably silly to try and unpack a child's thinking when choosing a costume, but it's easy to understand why someone would go as Yoda or a ghost or a ninja or zombie, but a destitute person down on their luck? With a major head wound?

The Halloween party scene in the original Karate Kid does not get enough credit as one of the most memorable sequences of any film in the 80s. It had everything—potential romance, mortal terror, William Zabka’s legendary performance as Johnny Lawrence, arguably the most colossal bastard in the history of high school bullies (of the non-murdering variety). There's even some drug use—the Cobra Kai boys, dressed as menacing skeletons, smoke pot in the bathroom. There's also, of course, the scary beating the sociopath Johnny and his pals put on poor Daniel, and Mr. Miyagi's epic arrival to save the day. Pat Morita, you are sorely missed. But the thing that stands out most was Daniel's incredible costume. Everyone remembers the Crane Kick and Daniel going from pouty punching bag to resilient bad ass, but how come we're still not talking about his potential future as a great costume designer? The kid created one of the most ingenious methods of escaping unwanted attention while simultaneously creating a safe space to woo said bastard Johnny's girlfriend away, and the costume just looked cool. Daniel Larusso, unheralded costume genius, gifted the world with the shower costume. Want to make one yourself? Fine, go nuts:

Technically not a Halloween scene, or even a costume scene, for that matter, Spike Jonze and Charlie Kaufman’s story about puppeteer Craig Schwartz (John Cusack) finding a portal into the head of John Malkovich is gloriously bizarre and filled with weird Halloween-like elements.  This moment of Malkovichian mayhem in particular cries out for, well, we're not sure what. It does makes us wonder when might some guy might don a dress, shave their head, and simply tell confused Halloween party goers that they’re going as Malkovich? Or what about a group of Malkovich’s, from Malkovich the waiter to Malkovich in the turtle neck to, the best of all Malkovich’s, which you’ll see at the 1:07 mark below, Malkovich the piano singer? All we have to say is Malkovich, Malkovich, Malkovich.

Playing off the classic nightmare of showing up to school in your underwear, this well known scene is fairly basic and totally implausible on several levels, not least of which is why Bridget wouldn't just run as fast as she could the other way when she saw that it was a proper British garden party she was attending. But who cares about plausibility when you have a perfect line reading at the 1:00 mark?

Jason Segal’s Tom Solomon and Emily Blunt’s Violet Barnes meet-cute at a costume party, Blunt as Princess Di and Segal as a giant bunny. They hit it off instantly. But that’s not the moment we like best—it’s years later, when things get rough in their marriage while they’re living in Michigan and Segal goes back to the bunny outfit (at the 1:35 mark) that is fantastic. Look at the sad wear and tear on that thing. Look at the mustache. Look at this beautiful visualization of a man who has given up on himself, and his marriage.

*One piece of advice—big bunny costumes, or any head-to-toe fluffy or furry getup, really only works for tall dudes like Segal. On shorter men, you end up looking like a confused stuffed animal just recently brought to life.