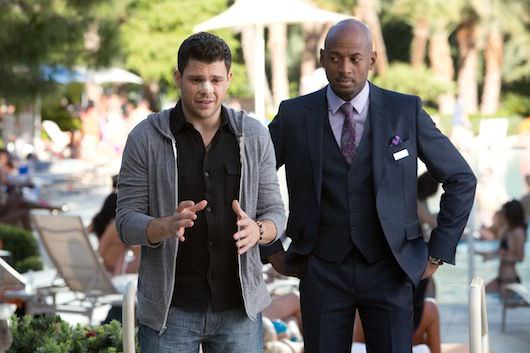 Chatting with Jerry Ferrara About Last Vegas, Being Punched by De Niro, & More

In Last Vegas, which boasts the tagline, “It’s going to be legendary,” legendary actors Michael Douglas, Robert De Niro, Morgan Freeman and Kevin Kline play four old friends (literally) who throw a Las Vegas bachelor party for the only one of them who has remained single all these years. Call them The Wolf pack, 40 years later.

The movie, which hits theaters November 1, was directed by Jon Turteltaub (National Treasure, While You Were Sleeping) and also stars Mary Steenburgen and Jerry Ferrara. We spoke to Ferrara about working with “The Mount Rushmore” of acting, getting punched in the face by Jake La Motta and filming the Entourage movie (hint: the script is done!).

The Credits: This lineup of talent is incredible. How did you first get involved?

Ferrara: I got the script, and just as I finished reading it, they announced the whole cast, and I thought, “Wow, this just got real interesting.” I had to audition, which is not always my favorite process, but in this situation I was just so motivated. These guys are the Mount Rushmore of acting. Whatever I had to do to get the chance to work with them, I figured I’d do.

How did you prepare to play Todd? Did you hang out in L.A. clubs and observe the hanger ons?

It didn’t really require that much research (laughs). I’ve been running around long enough. I had a lot to draw upon. The hard part was that I had to really be a dick. I guess some people would disagree, but that doesn’t come that naturally to me (laughs). Everybody was like, “You can’t be a big enough asshole.” So I just went in and had fun with it. And apparently, I can be a good asshole.

What was it like getting punched by De Niro?

Yes…Mr. Robert De Niro. I’ve been really fortunate with two specific things in my acting career: One: Love interests, and two: on-screen fights. I was undefeated in on-screen fights going into my match-up with De Niro, but if there was ever a time to get beat-up on screen, you can’t have a better person than Robert De Niro to punch you in the face. It was the coolest thing.

Did you watch Raging Bull the day before the scene to gear up?

I could do a one-man show of Raging Bull. It’s my favorite movie of all time. I always try my hardest, and I want the movies and the TV shows I’m working on to be good, but I almost didn’t care what the end result was, or whether people like my performance in this one. If Jon Turteltaub decided to cut me out of the movie, yes, I’d be upset, but I got so much out of this experience, it’d be worth it.

Did you get any quality one-on-one time with the Mount Rushmores?

I mean, I have a million questions for those guys, but I’m not gonna do that. I decided to speak when spoken to. They had some unbelievable stories, but it wasn’t like I was sitting around like, “Tell me about Scorsese…”

What other roles are you dying to play?

I’d love the chance to play an athlete, but I guess maybe high school football because I’m really small. Maybe they’ll remake Rudy. But they did such a good job with that, I don’t really know if there’s a sequel involved. I love flaws. I think all people have their positive and negative qualities, and if I can somehow make that his flaw his likable trait, that’s interesting.

Tell us about being on a Peter Berg set in the upcoming Lone Survivor. He seems…intense.

I’ve known Pete for a while now, and I love him as an actor and a director. I worked on Battleship a few years ago and really got to know him. He really knows the story of whatever it is he’s directing so well, but he’s got flexibility as well. Pete’s just a master. I can’t rave enough about the guy.

Would you ever go back to TV?

I would definitely go back to TV. I don’t understand anyone who walks around saying, “No TV—never again!” How could you say that? If a Tony Soprano role comes around, you’d say no? I call bullshit on that. I’m actually writing a TV show with a buddy of mine, so if I do go back into TV, I’d kind of like to take a swing at telling a story I want to tell.

Is it top secret?

It’s not top secret like it’s 24, but a pet peeve of mine is people who talk about stuff that’s not done, and we’re not quite there yet. I don’t want to be that guy.

I respect that. Can you tell us the very latest on the Entourage movie? I’m sure you get asked a hundred times a day…

It’s definitely a lot closer. The script is done. Doug Ellin did a great job.