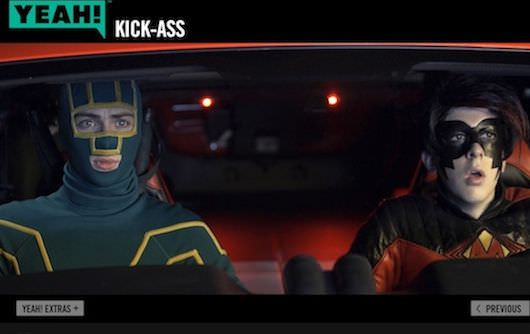 Did you know that Daniel-Day Lewis was almost cast as Vincent in Pulp Fiction? Or that for the infamous adrenalin needle scene, Tarantino filmed it in reverse? Or how about hearing from Wes Craven himself what childhood scare first gave him the idea for Freddy Krueger? Welcome to AMC's new streaming service, YEAH!

It seems like about once a month a new on demand streaming service debuts. This is a good thing. Finding the content you love and streaming it legally, at the highest quality, is a boon for you, for the filmmakers who created the content, and for the creativity community at large. Now, new streaming models have begun offering more than just the latest movies or TV shows we love, and AMC Network’s six-month old streaming service YEAH! is among one of the most intriguing players to enter this growing market.

“As a cable programmer, we all looked at the streaming movie space online to try to find an opportunity,” said Lisa Judson, the general manager of YEAH! We spoke to Judson at YEAH!’s booth at New York Comic-Con, as Walter White, his alter ego Heisenberg, Bane from The Dark Knight Rises and several Power Rangers ambled past. AMC saw a very robust video streaming sector and took a hard look at what they could do differently.

One issue that they had to contend with right off the bat was the fact they don’t own the copyright to any of the movies they’ve programmed over the years, instead they’ve been a licensee. “If you’re not a content in owner in this space, then you need another kind of tremendous advantage to have a viable business,” Judson says.

Judson listed the behemoths AMC was up against when creating their unique model. “Apple sells movies, but their core business model is selling hardware and software, so their content business is really deeply discounted to be able to sell their hardware. Amazon has a great selection of movies and titles and TV shows, but they’re really trying to build their e-commerce base to sell you other things as well, and they deeply discount. Netflix has a huge first mover advantage…so if you’re looking to enter the marketplace now, it is challenging, you need to own content or have some other advantage. We didn’t really have either.”

What AMC knew was they were not going to get into the streaming business and have the scale of a Netflix, Hulu or HBOGo. What they do have, in spades, is a deep love for, and knowledge about, the films they have programmed over the years. YEAH!’s staff takes a film that AMC is licensed to screen, like This is Spinal Tap, researches the story behind the film for months, and then interviews the filmmakers (like director Rob Reiner) and weaves these threads—video interview, facts, secrets, quizzes, polls and more into the narrative. You can watch a film and learn about how the scene you are watching was shot, meet the makers behind the scene, and do this all in real-time as the movie plays. It’s curated streaming content, unlike any service currently on the market.

“We spend months doing research on these movies,” Judson says. “We read and watch everything that’s ever been written or taped about them, and we do additional interviews. We don’t take DVD extras and repurpose them here, ever. We do all of our own interviews, and we create an interactive story underneath the movie.”  Playing around on YEAH! on an iPad, I watched the opening scene of Blade Runner and read a series of intriguing bursts of text beneath the frame, explaining great facts about that famous scene’s creation.

“We hyperlink anytime there’s a new person, location, or something that people are usually curious about, right then and there on your screen,” Judson says. “It’s all in one place so you can access the information easily and quickly.” Although YEAH! is only six months old (they launched at South by Southwest), they’ve had remarkable success nabbing big name talent for interviews because they’re offering filmmakers a chance to narrate their own films. Judson pulled up A Nightmare on Elm Street on the iPad, and then an on-camera interview YEAH! did with director Wes Craven.

“Part of what Wes told us was that as a filmmaker, he had done dozens of DVD commentaries, but he’d never had an opportunity to tell the real story behind a particular scene,” Judson says. “It’s very powerful for a movie fan to be able to experience what the filmmaker really had to say at the moment that you’re watching the movie. In some ways it’s even more powerful for the filmmakers, because these are stories that they’ve never told, or never told in the context of the film.”

As a film lover, it's a joy to hear Craven discuss his inspiration for Freddy, the lunatic dream-invader of his Elm Street films. When he was a child, Craven was awoken by the sound of someone shuffling down the street outside of his window. It was an old man, in a fedora and a trench coat (the fedora was Freddy’s hat of choice), who stopped in the middle of the road and looked directly at the young Craven. “It scared the hell out of me.” What prompted Craven’s imagination even further, ultimately leading to the creation of the knife-fingered freak, was the old man entered his family's small apartment building. “I went and woke up my older brother Paul, and he went downstairs with a baseball bat. The guy was gone. But I never forgot that, it stayed with me the rest of my life. The idea of an adult, with a fedora, a long coat, that sort of a figure is what every child is afraid of. And I think a lot of the genre films have that sort of evil father, almost from fairy tales.”

“Wes Craven told us that his interview with us was the best interview he had ever had," Judson says, "and I don’t think he was just telling us that…he said that this is just an amazing tool, because every filmmaker has stories and intimate moments that they love to share, especially on a film that was so critical to their careers.”

YEAH!’s been able to nab well known directors of beloved films, like Craven, John Carpenter for Halloween, and Rob Reiner, for This Is Spinal Tap. They've also attracted newer talent, like Francis Lawrence, director of the upcoming The Hunger Games: Catching Fire. Lawrence sat down with YEAH! during a break from editing Catching Fire to discuss his first movie, Constantine.

“This is a guy whose got a lot on his plate, Catching Fire is his fifth film, Constantine was his first film, and he literally walked out of the edit room from Catching Fire and walked into another room in his office where he met with us for over an hour to talk about Constantine," Judson says. “That’s the kind of response that we’ve gotten from the talent.”

YEAH! has a long way to go to get their catalogue of curated films into the robust state they envision. Because each film curation takes months, they currently only have 27 films curated, with another 300 in the pipeline. It costs $4.99 to access one of their curated films, or between $1.99 to $2.99 for their non-curated films. Unlike many of the other players in the on demand video streaming game, YEAH!’s films aren’t chosen by algorithm.

“What we’re trying to do is super-serve passionate fans of horror, for example, or a particular horror film like Scream, and so we’re doing it by hand, the old fashioned way,” Judson says. YEAH! is also investing in the studios catalogue content, adding new dimensions to beloved films and creating new incentives for people to take another look at Caddyshack, Jackie Brown and From Dusk Till Dawn.

“We see ourselves in some ways as a partner to the studios, in terms of marketing content and selling it, rather than as a straight retailer, which is the traditional video on demand experience.”

Whether you’re listening to Juliette Lewis describe life on the set of Natural Born Killers or hear what director Catherine Hardwicke has to say about shooting The Twilight Saga: Breaking Dawn Part 2, YEAH! is betting that film lovers (and film obsessives) will see the value in their curation streaming service. Listening to director Richard Donner describe meeting Marlon Brando before filming began on Superman: The Movie, and Brando's thoughts on what people on Krypton might look like (hint; like a certain breakfast food), is worth the price of rental and then some.