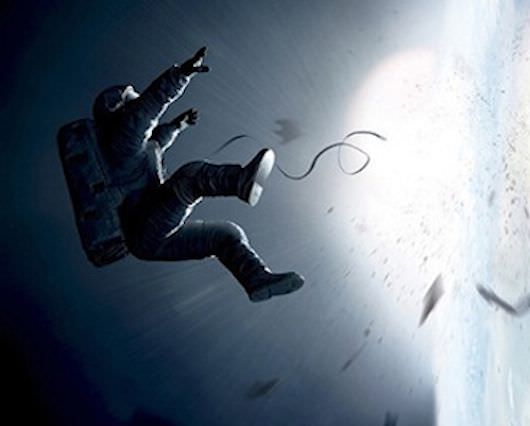 What’s it Like to be a Science Advisor for Alfonso Cuarón’s Upcoming Gravity?

Cuarón reportedly spent five years perfecting the look of scenes set in zero gravity, but figuring out how to film floating actors was just one of many technical details necessary for a movie set entirely in space. And one key player in the film’s accuracy never stepped foot on the set.

Three and a half years ago, Cuarón and his Gravity co-writer and son Jonás Cuarón met Kevin R. Grazier, bringing with them a long list of questions about space. Grazier, a research scientist who consulted on the science of TV shows like Battlestar Galactica and Eureka, said he was struck by their attention to detail.

Fortunately for the Cuaróns, Grazier has worked parallel careers in entertainment and space research for the past 10 years. At that time, he was working part time on NASA’s Constellation Program, which came in handy providing contacts with hands-on experience, for example, on a Russian Soyuz capsule like one in Gravity.

“Unlike a TV show, where you’re involved on a regular basis, [working on Gravity] was a quick flurry of a lot of activity and then done,” Grazier explained. He offered notes during script development, set up connections with people at Space Center Houston, and eventually saw the trailer and clips for the first time–like a lot of other sci-fi fans–at San Diego Comic-Con this year.

So what’s a former employee of NASA's Jet Propulsion Laboratory doing working in the movie business? During grad school, Grazier and a friend submitted an unsolicited script to Star Trek: Voyager, a show with an open script submission policy, and ended up getting a call seven months later from Paramount Television offering the opportunity to pitch additional ideas. A fan of sci-fi TV like Doctor Who, Grazier took the chance and ended up making connections that led to later TV work with Trek story editors Michael Taylor and Bryan Fuller, who went on to executive produce current shows Defiance and Hannibal, respectively. Grazier works on Defiance now, and also worked with Taylor on Battlestar Galactica, the first show Grazier landed on as a science advisor in 2004.

“It’s a really fun part-time job,” said Grazier. “You’re not a science copyeditor,” he said. “You get involved in various stages of the story creation process.”

Grazier’s consulting job on a TV set can range from offering notes on the script to pronouncing jargon, from filling a whiteboard with relevant equations to writing original pages of a technical manual used in a scene (something required twice on Eureka).

Hollywood science consulting is a small field, but growing along with the popularity of science fiction on both film and television, a trend that led to the National Academy of Sciences launching The Science Entertainment Exchange in 2008. The Exchange keeps a database of scientists and their expertise to match up with requests from filmmakers. Producers and writers are becoming more aware of what Grazier calls “the power of getting the science right” … and perhaps of the power of fan scrutiny, as well.

“If you make a technical gaffe, especially one you don’t have to make, one that’s easily preventable, you will take a good chunk of your audience and transform them from somebody who’s immersed in your creative vision to one who’s sitting amongst four walls and a ceiling in the 21st century saying, ‘No. Really?’” Grazier said. In the Internet age, that kind of mistake is magnified even for people who didn’t catch it in the moment.

It’s even happened to Grazier. He finds it “kind of painful” when movies or TV get science wrong “where they don’t have to,” but he also sees the writers’ perspective when it’s necessary to compromise accuracy for story. Sometimes that compromise might be as small as a space station hatch opening in when it ought to push out, Grazier suggests.

“As a science advisor, you go in knowing the story trumps science, period,” he said. “We’re not doing documentaries.”