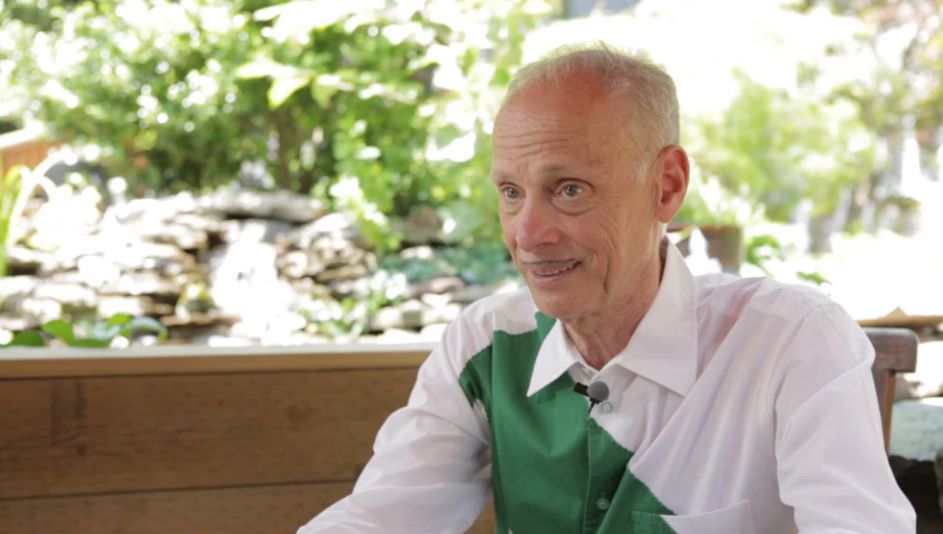 Singing for his Supper: 7 Questions With Icon John Waters

How many of us can say we really did it our way? Frank Sinatra sure seemed like he did. Who else? Who else seemed to not only live the life they wanted to lead, but a life that was in many ways counter to the way everybody else was doing it? Sinatra certainly did it his way, but he was hardly an outlier—he had a whole pack.

You know whom I’m driving towards, because if you’ve got this far you’ve already read the title. John Waters, filmmaker, actor, comedian, visual artist, journalist, art collector, provocateur—a man who has done it his way.

Waters was born in Baltimore, a city he has been fiercely loyal to (he still spends most of his time there) and where all of his films are set. When he was a boy he met Glenn Milstead, who became his friend, his muse, and ultimately, Divine, who would go on to star in some of his most notorious, boundary pushing films (as well as his crossover hits like Hairspray). He staged puppet shows as a child, and eventually, for his 16th birthday, received  an 8mm camera from his grandmother. Waters eventually ended at NYU, where he was promptly kicked out for smoking marijuana.

He returned to Baltimore and made films, eventually, along with Divine, establishing a group of local actors known as the Dreamlanders. Waters made three films in the early-to-mid 70s which he called his “trash trilogy,” Pink Flamingos, Female Trouble, and Desperate Living. These films challenged almost every convention of propriety, taste, and censorship you could imagine. Yet the trilogy is not some bizarre celluloid collection of one person’s out of control ID—they’re beloved films, cult classics, inspiring countless young filmmakers.

Pink Flamingos, Female Trouble, and Desperate Living are monuments of filth, perversion, and bravado. They became cult classics. In Pink Flamingos, Divine will stop at nothing to preserve her status as “the filthiest person alive” (so named by a tabloid paper in the film). The lengths she goes to retain this title have to be seen to be believed. The only pink flamingos to be seen in the film are in the opening credits. Now, you can’t think of the plastic lawn ornaments without thinking of Waters or his film. After Pink Flamingos came out, the flamingos began going from the lawns of small, working class homes to ironic statements on the grounds of upper-class manses—the Smithsonian Magaizne even wrote a piece about it.

New Line Cinema picked up Waters’ trash trilogy for distribution, and eventually he was premiering his work at the Baltimore Senator Theater and occasionally the Charles Theater. Starting in the 1980s, Waters films began to be seen by a wider audience as they took on more of a mainstream appeal (but mainstream Waters’ way). Polyester, Hairspray, and Cry-Baby enjoyed more exposure than he had ever received before. Hairspay has since gone on to become a hit Broadway musical (it swept the 2003 Tony Awards), with the musical itself being adapted for the screen in 2007. Cry-Baby, which was a musical in the first place (and starred Johnny Depp) was later converted into a Broadway musical.

Waters career includes photo-based installations (he was given a retrospective at New York’s New Museum in 2004) as well as books of essays, profiles, an autobiography…the list is too long to include.)

In May of 2012, Waters hitchhiked across the country, from Baltimore to San Francisco. It took him eight days and about 15 rides to complete, and he’s turning the experience into a book entitled “Carsick” for Farrar, Straus & Giroux. It shouldn’t be a surprise that the charming Waters had a charmed experience—he copped several rides off a 20-year old Maryland councilman (a Republican, no less) who drove him from Maryland to Ohio, then reconnected with Waters in Denver and drove him to Reno, eventually meeting up with Waters a third time to tour San Francisco and take a peek inside his apartment.  When he didn’t have the councilman to count on, Waters found himself on a stretch of Interstate 70 where he was picked up by the indie rock group Here We Go Magic.

Such is the charmed life of a charming man. We had the distinct pleasure of spending some time with him over a summer day in Provincetown (where he keeps a summer house) to talk about his career, his life, and what might be next for a guy who has come as close to ‘doing it all’ as one could reasonably ever dream.