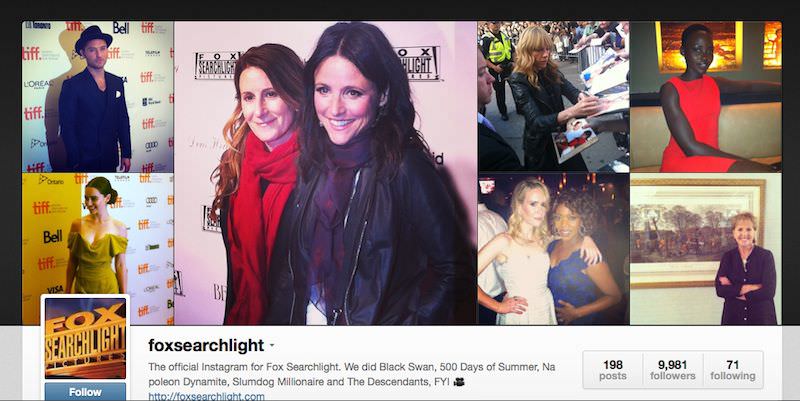 From gradient sunsets, to antique-filtered airplane wings, gourmet food dishes, and pets being cute – Instagram has fast become the preferred platform for sharing important and trivial moments alike with followers near and far.

Since its inception in 2010, Instagram has become a veritable channel for staying engaged with and informed by influencers. And for movie lovers, that means keeping up-to-date with studios about new releases and exclusive movie news.

Whether it’s studio premieres, stills from classic films, behind-the-scenes shots, or movie-themed memes, Hollywood’s top studios are making it easier than ever to connect with the films we love and the talented people who make them. Here are eight great accounts to follow for the ultimate cinematic Instagram experience:

Warner Bros. – Warner Bros.’ Instagram feed features stills and memes from their new and upcoming releases. Among the many great photos, you’ll find reminders about highly-anticipated hits like The Hangover III’s Blu-Ray release, to beautiful scenes from movies like The Great Gatsby, and quotable dialogue from memorable films like Jack and the Giant Slayer.

Universal Entertainment– Universal’s Instagram feed showcases the studio’s fantastic films, in addition to images from new release premieres, film stills, and trivia. At present, followers will find photos from the film The Place Beyond the Pines, Oblivion, and Despicable Me 2.

Disney– Disney’s Instagram feed is as magical a reprieve as its flagship amusement park. Followers will find plenty of great photos in the company’s feed, from shots of Disneyland rollercoasters to film stills, shots from classic Disney movies, and plenty of Mickey Mouse ‘#selfies.’

Paramount – What do Brad Pitt, Will Ferrell, and the Paramount Studios lot entrance all have in common? You can find shots of all of them over on the Paramount Pictures Instagram. The studio’s feed is a hotbed of fun film stills, homages to the Paramount lot, and memes from some of the film house’s most meme-worthy movies, like Anchorman 2 and World War Z.

Sony– The Sony Pictures Instagram feed is a great place to keep up with new Sony releases, check out studio memes and countdown to upcoming flicks. Visitors will find stills from the One Direction: This is Us premiere, quotes from Elysium, images from The Mortal Instruments, and much more.

20th Century Fox – From Wolverine to The Croods, 20th Century Fox has a fun and engaging Instagram feed. Followers will glimpse quotes from movies like Parental Guidance and Life of Pi, in addition to reminders about anticipated upcoming releases.

Fox Searchlight – For fans of film fests, Fox Searchlight boasts a ton of in-the-moment stills from this year’s Toronto Film Festival, as well as promo photos from upcoming films like Baggage Claim, 12 Years A Slave, and Enough Said.

Marvel Entertainment – Film buffs and comic book aficionados alike will appreciate the dynamic Instagram feed from Marvel. Premieres, celebrity snapshots, and your favorite Marvel comic book heroes from Thor to Ironman all convene in one colorful feed that adds up to a stimulating – and seriously entertaining – Instagram follow.