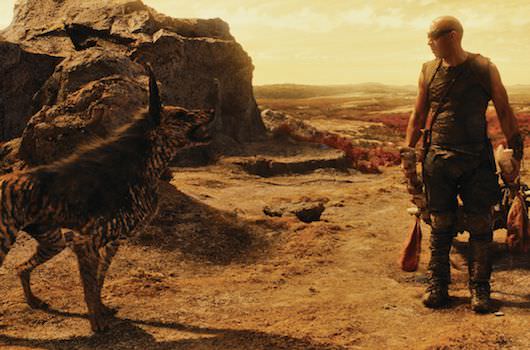 The basic premise behind each installment of writer and director David Twohy’s sci-fi film trilogy—Pitch Black, The Chronicles of Riddick and Riddick—is pretty straightforward. Riddick, played by Vin Diesel, finds himself on a hostile alien planet inhabited by creatures that want to kill him. To add flare to what otherwise could become a tired storyline, Twohy constructs his films around dramatic human storylines and builds them up from a foundation of real-world science.

“In my movies, I start with good science and try to hang on to it until it gets in the way of telling a good story,” Twohy said at a recent “Science in the Cinema” panel hosted by Nautilus magazine at New York’s Museum of Modern Art. Once that solid foundation of fact is in place, in the interest of entertainment he may take the story to new places, or stretch those parameters. “If the odd question only comes up afterwards over beer, then we’re home free as filmmakers,” he said.

For Twohy, finding a cinematic sweet spot between fact and fiction works best. “Some of us start with good science and part ways only if we must,” Twohy says. “But it’s almost always a mistake to emphasize science at the expense of human characters and motivation.”

He learned this lesson the hard way when he screened his 1996 film, The Arrival, with a test audience. The main character, played by Charlie Sheen, is a radio astronomer who picks up on evidence of alien life. In the original cut, Twohy had Sheen diverging on long tangents about radio wave detection and spectral analysis, only to watch his audience members begin to fidget and yawn. “I tell you,” he said, “the science discussions are about the first thing to go.”

Still, he always consults science first. His concern with astronomy fact extends beyond avoiding rookie mistakes, such as creating audible explosions in the vacuum of space. Since he was a boy, he recalls “always looking up,” and harbored plans to become an astronomer well into his teens. He still feeds that interest by keeping up with the latest developments in the research community and following NASA’s galactic news.

So it’s no surprise that real-life discoveries of exoplanets—those outside the boundaries of our own solar system—both intrigue Twohy and inform his cinematic visions. For centuries, scientists assumed these planets were out there, but until 1992 no one had definitely confirmed an exoplanet’s existence. Now, researchers have identified nearly 800 such planets, with another 3,500 hopeful candidates lined up for vetting and likely billions more awaiting discovery. “It’s all fodder for me,” Twohy says.

Directors today can use both their imaginations and the facts of science to concoct alien worlds, said panel moderator Michael Segal, editor-in-chief of Nautilus magazine. “Fiction,” he said, “is taking advantage of exoplanets.”

Twohy’s films are often set on such distant locales, which he crafts with a combination of science and science fiction. Pitch Black, for example, takes place on a desert planet with three suns. Every 22 years, the planet enters an eclipse, sending the otherwise unwaveringly lit rock into total darkness. Some details of Twohy’s planet add not only scientific plausibility but also enhance the place’s ambience. A star’s size, properties and distance from a planet, for example, determines the frequency of light it projects, which can range from blueish to reddish. Recognizing this fact, Twohy’s suns assume different hues, one glaringly red and another a softer blue.

After the lights go out, Vin Diesel’s burly anti-hero Riddick must contend with the planet’s native occupants: hungry nocturnal bat-like predators. (The actor, Twohy adds, is strictly a fantasy fan and has to be “reined in” to some basic scientific parameters when working on the films.) But how do those creatures survive the 22-year intervals between each eclipse? Twohy imagines they assume a cicada-like hibernation below ground, but Harvard astrophysicist and film buff Lisa Kaltenegger has an even better idea. The multiple suns’ fields of gravity vie for control of the hostile planet’s orbit, essentially locking it into place and creating an environment that always includes a half light, half dark situation, and thus favors those nocturnal creatures’ evolution. Additionally, the underground tunneling system depicted in the film would allow the predators to migrate between hospitable dark patches in the case of an eclipse. “I solved it,” Kaltenegger said at the panel. “You can have these cool creatures—not that I want to meet any of them.”

“We should have a job exchange,” Twohy joked. “I go to her work and play with astronomy, and she can deal with Vin Diesel for a day.”

Twohy’s imagined planets, Kaltenegger added, actually do have real-world counterparts. In The Chronicles of Riddick, Twohy creates Planet U.V., which only features ultraviolet light and exists in extremes of either incredible heat or unbearable cold. Similar conditions exist on Mercury, although Kaltenegger pointed out that the planet’s lack of atmosphere creates this situation. If Twohy wanted to adhere strictly to reality, Riddick would have been wearing a clunky astronaut suit equipped with a breathing apparatus throughout the film. “But I understand that it’s not really cool to look at Vin Diesel running when you can’t see anything,” she said.

Occasionally, however, what seems like science fiction may turn into scientific fact as researchers learn more about the universe. Scientists used to question the existence of a binary star systems, but now a dozen or so planets have been found locked into such an arrangement. Whether any of those planets might have an additional sun or may be infested with hostile alien nightwalkers, however, still remains firmly in the realm of science fiction and future research. “Ultimately, I believe the universe is stranger and more bizarre than anything we can imagine,” Twohy said.

Featured image: Vin Diesel reprises his role as the antihero Riddick–a dangerous, escaped convict wanted by every bounty hunter in the known galaxy–in Riddick, the latest chapter of the groundbreaking saga that began with the hit sci-fi film Pitch Black. Courtesy Universal Pictures