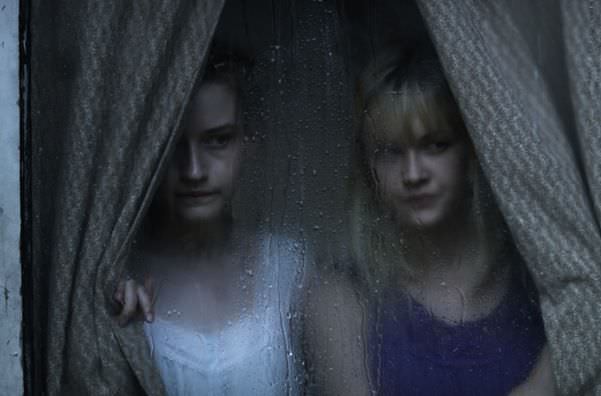 Chatting With Director Jim Mickle of We Are What We Are

For a key scene in the new drama We Are What We Are (opened Sept. 27), director/co-writer/editor Jim Mickle found himself up a creek holding a pile of bones.

“At some point, I think it was myself, it was a bunch of PAs, it was the prop gang, it was the art department, everyone had a stack of bones and they were just upcreek, just throwing it into the water,” Mickle told The Credits of the scene when the sins of the father, Frank Parker (Bill Sage), are washed downriver after days of relentless rain.

“It was the one day that it was going to actually rain, because it never rained on that freaking movie,” Mickle said of the half day they spent filming the scene. “Everyone freaked out because Bill was in the water, and it was lightning, and it was like, finally we actually have a storm in this movie, we can get real rain, and everyone’s telling me we’ve got to get out of the water.”

The rain is key to Mickle’s movie, a remake of Mexican director Jorge Michel Grau’s 2010 Somos lo que hay (We Are What We Are), but Mickle calls the gloomy look of the movie “painstakingly hand made.”

“You’d wake up and you’d look at the call sheet and every scene would be rain, rain, rain, torrential rain, rain, flood, and you’d get up and open [the window shades] and it’d be just blue sky, puffy white clouds,” Mickle said.

The wildness of nature is one of the fresh elements Mickle and frequent co-writer Nick Damici (who also plays Sheriff Meeks) brought to the remake. The original was set in the city, and Mickle and Damici considered a variety of urban settings–New Orleans, Detroit, Philadelphia–before settling on something rural.

“We both said, what’s the area that we feel really home at and know really well, that was upstate New York,” Mickle said. “That was what made the movie start to fall together, was [we decided] we’re not going to look at these sort of outward ways to make these things work; we’re going to make a personal film and make something that we know and can speak on.”

That’s what made Mickle, initially hesitant about taking a remake, agree to the idea. And by the time the original script was translated, Mickle and Damici already had a first draft reflecting the choice to flip the gender of most of the central characters. That was another decision to “write what you know,” since Mickle felt more familiar with a family where the single-parent is the dad.

“I remember a specific moment where my dad was trying to make peanut butter and jelly sandwiches and wasn’t used to it. And it was this whole thing of seeing a guy trying to do the best that he could and being upset that he didn’t think he was making it right,” Mickle remembered. “I thought if we could sort of fill this movie with these moments, and even have it be within this horror setting, it’s going to feel real.”

Did we mention: We Are What We Are is a drama about a close-knit family of cannibals.

“What was cool was being able to say I’m not going to make a horror film,” said Mickle, who looked outside the horror genre for inspiration, as he had in previous films Stake Land and Mulberry Street. He also explored his interest in religion–heavily influenced by Jon Krakauer’s 2004 book “Under the Banner of Heaven: A Story of Violent Faith”–as one of the movie’s themes.

“[Cannibalism is] such a powerful word, such a powerful idea, you can sort of float that out there and spend the rest of your movie making a really dark family drama,” he continued. “It isn’t really about eating people, it’s more about the traditions and the beliefs.”

Mickle helped his actors achieve that dark mood on set by playing rough cuts of the score when shooting some dialogue-free scenes. He had the foresight to send the first draft of the script to his composer, Jeff Grace, before even casting.

Mickle also encouraged the cast to bond when he brought them on location about four days before shooting, particularly over the dinner table.

Judging by the resulting movie, which earned positive reviews at the Cannes and Sundance Film Festivals this year, it seems a cast that eats together … convincingly eats each other on screen.