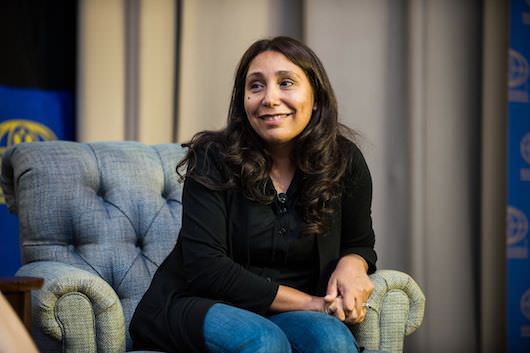 An Evening With Haifaa Al Mansour, Writer/Director of the Historic Wadjda

There have been many objects of fascination that have been a crucial part of great films. Think of the Red Ryder BB gun in A Christmas Story, or, to use an even more famous example, Rosebud from Citizen Kane. In Haifaa Al Mansour’s fantastic, ground-breaking Wadjda (the first feature length film to be shot entirely in the Kingdom), the object is a beautiful green bicycle. This is what the titular star of the film, 10-year old Wadjda, desperately wants so that she can beat her friend, Abdullah, a neighborhood boy she really shouldn’t be playing with, in a bike race. Wadjda’s mother, sensibly, fears that buying the bicycle would be bad news for her daughter in a society that deems such items as dangerous to a girl’s virtue, so she refuses it. Besides, her mother has her own issues (she is attempting to convince her husband not to take a second wife) and is therefore not as attentive to Wadjda’s desire. But Wadjda is not so easily daunted by obstacles, so she sets about running various schemes at school in order to raise the money. When she hears of a cash prize at her school for a Koran recitation competition, Wadjda throws herself into study in order to achieve her dream.

This wonderful premise is the heart of Al Mansour’s film. “I have come from a small town in Saudi Arabia where there are many girls like Wadjda who have big dreams, strong characters and so much potential,” Al Mansour said in a press release. “These girls can, and will, reshape and redefine our nation.” Al Mansour herself has already begun that process, and this film’s existence alone would merit plaudits and respect—but it’s more than just a historical achievement, it’s a great film to boot.

The MPAA and Sony Pictures Classics set up an evening with the filmmaker, moderated by Elise Labott, Foreign Affairs Reporter for CNN, to screen Al Mansour’s film, discuss her journey, and talk about what the future might look like for Saudis. Her film is a testament to the power of the medium to reach people all over the world, and shed light on cultures many know little about. We’ve put together this snippet of that evening, and look forward to following Al Mansour’s inspiring career.