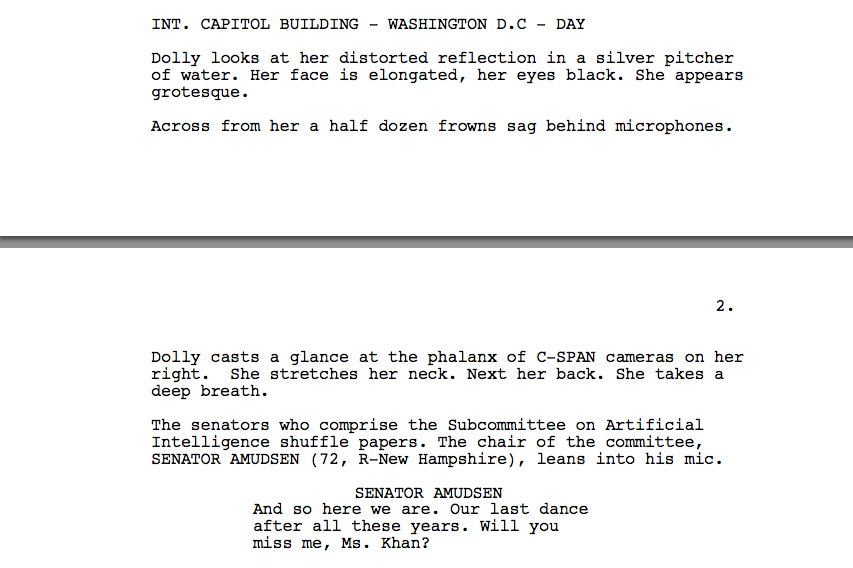 How hard is it to make it as a screenwriter in Hollywood? Watch the Coen brothers Barton Fink or Billy Wilder’s Sunset Boulevard or last year’s Seven Psychopaths for a clue. All three films focus on a struggling screenwriter. All three, while wildly different and wonderfully perverse (in their own specific ways) get at the beating black heart of the unknown screenwriter’s soul—that your soul is for sale, so long as you can get your script made.

Or go to your local bookstore (or Amazon, sigh, which is more likely where you’ll head) and pause at the section for screenwriting books. The variety, the sheer volume, is stunning. The volume suggests we’re a country of frustrated screenwriters. If you want to learn how to, oh I don’t know, build a boat, you’ll find a few stray volumes here and there. If you want to know how to structure a screenplay, write dialogue, create a compelling inciting incident, and establish a satisfying three-act arc, there are roughly 34,928 books to choose from.

What you might not know, however, is that the very people you want to sell your script to (those of you who aren’t interested in making an independent film) have in-house writer’s programs that offer you a chance to get invaluable instruction and insight.

Here’s a rundown of what’s available to you future screenwriting legends of Hollywood, in both film and TV:

Disney/ABC Writing Fellowship:  This partnership with the Writers Guild of America West was created in 1990, and is one of the finest television writer programs around. The submission period for the writing program opens in the spring (check their homepage for specific dates) where you’ll find the application guidelines. You’ll need a spec script of a broadcast or cable network series that’s in production during this current television season (just think about how much fun you could have writing a True Blood script where literally no mythical creature or insane subplot is out of bounds). This program, like all legitimate television writing fellowships, requires that your spec script captures the series tone, no small feat. Which means you must read scripts from the show you’re writing to get a feel for it. If you make it into the program, you’re paid a weekly salary of roughly $960 and are exposed to executives, producers and literary representatives, as well as getting to work one-on-one with current programming or development executives to create spec scripts for the current broadcast season. Eight fellows are chosen out of roughly 2,000 applicants.  Seven out of the eight fellows from a recent fellowship were staffed on TV shows. We interviewed one past fellowship member recently, George Mastras, who has gone on to write and direct for a show you may have heard of—Breaking Bad.

NBC/Universal Writers on the Verge Program: This program at Universal Pictures’ stated claim is to “identify and cultivate new and unique voices with a passion for storytelling” looking for “talented screenwriters who have the potential to thrive, but don’t have the access or visibility within the industry.” Writers who are chosen get to work exclusively with the studio over the course of a year, working on current Universal projects, pitching original story ideas, attending workshops, receiving mentoring, and interacting with top literary agents. This is a new program, which will begin accepting applications this September 3. Applicants will have to submit a screenplay as well as other material.

Fox Writers Intensive: This intensive program (really, is there any other kind of writing program?) is geared for the more experienced writer. Applicants should either be previously staffed, produced or published writers. FWI is open only to referred writers, meaning you’ll only get to apply if you’re nominated, at which point you’ll receive a secure login and password from FWI with submission details (the list of nominating organizations are included in the above link). While the application process for FWI is clearly much tougher than the above-mentioned programs, the opportunities afforded to FWI finalists are considerable. If you manage to get in, you can walk away with a purchase and development deal from Fox Broadcasting Company, a chance to apply to the Fox Writers Studio, an opportunity to pitch an original script to HarperCollins, as well as staffing meetings for current Fox entertainment series and first-look agreements to option their original script.

Warner Bros. Television Writers’ Workshop: This program has been going on for more than 30 years, and includes an elite list of alumni like Terrance Winter (The Sopranos, Boardwalk Empire), with recent alumni now writing for Warner Bros. Television series such as the massively popular The Big Bang Theory and The Mentalist. The WB Writer’s Workshop selects 10 applicants out of roughly 2,000 submissions, who spend from October to March honing their skills via the program’s three key components; lectures, a simulated writer’s room, and staffing. Submission requirements include (as always) a writing sample, which you upload online, and that is based on a primetime network or cable series in its second season or more, and that’s listed in their drop-down menu. A helpful tip from WB on comedy spec scripts: “If you choose to write a comedy, stay away from dramadies like Nurse Jackie and Glee. Comedy writers will be judged on the number of jokes within their script.“