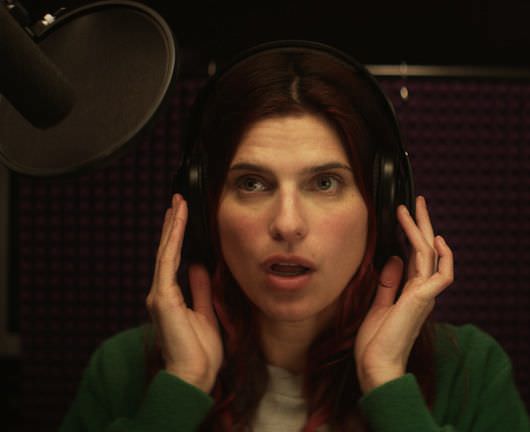 Writer/Director/Producer/Star Lake Bell on In a World…

In the dramedy 'In a World…', out August 9, writer/director/producer/star Lake Bell visits the voiceover industry as a newbie competing for the same gig as her industry-veteran father. Here, Bell, who has delivered memorable acting turns in such movies as No Strings Attached and It’s Complicated, talks about writing the script for her feature-film directorial debut, why she loves trailers, and what “voice” annoys her most.

The Credits: What insight can you offer about voices and accents?

Bell: Well, I do tons of accents. In drama school, we learned about the musculature and resonance of many different sounds and accents, and about paying attention to our own voices and how we put them out there.

There are certain communities that have different affectations, whether it’s the dreaded sexy baby voice that I reference in my movie, or the tough guy voice, or the intellectual voice where you lower your voice to sound more important or serious.

When I first came out to LA, I auditioned quite a bit trying to get into the voiceover business, but it was hard.

Can it be as cutthroat as it appears in your movie?

Oh, yeah. There’s just no room for newbies, and you have to really earn your way.

Had you ever met the late Don LaFontaine, the premier voiceover artist?

No, I never had the opportunity. But his estate has been wonderful and generous in allowing me to include him in my story.

I did get help from Melissa Disney, who’s a famous voiceover artist. She was incredible to me, and a wealth of knowledge.

You’ve mentioned that you’re a trailer junkie. What impact did this have on your movie and what do you think makes for a good trailer?

I think a good trailer is succinct and poppy, so it needs to have something that grabs you. I just love what a trailer promises. It was interesting to figure a trailer for In a World…, because even though it’s about the interrelationships of a family and the people around them, it’s based around the voiceover and movie trailer world. In the end, I just wanted to make a classic trailer and I think we accomplished this.

How long did it take you to write the script and how do you approach the writing process?

The writing probably took about 1-1/2 years of a four-year production from start to finish. For me, the process starts with writing about what I want to write about without judgment. Then once a draft is done, I kind of graduate to being more structured and rigid about requirements in the script, and progressively I start to tailor it more and more. I don’t show anyone a draft until I’m really proud of it. For In a World…, that was around No. 27.

To write, I set up a retreat in my home. I put on the calendar a three-to four-day segment of time and let everyone know I’m, “quote,” going on a writer’s retreat, even though I’m in my house. I clean my house to its utmost beauty and organization, fill my refrigerator with good snacks and healthy drinks, and then I don’t write until the retreat starts.

Did you stick to the script or allow improvisation while filming?

We ended up sticking to the script with little sprinklings of improvised moments to pepper the story and make it, you know, fun and real. In a lot of the comedies I grew up with and loved and admired, there was always a constant flow of conversation, the way life is, where you talk on top of each other. I hired hilarious, funny, somewhat improvised-based comedians to be in the movie, because I thought they’d elevate it so much. And sometimes “little gifts” did happen and we went with them.

By the way, congratulations on winning the Waldo Salt Screenwriting Award at Sundance.

Thanks! I also was lucky enough to get picked up at Sundance.

After helming a project, is it hard for you to step back and just be an actor? Or is that a welcome and necessary respite?

For me, it’s an utter respite. In my head, of course, I’m naturally thinking at moments ‘Oh, how would I do this?’ if something’s going poorly. But I love my job as an actor, which is to just help the director realize his or her vision, and I’ve always respected that tremendously. Acting is why I’ve had the opportunity to learn about filmmaking on every job I’ve ever done. I can never look that gift horse in the mouth.