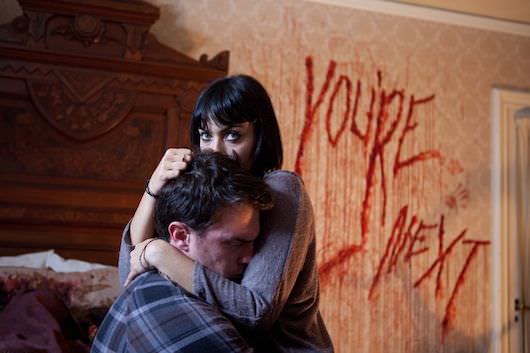 Movie calendars no longer really mean what they used to. Yes, movies with Academy Award aspirations do get back loaded and released during the fall and early winter. Yes, summer is still blockbuster season, a fact as immutable as gravity or Woody Allen releasing a movie a year. Yet assuming you can guess the relative quality of a film based on the date it was released is getting harder and harder to predict.

Take late August, for example. Not a notorious time for a wide selection of great films to see —yet there are a surprising number of gems rolling into theaters this weekend. That’s not to mention all the good stuff still out there (Blue Jasmine, Lee Daniel’s The Butler, Elysium, oh just check this list).

This is probably the last weekend of summer you can feel good about doing absolutely nothing (assuming you might want to do something over Labor Day weekend). With that in mind, we've put together a little trailer reel of some worthwhile films coming into theaters this weekend, as well as a little kicker at the end of two TV shows you can also add to your list.

Go forth…and sit quietly in the dark (or on your couch).

Edgar Wright finishes up his ‘Three Flavors Cornetto Trilogy’ in style with this hilarious, genuinely exciting apocalyptic romp. Old buddies on a pub crawl that’s interrupted by a robot invasion? Starring Simon Pegg (who once again co-wrote the script with Wright), Nick Frost and Martin Freeman (Bilbo Baggins, no less)? With Rosamund Pike to boot? Yes, please. As we’ve written, we do love our apocalypse movies, and Wright’s delivered one of the most enjoyable films of a summer that’s just about to come to an end, and one of the better apocalyptic movies in a long time. Like he did with Shuan of the Dead, Wright is a master at making a well-trod genre all his own.

Following The Conjuring’s lead, one of the summer’s surprise hits, Adam Wingard’s You’re Next looks plainly terrifying. The reviews are all positive, as it seems Wingard has taken all the elements we expect in a home invasion horror and imbued them with real terror (and wit). The film puts us in the plush estate of the Davison family during the parent’s 35th wedding anniversary where their four kids (and their significant others) gather to wine, dine and celebrate how good they all have it. Cue an arrow through the window meeting an eyeball at the dinner table. Sharni Vinson, playing a girlfriend of one of the Davison kids, is your Jamie Lee Curtis—and all accounts say you genuinely root for this tough, resourceful heroine. The wolf masks are effectively creepy.

Ah, now wasn’t that a nice, refreshing beer-y palate cleanser after You’re Next? Also, here’s some fun synergy for you–Drinking Buddies director Joe Swanberg is a character in You’re Next who almost certainly gets horribly slaughtered! Anyway, Drinking Buddies is a film even hipster-haters and mumblecore refusers can get behind—it’s got a lot of beer, a great cast (Olivia Wilde needs to be in more comedies) and a subject that’s been debated since well before Billy Crystal famously told Meg Ryan in When Harry Met Sally that men and women can’t be friends. (Think we’re still not debating Harry’s line? Ann Friedman of New York Magazine just wrote a piece about how “Harry Had it Wrong.”) Wilde and Jake Johnson’s character Luke are “just friends” in Drinking Buddies, who go away for a weekend together with their respective partners. Confusion, recrimination and beer ensue.

Wong Kar-wai is a legend (as is his fight choreographer on this film, Yuen Woo-Ping), so you’d do a whole lot worse than taking in this epic film about the legendary Kung Fun master, Ip Man, who taught none other than Bruce Lee. Inspired by Man’s life, the film is set during the fall of China’s last dynasty when Man was becoming a master through action, not teaching. Tony Leung, who looks remarkably like the real Ip Man, is electric as the hero. And it needs to be said (most likely again), Ziyi Zhang is one of the greatest action heroes currently working in movies. She's only 34, she steals every scene she's in. You remember her from Crouching Tiger, Hidden Dragon.

First off, yes, this show’s on Wednesday nights, but if you get BBC-A (you probably do) you can catch up with the show via On Demand. Now, why should you? This British export, which revolves around a boy’s murder that shatters the idyll of a cozy, seaside English village, takes these common crime drama tropes and infuses them with genuine mood, emotion and stellar performances. The show has gotten rave reviews from everyone (the Los Angeles Times, The New Yorker, etc)—and when a crime drama is good, there’s pretty much no genre on TV that can beat it. Don’t believe us (or the LAT, or The New Yorker)? Broadchuch was the most Tweeted TV drama in British history, and sparked surges in the nation’s power grid during each commercial break because that’s when the Brits would race to make their tea—seriously.

Drunk History’s repeats air on Sundays, and if you’ve never seen Derek Waters’ hilarious series, in which a talented (and hammered) comedian narrates a bizarre (but real) historic event that they’re very passionate (and oftentimes very, very wrong) about, then start doing so post haste.

Finally, do we really need to tell you to watch Breaking Bad?