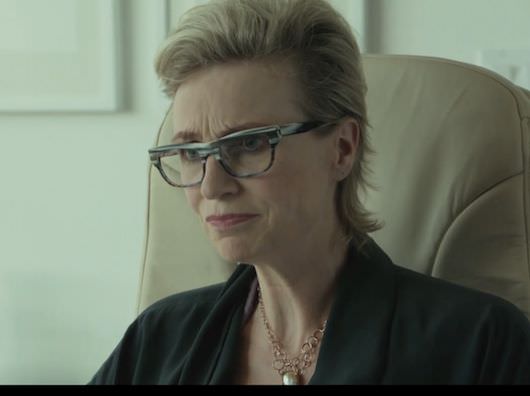 Talking to Jane Lynch About her new Film Afternoon Delight

Since premiering at this year’s Sundance Film Festival, writer-director Jill Soloway’s provocative comedy about sex, marriage and finding oneself, Afternoon Delight, has garnered praise (Soloway won best director at this year's Sundance Film Festival)  — with many singling out Jane Lynch’s performance as one of the fest’s best. Afternoon Delight follows Rachel (Kathryn Hahn), a hip, Silver Lake, California, mom with a lackluster sex life, who takes in a homeless stripper (Juno Temple) to spice things up. Lynch plays Lenore, Hahn’s self-centered therapist, who talks more about her perfect partner, Portia, and her recently diagnosed perimenopausal low blood sugar, than Rachel’s problems at home.

With the film’s wide release set for August 30, we talked to Lynch about her Chicago roots, the origins of Lenore, and collaborating with her longtime friend.

The Credits: You’ve know Jill Soloway [who was a writer and co-executive producer on Six Feet Under and performed similar duties on The United States of Tara and How to Make it in America] for many years, back from your Chicago days. How did you meet?

Lynch: We met doing The Real Live Brady Bunch [Lynch played Carol Brady]. Her sister, Faith, and I met first, because we were in the same touring company in Second City [Chicago’s theatre and school of improvisation].

There weren’t a lot of women in Second City at the time, right?

Well, there were always two women and five men in every group, and now it’s much more equitable (chuckles). It’s three and three.

So how did you and Jill know you wanted to work together? Did you instantly hit it off?

Yeah, we did. Doing The Real Live Brady Bunch was one of those obscure things that cracks you up and at the same time moves you, and we had the same experience about that show. And we found a bunch other like-minded people, and it turned into this kind of cultish hit. And then we went on to do a bunch of other things. We were doing little videos together before there was an Internet.

Which brings us to your character, Lenore. You created her years ago, right?

Yes, we started working on this character, and her name in Afternoon Delight is Lenore, but I did a version of her for years, and her name was Sandra Ragsdale. So she’s kind of a version of Sandra and Jill’s actual therapist. In fact, we used Jill’s therapist’s actual chair, and we used her little footrest that exercises her foot.

So pre-Internet, were you doing this character just to crack each other up?

Oh my god, yeah. That’s the only reason. At that time I was way into like The Chalice and The Blade and seriously looking at this stuff. I was way into the myths and goddess stories and I just loved that stuff, and of course, every time I find something I love, I always make fun of it as well, and so does Jill. Jill’s a real feminist, and we always found something funny about the things we were passionate about.

Did you ever think Lenore would become a movie character?

I don’t know that I had that ambition for it, but it was always something that was fun and helped us express ourselves. So it was a real delight when she asked me to do this. She said, “She’s kind of like Sandra and my therapist,” and I was like, “I’m in!”

How would you describe Jill as a writer-director?

She’s a complete creative. And in very feminine way. She’s allowing, and accepting, and she surrendered.

How much of your performance was improvised?

We were pretty loyal to the script. I think we went off a little bit once in awhile, and it was a very organic process. I did sit and learn lines, but Jill was very open.

Lenore is a pretty terrible therapist. So why does Rachel keep going to her?

Rachel's one of those people who takes care of people, and she avoids conflict. To leave would be too much conflict. Plus, I think she does think she's gonna find an answer, or maybe have a breakthrough, and she doesn't want to hurt anyone’s feelings.

It is. And Rachel is so identifiable and so particular, and I think the situation she’s in will speak to a lot of people. But it is kind of revolutionary–a woman looking to find herself and putting her relationship with her child and her husband at risk.

You must be getting scripts by the pound at this point. How do you decide what project to do?

It’s all about who I’m working with. I didn’t even read the script when Jill mentioned this to me. It was a no-brainer.