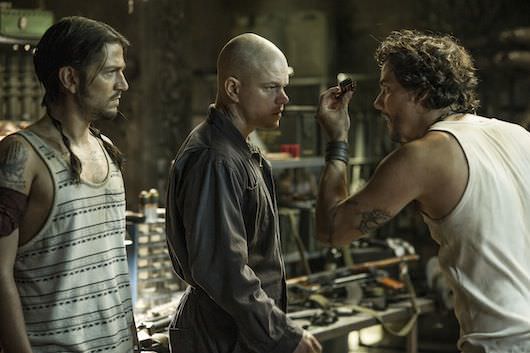 The idea of putting all of Earth's richest people in space permanently has its appeal. Some very much would like to go, and a few of us would like to send them there.

Is such a thing possible, though? To build a huge, permanent, self-sustaining home-off-of-home?

Director Neill Blomkamp, the man behind the fantastic aliens-as-refugees film District 9, uses that idea in his new film Elysium (which opens August 9) to explore the relationship between the have-lots and the have-nots.

Opening Aug. 9 in the United States, the movie stars Jodie Foster as the executive charged with defending an immense and luxurious space station, called Elysium, on which Earth's wealthiest live. She embodies Elysium's reason to exist: The riffraff can keep the planet they loused up. The Right Sort will carry on in hermetically sealed splendor above.

Matt Damon plays one of the 99-percenters trapped on the ruined Earth. He needs to get aboard Elysium to save his life. His character becomes the spark between those who would bring the wealthy low, and the rich, who are content within their walled community.

Today, we have two utilitarian space stations (one international and one Chinese), that together can accommodate maybe 10 people at a time. Only the International Space Station is continuously occupied, while the Chinese space station is a work-in-progress.

And yet, in these two examples, we could have the beginnings of our own Elysium.

Almost everyone who has ever earned a berth in space has been a supremely skilled scientist and/or pilot. But beginning in 2001, Russia began occasionally ferrying to the Space Station anyone else who proves he or she can endure launch and landing. And, of course, who can pay for the privilege. For those of us who can't afford a stay in space, we can at least enjoy a suborbital space flight aboard Virgin Galactic…for $25,000 a seat.

Mark Uhran, the retired director of NASA's International Space Station division, is not nearly as cynical about low-Earth orbit space exploration. He sees permanent space stations as part of our urge—or need—to explore. And, perhaps, provide a crucial second home as is the case in Elysium

Uhran’s former title doesn't tell the whole story. He worked on the Space Station project for 28 years. During that period were times when NASA itself had lost enthusiasm for the project, and Uhran re-energized the effort.

"There has to be a driver to keep us in space stations," he says. "We're not going to build just to build anymore. It's too expensive."

Uhran says, "The driver is our human nature to explore."

It's also human nature to expect too much too soon, not that you would find Uhran indulging in that trait. Asked if someday we might have the kind of massive space station on display in Elysium, he pointed out the obvious—science fiction sometimes predicts science fact.

"Our Space Station is operating very well, and will probably operate for a decade more; maybe longer. That success makes me think, 'What else might we be doing in this millennium?' "

Uhran gets much more specific when talking about the incredible hurdles engineers need to jump in order to put and keep a meaningful number of people in permanent orbit.

For argument's sake, let's say that using the resources of the Earth and the Moon, we could create and assemble the raw materials needed to build a village-sized space station. It would fail as a permanent outpost if it required an endless stream of supply rockets full of air and water, as is needed for today's stations.

"We have to design a closed-loop system," he says, meaning the vessel starts off with a certain amount of water and air, and onboard systems endlessly recycle or create more.

As young spacefarers, we're getting better at this critical step.

"I don't think people realize that on the Space Station right now, we're recycling 75% to 80% of the water up there."

Take a moment to consider what that means—it's virtually certain that most people don't know what it really entails to have a closed-loop system.

Sweat, the vapor in bad breath, used bathing water and, indeed, urine must be cleansed, filtered and purified to become useful again. That water is used for drinking, irrigating, medicine — anything that it's used for on Earth.

Getting to a 100% closed-loop system will be a challenge.

Businesses are stepping in now that governments have done the exploratory work, he points out.

So, at least in the mind of one veteran space administrator, city-state space stations are possible.

The interesting question left over, the one that neither science nor art can answer is, will we build castles or village commons up there?