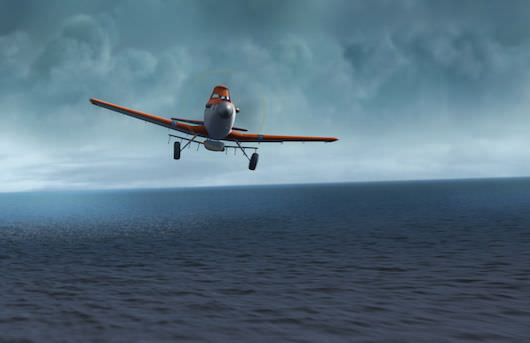 By By Cynthia Momdjian, courtesy of The Walt Disney Company

Close your eyes. Imagine you’re in the air flying, not a cloud in sight. It’s just you and a blue pastel-colored endless sky and then, suddenly, you shift gears and enter a high-speed race with two fighter jets. You’re propeller-to-propeller with your opponents and just as you’re about to gain the lead, you smell… manure?

That’s how Dusty Crophopper, star of Disneytoon Studios’ new animated feature film, Disney’s Planes, spends most of his time. Although he’s a crop duster by day, this plane has got his head in the clouds, fantasizing about becoming a world-famous racer. Eventually his daydreams become reality when Dusty defeats all odds—and his fear of flying above 1,000 feet—to compete in the biggest air race of them all.

Behind every great animated character is…another character, of course. Comedian Dane Cook leads the all-star cast as Dusty alongside the always-hilarious Brad Garrett as Chug, Dusty’s best friend and biggest fan. You can also hear lovable actress Teri Hatcher as Dottie, the whiz forklift and ace mechanic who keeps Dusty’s high-flying aspirations grounded in reality. The list of comedy legends who lend their voices to Disney’s Planes is equally impressive—Cedric the Entertainer, John Cleese, Julia Louis-Dreyfus, Carlos Alazraqui and Sinbad, to name a few.

Inside the cockpit behind this new animated comedy, we find director Klay Hall and his co-pilot, producer Traci Balthazor-Flynn. The two Disneytoon Studios veterans headed Planes’ four-year-long production. Klay was especially excited that John Lasseter, chief creative officer, Disney and Pixar Animation Studios—and Disney’s Planes executive producer—tapped him to tell the Disney’s Planes story. “I’ve always loved airplanes,” Klay says. “My dad was in the Navy and his dad was also a pilot. They flew all their lives and passed that love of aviation to me.”

To bring this passion project to life, Klay and Traci were on a mission to find aviation specialists in the form of stellar screenwriters, pre-visualization specialists and animators for their production team. To put it simply, this crew of talented and creative minds would help the duo create a believable story and characters—a personal mandate from John Lasseter.

And that’s just what art director Ryan Carlson was determined to do. “We did multiple ‘walk arounds’ of each character to make sure we got all of their flaps, ailerons, trim tabs and actuators right,” he explains. “There are hundreds of characters in Disney’s Planes. Each one went through the same process.”

While Ryan and his team of artists were designing the look and feel of the film, screenwriter and 14-year Disney veteran Jeffrey Howard was working with John Lasseter, Disneytoon Studios’ Director of Creative Development Paul Gerard and Klay on getting the plot just right. “If you ever get a chance to sit in a room with John Lasseter for five or six hours to talk about cool story ideas, I highly recommend it,” Jeffrey shares with a laugh. “From our initial meeting, we had most of the basics of what the story was about.”

Aside from the script, design and animation, one of the most important components of the film was, needless to say, the concept of flying. “The way we did flight in this film is unique in the animation process,” flight specialist Jason McKinley reveals. The animator and his counterpart, aerial pre-visualization artist Thomas Leavitt, knew that the characters had to behave like actual planes when they were in the sky. “We placed the cameras in realistic areas to show that each plane was flying at an authentic speed,” Thomas mentions. “By thinking of those details and making sure the space is realistic, we knew that the flight would look real.”

Above all, collaboration was key. Whether it was head of story Dan Abraham and story artist Art Hernandez’s hundreds of storyboards or animator Sheryl Sackett’s innovative use of time-honored Disney animation techniques that helped drive production, each facet of the animation process required teamwork.

As audiences head to theaters to see Disney’s Planes, Klay hopes that everyone can see the fruits of his team’s labor on the big screen. “The great thing about animation is that it’s so collaborative,” he says with a smile. “Everyone works together to make a great product.”