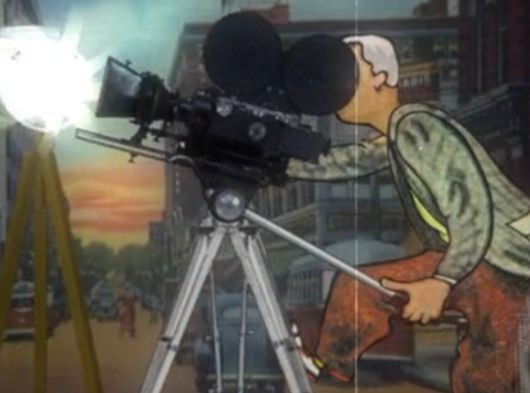 The Vimeo Video School is committed to helping budding filmmakers learn the tricks (and most importantly, techniques) of the trade through their series of lessons, tutorials, and advice. The Vimeo staff create the videos, as well as pulls tutorials, Q&As and films from the larger Vimeo community into their curriculum. They’re not only informative and fun, they’re also, blessedly, free.

A lot of the filmmakers we’ve spoken to over the past year said more or less the same thing at some point in the conversation—it’s never been easier to make your own film. You can find every possible thing you might need to know in books like “The Filmmaker’s Handbook: A Comprehensive Guide for the Digital Age” that will give you in-depth detail on the entire process. You can find inspiration from people who have done it (on the cheap, no less), in titles like, “Rebel Without a Crew: Or How a 23-Year Old Filmmaker With $7,000 Became a Hollywood Player,” by Robert Rodriguez. And then with the glut of DIY lessons online available in places like Vimeo (in everything from editing to computer graphics to lighting), and the relatively inexpensive camera equipment (you can shoot a movie on a Canon 5D, which you can buy used on Amazon for under $600), you're currently living in an age of unprecedented access to filmmaking knowledge and equipment.

While it will always be extremely hard to sell a script or get your movie financed by a major studio, one of the best ways to get yourself noticed is to go out there and make your own film. Nothing kick-starts a career like a tangible piece of work to show people.

Many of the greats started just this way, on low-budget short films. Earlier this year, The Week looked at 12 short films, ranging from the quirky to the bizarre to sublime. What these projects all have in common is they were the work of some of today's most influential directors, including Quentin Tarantino, Christopher Nolan, Guillermo del Toro, Martin Scorsese and Wes Anderson.

Vimeo’s Video School is a great way to get acquainted with the technology and techniques required of any filmmaker. They cover sound, software, shooting, lighting, gear, editing, DSLR cameras, DIY filmmaking and behind the scenes.

One of the snappiest videos is also one the most crucial—who, exactly, is on a film crew? Vimeo staffer Mark writes: Making a video can be a one person production but the more elaborate your ideas get, the more likely you'll need a crew to execute your vision. In this video, we give you a rundown of the basics of how all the work is divided up on a basic crew.

Another fun (and instructional) element of the Vimeo Video School is their weekend challenge. Whether they’re asking you to illustrate a story, capture the essence of temperature on film, or convey a color, part of the charm is in how they embed useful lessons into fun assignments that hone your chops.

The Video School Q&A’s with filmmakers are instructive and inspiring Like this piece on Kyle Ruddick and Brandon Litman about their film One Day on Earth, a documentary that captured the same 24-hour period throughout every country in the world.

Vimeo’s Video School gets into all the nitty-gritty details you’ll need if you’re serious about making a film. Staffer Riley Hooper uploaded this nifty video series on dynamic range, which refers to the range a camera can successfully capture the lightest and darkest areas of an image without losing detail.

Or this video about white balance, which is the process of calibrating your camera to show colors accurately under varying light conditions.

You could spend hours and hours exploring all the videos available, from learning how to shoot video underwater for less than $19 to a helpful guide to how to buy your first camera.

The only thing Vimeo’s Video School won’t do is shoot your movie for you. That part’s up to you.