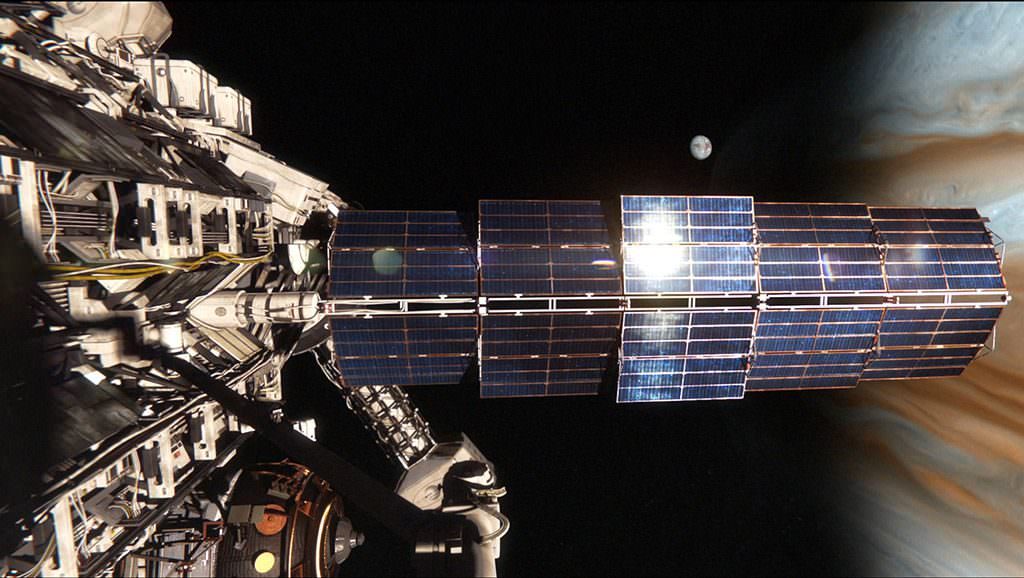 In a way, outer space is like a vast movie screen–we project our hopes, our dreams, and our worst fears onto it. A lesser species might stare into the glittering stars and see randomness—we have been looking up at the night sky for millennia and have seen a near endless array of characters; lions, bulls, twins, a sea monster, a chained princess, a centaur–gods.

It’s no wonder, then, that space has been the setting for some of Hollywood’s most iconic movies—Stanley Kubrick’s 2001: A Space Odyssey, Ridley Scott’s Alien (and James Cameron’s sequel, Aliens), and the entire Star Wars saga to name a few.

Those above-mentioned movies, and countless others, have included some kind of supernatural force. Whether benevolent or malicious, space movies often use a powerful inhuman energy or being as a narrative fulcrum on which the rest of the movie turns. Luke had to master the Force, Ripley had to kill the monster–there are plenty of examples of movies set in space in which our dreams (say, that we're telekinetic) and our fears (there's a monster in the dark who wants to kill us) are played out against the greatest backdrop of all—the cosmos.

Yet, almost as often, screenwriters have relied on the more mundane, but no less deadly, aspects of space exploration to base their movies on. This makes sense considering you don't need a malevolent alien or totalitarian Galactic Empire to die in space. You just need a technical glitch or the tiniest little fissure in a tube.

There is no place on earth, literally, in which the littlest things can kill you as quickly. The margins for error in space are smaller, and the potential for disaster swifter, than they are on top of a mountain, in the middle of the ocean or in the deepest jungle.

Take, for example, today's release, Europa Report. This film, directed by Sebastián Cordero and staring Sharlto Copley (of Distric 9 fame), finds it's space shuttle crew exploring Jupiter's Europa moon. Although they've ventured deep into space, and the film does indeed have some kind of creature in hiding beneath the ice of the Galilean moon, it's the more common (but still terrifying) realities of a technical failure and radiation poisoning that act as the inciting incident in the film.

Radiation is a major problem for real astronauts. We are mostly protected from radiation while on Earth, thanks to the magnetic field that’s created by Earth’s liquid iron core. This field extends well out into space, and blocks 99.9 percent of the harmful radiation speeding towards us. But once in space, all bets are off. As this fantastic infographic from Space.com illustrates, radiation from the sun and other sources in the galaxy (in the form of subatomic particles) tear through our DNA molecules, splitting or deforming them. This molecular assault can cause cancer.

Radiation exposure can be acute–a high dose blasting astronauts in a short period of time. This is what happens in Europa Report, as well in the most severe form imaginable in Danny Boyle's fantastic 2007 film Sunshine. Radiation can also be meted out in chronic doses, which occurs slowly, over time, and was certainly a concern of Russian cosmonaut Valery Polyakov, who spent a record 438 consecutive days aboard the Mir space station, from January 1994 to March 1995. Chronic radiation is also a major hurdle for one of NASA's most ambitious (and public) dreams–to send astronauts to Mars.

If you're looking for another current space film that takes a real life threat to astronauts and mines it for cinematic gold, you've got Alfonso Cuaron’s upcoming Gravity. The wholly plausible disaster scenario that sets up the entire film arises from, for lack of a better term, space junk. Gravity’s premise is a simple one—debris from a satellite crashes into the space shuttle Explorer, essentially destroying it and stranding two astronauts (George Clooney and Sandra Bullock) in space with a limited air supply (another classic trope we'll discuss shortly).

How likely is this scenario?

On April 5 in 2011, a piece of space junk from a Chinese anti-satellite test flew very close to the International Space Station, forcing the outpost’s crew to take shelter in a Russian lifeboat (they’re called that in space, too) as a safety precaution. The Chinese space junk got within three miles of the crew, who had to close hatches between modules of the station’s U.S. segment and hunker down in the Russian Soyuz TMA-20 spacecraft, which can double as a lifeboat in case the debris actually hit the space station and forced the crew to flee.

What about non-manmade cosmic space junk, like, say, an asteroid? NASA has recently announced that they’re initiating a grand challenge focused on finding “asteroids that might be a threat to our planet,” as Deputy Administrator Lori Garver said in a press release.

You see where this one is going, don’t you? Michael Bay’s 1998 film Armageddon was about a group of deep-core drillers who were sent by NASA to stop a gigantic asteroid from destroying Earth. Spoiler alert–they succeeded, but it required the death of John McClane (we mean Bruce Willis.)

But a massive killer asteroid is small potatoes compared to a rogue planet. In November of 2012 astronomers found (for the first time) a homeless planet (to use reporter Mike Keller’s phrase) wandering through space, unhinged from any gravitational pull from a larger star.

And this was no tiny quasi-planet, like Pluto (poor Pluto). Rather, this exoplanet boringly called CFBDSIR2149 has a mass of 4-7 Jupiters, and a temperature of roughly 752 degrees Fahrenheit. Now this would be quite the piece of space debris to have to contend with—and while there are several space films that have utilized the concept of a hidden or unknown planet being suddenly discovered (Mike Cahill’s 2011 Another Earth is a pleasingly thoughtful and beguiling entry into this tiny genre), there is perhaps no better example of the rogue planet narrative than Lars von Trier’s Melancholia, released the same year as Another Earth, in which two sisters (Kirsten Dunst and Charlotte Gainsbourg) spend their last days together as a huge planet hurtles towards Earth.

Technological problems, however, is really the category that has given filmmakers an endless array of ideas. The most famous example is Apollo 13, which sort of doesn’t count considering it’s based on a true story. The gist of the issue, however, was that three days into Apollo 13’s mission to the moon, a liquid oxygen tank exploded, sending the craft tumbling off course. And then the second tank began leaking. And here we have the single most consistent technological problem throughout the history of our species and our exploration efforts—the dreaded slow leak.

For as long as we’ve been building vessels to carry us places, there have been leaks. You can be sure that the very first dugout canoes leaked, as did the very earliest sailboats constructed in ancient India, Egypt, and Greece. The Phoenicians under sail for Necho II on the Red Sea were no doubt worried about leaks, just as our current crop of astronauts and cosmonauts are.

Take this slow ammonia leak that occurred on the International Space Station just this past May. The leak was in a crucial system that cools the station, and required ground crews to work overtime to try and determine its cause while astronauts had to perform emergency spacewalks to try to diagnose—and fix—the problem.  The slow leak in power channel 2B had been apparent since 2006, but suddenly the problem became serious (as technical issues are wont to do) when the crew saw white flakes drifting near the station, a sign that the ammonia was no longer in the cooling system.

The slow leak has been a narrative device in a number of space films—it’s the perfect ticking clock to ratchet up the tension, right up there with a literal ticking time bomb. Typically this comes in the form of an oxygen leak (we only got 30 minutes of oxygen left!) One of the earliest examples of this in film was John Sturges’ 1969 space film Marooned, in which the crew of an experimental space station is set to return to Earth when a main engine on their spacecraft fails, and they’re ‘marooned’ on the station with only two days of oxygen left. Which brings us back to Gravity, with our astronauts cut off from Earth while their oxygen running out.

Space helmets have caused umpteenth issues in films–usually when characters take them off, forget them, or can't find them. The most famous example of this is when Dr. Dave Bowman (Keir Dullea) forgets his helmet when he goes out to rescue his colleague Dr. Frank Poole (Gary Lockwood) in the pod in 2001. HAL (the sentient computer system that almost all other sentient [and malicious] computer systems and artificially intelligent machines have been based on) won't let Dave or Frank back into the ship. HAL has just murdered the rest of the crew, no less. If HAL won't open the pod bay doors, they'll run out of air (you can tell your iPhone's SIRI to open the pod bay doors, her response is lifted right from the movie).

In Prometheus, Ridley Scott's 2012 prequel to Alien, there's a really questionable (Spoiler Alert!) moment when archaeologist Charlie Holloway (Logan Marshall-Green) willingly removes his helmet on an alien planet when the crew detects some oxygen in the cavern they're exploring. Fine. But the helmet-related moment from this movie that really stands out is (Spoiler Alert!) is when the geologist Fifield (Sean Harris) has his helmet melted by a corrosive fluid sprayed by a disgusting snake-like creature that has just grotesquely murdered the biologist Millburn (Rafe Spall). That acid this snake-like thing spewed is a direct callback to Scott's original Alien—what happens to the now helmet-less Fifield really does have to be seen to be believed.

Looking for a real-world helmet scenario that is sufficiently terrifying? Then try the story about this astronaut who had his helmet begin to fill up with water.

Guess what you can do when your helmet fills up with water? Nothing.

Chris Cassidy and his European colleague Luca Parmitano were out on a leisurely spacewalk on July 16 of this year when they both had to rush back onto the International Space Station when water began filling Parmitano's helmet, obscuring his vision and hearing.  "He had water filled up in his ear cups, and it started to creep into his eyes and covered his nose," Cassidy told Space.com.

Although there are plenty more great space helmet-related movie scenes, we have to admit there's a movie out there with a direct correlation to the above disaster scenario in which an explorer's helmet fills up with water—only it's not set in space but that other great, unexplored frontier—the bottom of the sea. James Cameron's The Abyss.