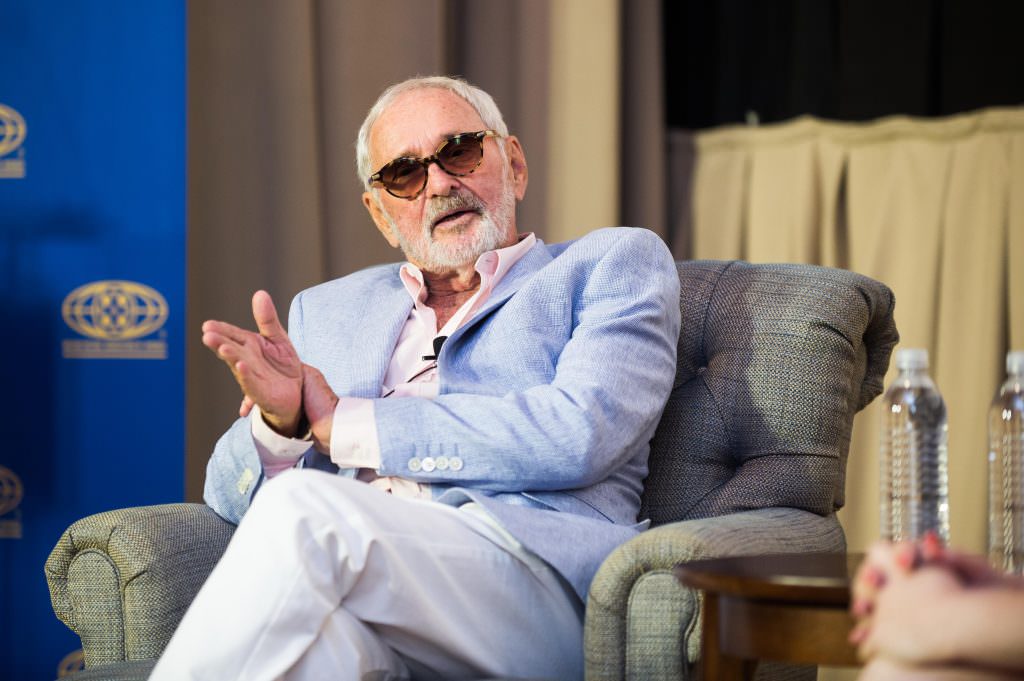 Lauded filmmaker Norman Jewison may be as entertaining a storyteller in person as he is through film. Rocking New Balance sneakers, sunglasses and youthful exuberance at a July 22 event at the MPAA in Washington, D.C., the 87-year-old filmmaker regaled a delighted audience with tales from his more than four decades of historic success in the industry.

Jewison boasts a repertoire of films that have amassed a remarkable total of 46 Oscar nominations and 12 Oscar Awards. His numerous classic titles include, to name just a few, In the Heat of the Night, The Thomas Crown Affair, Fiddler on the Roof, Jesus Christ Superstar, and Moonstruck. Jewison’s accomplishments have led him to many accolades over the years, notably the prestigious Irving Thalberg Award in 1999 and the Directors Guild of America’s Lifetime Achievement Award in 2010. The Canadian native is also the founder of the Canadian Film Centre, a training school for top aspirants to careers in film, television, music and other digital media.

Appearing at the latest installment of the MPAA’s “Evening With” series, the award-winning director/producer spoke about the social commentary many of his films offer on American political issues from McCarthyism to the civil rights movement. Jewison says he was first confronted with the reality of racial segregation in the U.S. when, after traveling here at the age of 18, he was chastised for sitting among black riders in the back of a segregated bus.

“All those news reels I looked at when I was home, seeing so many black soldiers going to fight for their country and probably giving their lives, and then when they came home they had to sit in the back of the bus,” Jewison said. “That was the first time I remember that I really felt I was in a segregated society … and it’s been something that stayed with me all those years.”

The incident contributed to Jewison’s decision to make movies years later like A Soldier’s Story and In the Heat of the Night, a murder mystery that chronicles the tensions faced by a black police officer from Philadelphia who becomes tangled in a murder investigation in a small, racially hostile town in Mississippi. The film contains no overt violence except a single scene with “a slap heard around the world,” as Jewison describes it.

“I think, maybe, it was the first time in an American film where a black man slapped a white man back. And that was an important moment in that film,” he said.

While producing race-conscious pictures at the height of the civil rights movement, Jewison recalls receiving encouragement from a variety of influential sources, from Ray Charles to Robert F. Kennedy. In one unforgettable exchange with RFK in 1965 — a pivotal year for the movement — Jewison said he described the plot of In the Heat of the Night to the famously anti-segregationist senator.

“This could be a very important film, Norman,” Kennedy told Jewison. Two years later, he personally presented Jewison the Best Picture title for In the Heat of the Night at the 1967 New York Film Critics Circle Awards.

Jewison, whose last movie, The Statement, came out in 2003 — exactly 40 years after the release of his first picture — acknowledges the dramatic evolution of cinematography over the past decade with humor and a touch of resistance. He said the switch from film to digital in the movie industry came as a quite a “shock.”

Cutting and splicing film “was always the way we made movies … and all of a sudden it’s gone,” Jewison said. “It’s like I went to sleep and woke up, and I’m in this different world. And I don’t know how to handle it!”

One aspect of movies he hopes will not be lost in the shuffle is the ability to convey a meaningful message to the audience. For Jewison, filmmaking is well worth the time and effort because it provides an opportunity to convey “something I really want to say.”

“President [John F.] Kennedy, in 1963, said a remarkable thing,” Jewison said. “He said: ‘Art is not a form of propaganda. It’s a form of truth.’ And I never forgot that. I believe that artists are always trying to deal with the truth.”