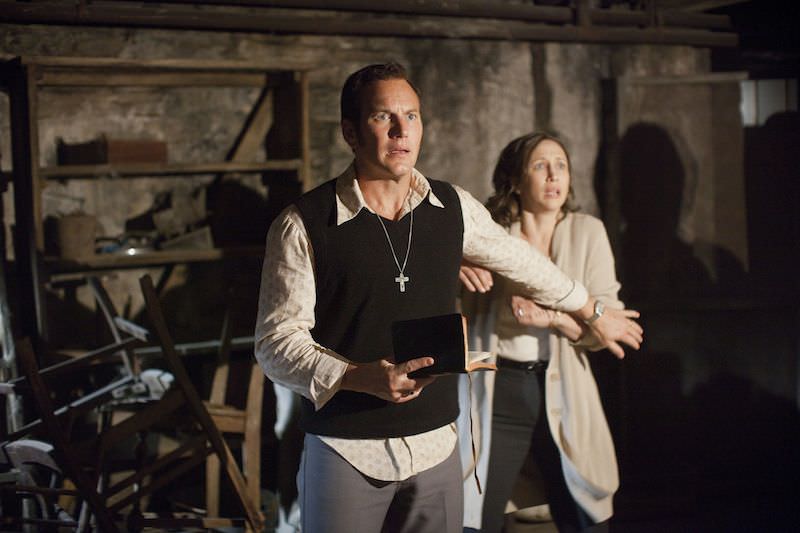 The Conjuring Joins The Ranks of Iconic Haunted House Horrors 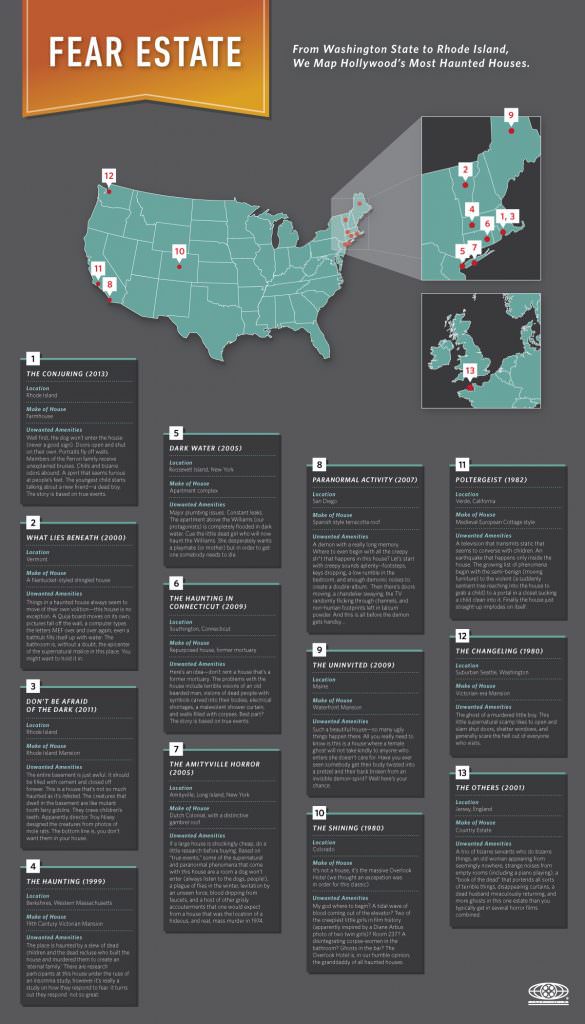 In honor of today’s highly anticipated premiere of The Conjuring, we take a look at the ‘haunted house horror’ genre of film and bestow the Warner Bros. flick an official place among creepy cinema classics.

Admit it: you have distinctly crossed a house or two that you will never ever set foot in. Maybe it was an old boarded up rambler in your childhood neighborhood, a friend’s drafty seaside Victorian, or even a regular-looking one-level with a chilling, storied past. Or maybe it just looked a little too much like the kind of house that harbors a maniac a la Jack Nicholson in The Shining or like that house in Poltergeist (you know, one just begging for a cult leader on the verge of death to ring its doorbell).

We might go to great lengths to avoid these brooding homesteads – and let’s face it, there’s one in nearly every neighborhood around the world – but would we have as much to fear without iconic horror film narratives to remind us of the scares that potentially lie within?

There’s Amityville Horror, The Haunting in Connecticut and even the sensational hit Paranormal Activity. Creaking floorboards, swinging doors, a gruesome plot (the facts of which may be pulled straight from real-world headlines), enough jump cuts to give you whiplash, and an expert exorcism, séance, or all-out demolition  – these are tropes de rigueur for the typical haunted house flick.

But when did these familiar, and yet still wonderfully strange and eerie narrative conventions, first emerge?

The haunted house horror is a bona fide movie genre, and it’s one that dates all the way back to the 1927 film The Cat and the Canary. That silent black and white film set the course for the ‘old dark house’ pattern of films that horror fans flock to on the regular.

The plot of The Cat and the Canary navigates around a woman who inherits a fortune from her uncle and is subsequently scared witless when she moves into his haunted estate. The twist, of course, is whether the house itself is haunted or her greedy family is simply playing tricks on her to get a piece of her inheritance.

A tale of fear, greed, and psychological drama, the film was one of the first to set the course for dark atmospheric horrors set in an eerie haunted house. Though it was by no means the first haunted house to appear in a horror film ever, it certainly set the mold for the genre and notably influenced classics like The Last Warning and House on Haunted Hill.

Distributed by Universal, the film is considered – to this very day – to be one of the studio’s foundational classic horror flicks.  (And that’s no humdrum aside: Universal is the same outfit to gift the world legendary horror films like Dracula, Frankenstein, Creature From The Black Lagoon, and Psycho.)

We’re fairly certain The Conjuring, which opens today, will be one of the scariest movies of the year – and based upon its premise, earns its place among the ranks of iconic haunted house horror flicks, The Cat and The Canary included.

Based on the chilling true story about a pair of paranormal investigators, Ed and Lorraine Warren (played by Patrick Wilson and Vera Farmiga), who are called to address a haunted Rhode Island home, The Conjuring follows a forked storyline.

The first narrative thread follows Ed and Lorraine Warren’s ghost-busting pursuits. Paranormal celebrities, the duo have investigated notorious haunting cases, including the Amityville house, and several landmark paranormal cases. Their investigations have starred in movies like The Haunted and The Haunting in Connecticut.

In honor of one of the most highly-anticipated haunted house horror films of the year, we formally induct The Conjuring into its rightful genre, and take a visual look at some of the best haunted house narratives out there.

From The Uninvited to What Lies Beneath, here’s a look at some of the scariest haunted house horror movies to ever grace the big screen. (And yes, in Hollywood, it seems the glut of eerie homes lie in those thick, legendary New England woods.)

One tip for real-world real estate purchases–if a house seems insanely cheap for what it appears to be worth, do a little research. The Lutz family, who got a great deal in a little town called Amityville, would second this notion.