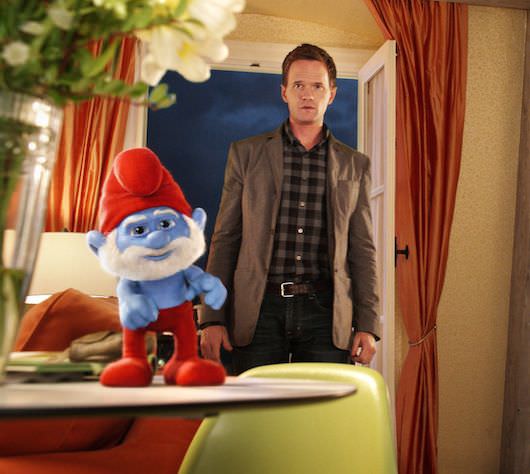 From Gene Kelly to The Smurfs 2: A Brief History of Live Action & Animation

The Smurfs 2 , out today, is the latest in a long (very long) line of live action/animation films. 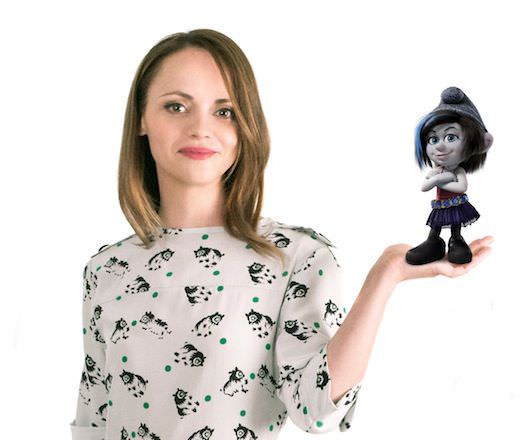 Here's how the action in The Smurfs 2 combines the animated and the real–Gargamel kidnaps Smurfette (Katy Perry, reprising her role) and takes her to Paris (not the worst destination if you’re going to be kidnapped), which launches her would-be saviors (Papa, Clumsy, Grouchy and Vanity) into the real world to find their friends Patrick (Neil Patrick Harris, reprising his role) and Grace (Jayma Mays, also reprising) to help them rescue her. This moment, when the 2D realm seeps into the 3D world, is not some new computer generated gimmick–it's a trope as old as the medium itself. 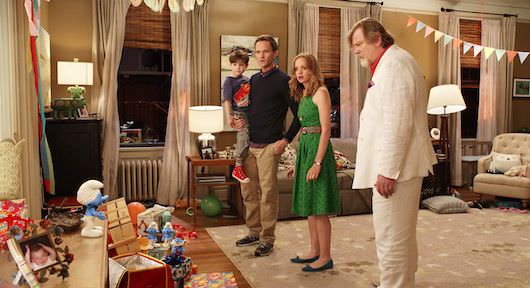 But hold on—what, exactly, do we mean by live action/animation? It’s a tough genre to define in a medium that now blends computer animation and real actors so seamlessly as to be nearly indistinguishable. For help narrowing our focus, we turn to a legend.

Let’s take a brief tour of the history of this genre. 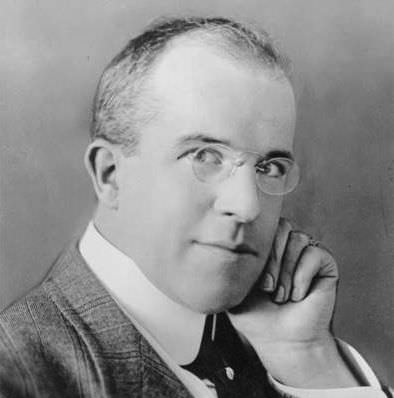 In 1900, an American cartoonist for the New York Evening World by the name of J. Stuart Blackton released what is considered the first ever live action and animation film, The Enchanted Drawing. Blackton stars in the film, drawing a cartoon face on an easel. Watch as Blackton draws a bottle of wine and a glass and takes it right off the easel and into his hands. This film is 114-years old and it’s still cool:

This film was made in Thomas Edison’s New Jersey “Black Maria” studio, utilizing stop-camera techninques. According to the Library of Congress, this was probably filmed a few years before 1900, as a part of Blackton’s vaudeville act.

Then, in 1914, a short entitled Gertie the Dinosaur was created by another cartoonist (and animator, and American), Winsor McCay.

It was Gertie’s adorableness that separated her from earlier efforts by McCay himself (and Blackton) and might have presaged animated cartoon characters as we know them today. Gertie was the first animated character to have incorporated techniques like keyframes, tracing paper, and the Mutoscope action viewer. She was a star.

You can’t talk about the history of live action and animation without talking about animation pioneer Max Fleischer, inventor of the rotoscope, the device that made it possible for animation to appear more lifelike by tracing the movement of a real person. Check out this instructional film, Now You're Talking, that Max and his brother Dave made about the telephone, using a combination of animation and live action.

Fleischer is also famous for, among other achievements, his Koko the Clown series. He photographed his brother Dave in a clown costume, and a year and some 2,500 drawings later, Koko the Clown made his debut.  In Out of the Inkwell (1923), you watch Fleischer draw a picture of Koko the clown inside of a balloon—Fleischer’s hand then squeezes, spins and inflates the balloon until he finally pops it with his pen. When Fleischer leaves the frame to go to bed, Koko jumps off the page and gallavants around the drawing table. Fleischer’s forced to get out of bed and draw Koko on top of a mountain peak in order to keep him on the page and allow Fleischer himself to get some rest. What ensues is a battle between man and his animated creation—a precursor to one of the hallmarks of the genre that was to come some 65-years later when a 'toon-hating' detective is called in to investigate the framing of an innocent cartoon rabbit.

It shouldn’t be surprising that one of the early giants in the genre was Walt Disney, who’s first efforts at marrying live action and animation predated the creation of Mickey Mouse. Disney’s Alice Comedies featured Virginia Davis, the live-action star of Alice in Wonderland, the 1923 short directed by Disney himself, along side a host animated characters.  In 1924’s Alice’s Spooky Adventure, Alice hits a baseball into an abandoned house. When she goes to retrieve it, she’s falls into one of her transporting dreams, coming face to cartoon-face with Julius the Cat, among other animated characters. 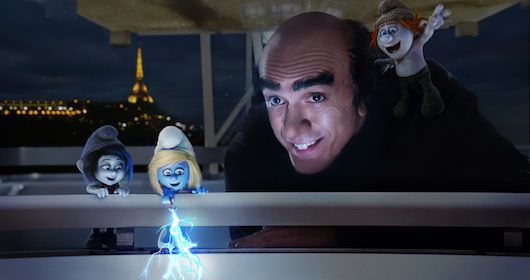 By the time the talkies arrived, the era of live action and animation really took off, with some of the most memorable moments in film falling into the category. Warner Bros. cartoon You Ought to Be in Pictures arrived in 1940 and can rightfully be credited as a progenitor of one of the famous examples of the genre—Who Framed Roger Rabbit. In this Warner Bros. Looney Tunes short film directed by Friz Feleng, Porky Pig and Daffy Duck interact with with producer Leon Schlesinger and other live actors. It's considered one of the greatest cartoons of all time, and a landmark achievement in the marriage of live action and animation. Watching Daffy try to convince Schlesinger that he should become the new star of Warner Bros cartoons (while Schlesinger smokes) is still a joy.

For one of the most celebrated moments in live action and animation history, let alone film history, you’ve got the sequence in the 1945 film Anchors Aweigh in which none other than Gene Kelly dances with Jerry, the animated Mouse. For anyone old enough to have been watching MTV in the late 80s, you will remember a little video entitled “Opposites Attract” by a young lady by the name of Paula Abdul, where the choreographer/dancer/singer absolutely kills it–while dancing with a rapping animated feline named MC Skat Kat. Abdul’s inspiration was Kelly and Jerry.

Disney Studio then went on a run from 1945 all the way up to 1988 in which they released a slew of well regarded, genre-pushing films. From The Three Caballeros, where Donald Duck receives a kiss from Carmen Miranda’s sister Aurora, to one of the best-known films in the canon, 1964’s Mary Poppins, where Dick Van Dyke dances with cartoon penguins while Julie Andrews watches.

Arguably the most famous of all live action/animation films is Who Framed Roger Rabbit, which was released in 1988 by Disney and Steven Spielberg's Amblin Entertainment. This groundbreaking film utilized vastly improved special effects to thread live action and animation like never before. Ten-year olds (just like me at the time) sat in awe when Bob Haskins was handcuffed to Roger Rabbit, and Jessica Rabbit's entrance is one of the truly great moments in live action/animation history. There was also the hugely rewarding moments when the worlds of Disney and Warner Bros. Looney Tunes collided. Watching Mickey Mouse share screen time with Bugs Bunny, or a piano duel between Donald Duck and his Looney Tunes rival Daffy Duck, was like watching a dream you never realized you had come true (at least for the 10-year old me).

There have been a lot of great live action and animation films in the years since–1994's The Mask with Jim Carrey was a particularly satisfying (and strange) addition to the canon, and 2006's The Science of Sleep, by the French auteur Michel Gondry, was a surreal, ambitious take on this historic genre.

So if you go to take the kids to see The Smurfs 2 tonight, or this weekend, know that what you're watching isn't just another summer release for children–it's an addition to one of cinema's most storied genres.