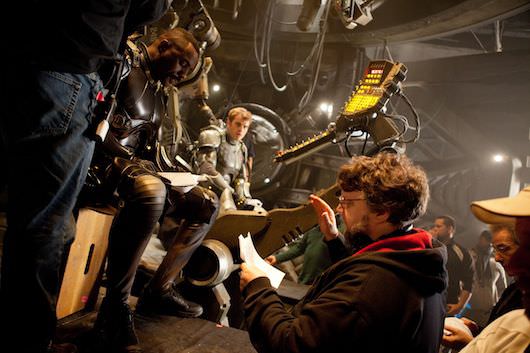 The early reviews suggest that Guillermo del Toro’s Pacific Rim (which opens this Friday) is nice blend of what you want out of your summer blockbuster—spectacle, suspense and solid storytelling.

Pacific Rim is also a nice blend of the Japanese tradition of Kaiju films (the most famous example being Godzilla) and mecha stories (about robots or machines), popularized in Japanese manga and anime.

Here’s Pacific Rim’s premise in a nutshell: in the future, massive monsters called ‘Kaiju’ (sound familiar?) rise from some hellish portal deep in the Pacific and lay waste to coastal cities. Mankind fights back by creating Jaegers, gigantic robots (mecha) that are piloted by two humans who are connected by a neural bridge.

And frankly, as far as summer blockbusters go, can you ask for more than a director of Del Toro’s caliber and source material from Japan?

Del Toro is one of the most imaginative filmmakers alive. His masterpiece, 2006’s Pan’s Labyrinth, was a work of such sustained horror and fantasy, heartbreak and uplift, it remains the only film I can remember where audience members burst into tears when the credits rolled. The film, set in 1944 Spain, threads the real (and brutal) world of a fascist regime with a fantasy realm, which is the eponymous Pan’s labyrinth. The protagonist, a young girl, escapes a sadistic army officer by following a mysterious (and potentially malicious) faun creature (Pan) into the labyrinth, and eventually winds up at one of the greatest, and scariest, banquets ever captured on film. Much of this was pulled directly from Del Toro’s journals that he had been keeping for twenty years.

Is Anything Truly ‘Original’?

For all of del Toro’s imaginative brilliance, all storytellers are, by nature, masterful thieves. Perhaps thieves is too strong, let’s say…illusionists. Borrowing, repurposing, stripping for parts, and (although this term is overused) re-imagining stories that came before and creating the illusion they’re brand new. Although Pan’s Labyrinth sprung from dreams and ideas the director had for years, he cited inspiration from a host of sources, from Jorge Luis Borges’ Ficciones, Arthur Machen’s The Great God Pan and The White People, Algernon Blackwood’s Pan’s Garden and the work of the Spanish romantic painter Francisco Goya. No idea is born an orphan, no matter how seemingly personal it might be.

Is there a country that has inspired more American films than Japan? You could make arguments for France and Italy (while in television, Americans seem to adapt a British show a week, with Scandinavian crime dramas getting ever hotter), but Americans return to Japan again and again to draw inspiration.

Del Toro is a filmmaker who honors sources but doesn’t like to get into the referential game. He even went so far as to make sure his designers didn’t watch the classic Japanese kaiju films Pacific Rim is so obviously indebted too.

As unique and utterly Del Toroian (we’re coining this term) his monstrous kaiju’s are (no two are alike, each is as lovingly crafted as the monsters and freaks who make up his Hellboy films), the very word ‘kaiju’ is, of course, Japanese, and literally translates to “strange beast.” Those films that Del Toro cautioned his designers against mimicking are the very source where they were originally spawned. From the obvious Godzilla to the less obvious Gamera (about a giant, insane turtle monster), to The War of the Gargantuas (two colossal, hairy humanoids with very different dispositions eventually battle), Japan’s influence on American cinema is practically as old as the medium itself. Here's no slouch in the originality department, Tim Burton, talking about The War of the Gargantuas to the Australian Center for the Moving Image.

So Del Toro is hardly the first filmmaker to draw inspiration from Japan. And sci-fi is hardly the only genre that Japanese filmmakers have made their own—and that have inspired the rest of the world.

You can’t talk about Japanese influence in cinema and not talk about Akira Kurosawa. Kurosawa practically single-handedly fed the American appetite for westerns in the 1950s and 60s by providing them ronin (samurai) masterpieces to be remade in the image of stoic gunslingers portrayed by the likes of Steve McQueen, John Wayne and Clint Eastwood.

In 1954 Kurosawa released Seven Samurai, considered one of the most influential films of all time. The hyper-short synopsis is that seven samurai help defend a farming village from a group of bandits. Samurai is also the inspiration for John Sturges The Magnificent Seven, a western remake (both in genre and geographically) of Kurosawa’s beloved original. It is not considered the masterpiece the original was, but this Steve McQueen starrer is the second most shown film in U.S. history, behind The Wizard of Oz.

(In 1980, a space opera version of Samurai was released. It’s called Battle Beyond the Stars. Rent it.)

Kurosawa released Yojimbo in 1961, which is about a ronin who arrives in a small town where two crime lords are competing to take over. Each of these bosses want the newly arrived badass to be their bodyguard. This became 1964’s A Fistful of Dollars, directed by the legendary Sergio Leone and starring Clint Eastwood as a wandering gunfighter who plays two rival families against each other. Yojimbo was then again remade into Last Man Standing, starring Bruce Willis.

A decade before he was feeding the west’s appetite for western (and spaghetti western) films, Kurosawa made a groundbreaking film that has inspired filmmakers, television writers, essayists, academics, novelists (the list really does go on and on) and more. We’re talking about another one of his masterpieces, 1950’s Rashomon, which followed four characters who describe their differing versions of the same crime. It was a master class in storytelling and presented a wildly inventive, even radical, structure at the time. In 1964, the American director Martin Ritts turned this into The Outrage, in which four travelers in the 19th century southwestern United States discuss a recent murder trial. All of their perspectives are different. It starred Paul Newman and William Shatner. Nobody remembers it. Yet everybody remembers Rashomon, and it’s even become a scholarly term—“The Rashomon Effect”—which is used to refer to the contradictory interpretations of the same events by different people. Countless films have used "The Rashomon Effect" to their advantage, from Pulp Fiction to The X-Files.

Then of course there’s horror. Japan could reasonably be called the horror capital of the cinematic world. Perhaps the most famous of these examples is Ringu, a 1998 Japanese horror film directed by Hideo Nakata, which itself was adapted from a Japanese novel, which itself draws on a Japanese folk tale. It’s the highest grossing Japanese horror film of all time ($137.7 million) and was named by the Japanese statistics company Oricon the scariest Japanese movie ever.

Ringu’s plot was simple and terrifying—a cursed video kills viewers seven days after they watch it (hmm, which just brought this idea to mind—David Foster Wallace’s Infinite Jest, also about a killer video of sorts, came out in 1996…we’ll save for this for another article.) When a viewer is found dead, their face is twisted in a truly unsettling rictus of horror. Gore Verbinski directed the American version, The Ring, which was so successful (and truly terrifying) it helped kick start the American craze for what’s known as ‘J-horror.’  When I saw The Ring in San Francisco, right at the film’s climax when you finally see what it is about the video that's been killing everybody, a bunch of kids burst into the theater. They were running from security. Everyone screamed. It was awesome.

J-horror hungry American filmmakers quickly followed Verbinski’s lead. Takashi Shimizu’s Ju-On became the American film The Grudge, only in this case they brought in Shimizu himself to direct the American version. It didn’t fare well. Hideo Nakata’s  2002 Dark Water, about a mother and daughter moving into a creepy apartment that has some major plumbing issues became Walter Salles 2005 Dark Water in which a mother (Jennifer Connelly) and a daughter move into a creepy apartment with some major plumbing issues.

Then there's the horror films Pulse, Premonition, The Secret, One Missed Call, and Apartment 1303 3D. All of them remakes from Japanese originals.

And what about Godzilla, the most globally recognizable of Japanese exports? The original kaiju has spawned 27 sequels and who knows how many ripoffs, and was remade by Roland Emmerich in 1998. Well, Warner Bros. has the film in production now.

The strange beast will rise from the sea again next May.