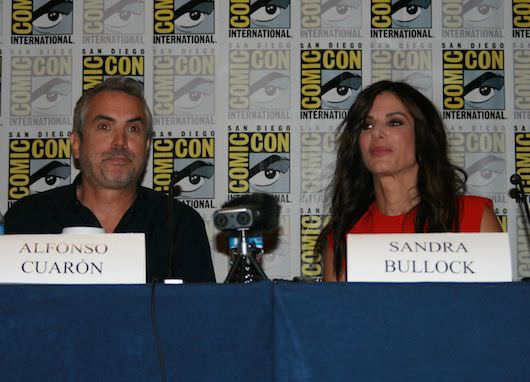 Comic-Con is the Iowa caucus of popular culture. Devoted fans gather to get an early look at what the entertainment media will have to offer in the next few years. Producers of movies, television, games, books, and more share early glimpses of what they will be offering, hoping for feedback and the kind of credible viral support that is more valuable than millions of dollars worth of advertising.

Some of the highlights of the presentations on upcoming films included:

DreamWorks Animation’s update of the classic “Rocky and Bullwinkle” characters will be in theaters in 2014, with the voices of Modern Family’s Ty Burrell as Mr. Peabody, the erudite dog who can go back in time via his Wayback machine, and Max Charles as Sherman, his son via an “interspecies adoption.”  “It’s the flipside of the boy meets dog story,” director Rob Minkoff explained. He showed an extended clip with the title characters in the middle of the French revolution. The voice cast will include Stephen Colbert and Leslie Mann.

How to Train Your Dragon 2

Dean DeBlois, who co-wrote and co-directed the first film, is going solo for the sequel for DreamWorks Animation, scheduled for release in June of 2014. He agreed to do the film on the condition that the studio commit to a trilogy.  “This is the second act, pushing beyond the known Viking world to a place where humans and dragons are still at war, an encroaching threat that will find its way back to Berk. It dials the stakes up but does not lose the balance of fun.” It takes place five years later (the new television series will fill in some of the missing years.) The still-unfinished scene we saw featured a 19-year-old Hiccup, who has “supplemented his awkwardness with the Viking equivalent of bike leather.  But he is still a nerd.”

Sandra Bullock and director Alfonso Cuarón were at Comic-Con to talk about their outer-space saga from Warner Bros. Pictures, scheduled for release this fall. Bullock told us that for her role as an astronaut who drifts in orbit after the space shuttle explodes, her research included “incredibly helpful” advice via calls and emails from real-life astronauts who are currently on the space station. She was especially moved by “the vantage point,” of the view from space. “Because of what they get to see and admire about our planet, they have a deep, deep love…an emotional gravity.” She hopes the film will inspire audiences to “be taken out of their bodies and wonder what have you not experienced, what have you not savored, to think about a chance to be born again and do what you were born to do.”  The film has “thrills and action” but also “a beautiful message.”  She was especially grateful to play the lead role despite the pressure to make the character a male.

This 2014 animated release from Warner Bros. Pictures inspired by the classic toy has voice talent that includes Liam Neeson, Morgan Freeman, Will Ferrell, Chris Pratt, and Elizabeth Banks. Directors Phil Lord, Chris McKay, and Chris Miller explained that there are two great ways to play with Legos. You can “follow the directions on the box and then you have a Millennium Falcon or something and that’s awesome, or, you can dump out all the pieces and make up something and that’s awesome, too.”  McKay said that making the movie is like playing with Legos. And he said that the end result will be something like “if Michael Bay kidnapped Henry Selick and forced him to make a Lego movie.”  “But with feeling,” added Lord. They said the film will “really use the Lego-ness” of the toys, staying within – and making the most of – the restrictions of their movements.

Jeff Bridges, Ben Barnes, and Game of Thrones Kit Harington star in this sword and sorcery fantasy from Warner Bros. Pictures to be released in January 2014.  Though it is based on a children’s book, "The Spook’s Apprentice", the movie changed the age of the protagonist from 13 to near-adult, so it could be “more edgy and dark.”  Bridges said he was drawn to the story because he is “a big fan of myth.” He talked about how the movie’s themes of good and evil being mingled in all hearts, and said that the purpose of art is to help bring the dream of peace about. Director Sergey Bodrov said that it is great to make an action movie, but it is important to say something. Bridges recalled a highlight of the filming, when they were on a mountaintop in Alberta, “on top of the world.”

Writer-director Gavin Hood wanted to minimize CGI, using "tangible, beautifully-built sets" whenever possible in the sci-fi adventure based on the novel by Orson Scott Card. Comic-Con attendees got to see and touch some of the props, costumes, and sets in the "Ender's Game Experience," an 8-room exhibit so huge it could not fit in the San Diego convention center and had to be set up across the street. Attendees walked through Ender's living room at home and his dorm room with the barracks-like bunk beds. They could sit at the classroom desks and examine the simulators that run the title program. The movie will be in theaters on November 1.