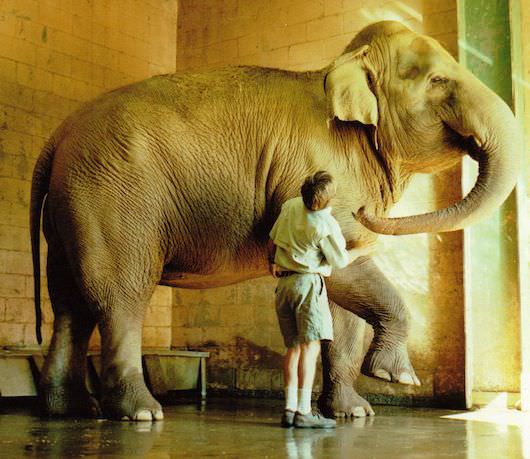 If you’ve ever seen a rhino in a television commercial, his name is Tank and he’s the only working rhino in show business.  Maybe you’ve noticed zebras, bears, leopards, African lions, panthers or Siberian tigers in TV ads or on the big screen and wondered how they're train to stand still, lie down, run around or roar on command for the camera? 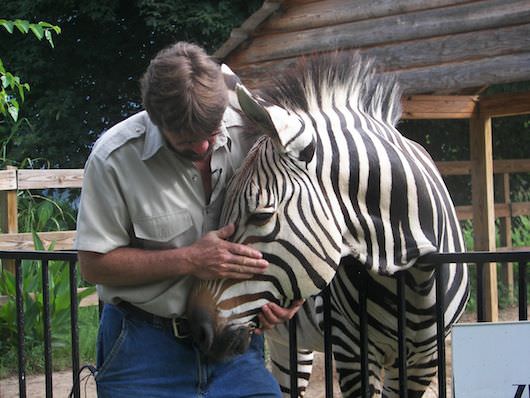 Many of the animals you see on the big and small screen belong to David Meeks, director of Hollywild Animal Park in South Carolina. Meeks is the East Coast animal wrangler filmmakers call when they need, say, a panther in their in movie. The business side of the 100-acre park is called Cinema Animal Talent, and it’s been going strong for over 30 years. Tank, the white rhino, is one of Meeks’ biggest stars.

With over 700 exotic animals living in the park, Meeks has tapped on his zoological collection for over 60 major motion pictures and countless print ads and television commercials since the early 1980’s.  For nearly a decade his cougars shilled for Lincoln-Mercury and pounced in The Last of the Mohicans and Reversal of Fortune. Pongo the orangutan did commercials for Mazda, and Donna the Asian elephant appeared in Ryder Trucks and Land Rover ads. Tank the rhino can't stop getting work, offering his majestic prehistoric-looking bulk for Blue Cross/Blue Shield and Land Rover ads. Meeks’ lynxes have worked for Minolta, while Alfonso the Leopard Appaloosa horse was in The New Adventures of Pippi Longstocking, along with some of Meeks’ crafty Capuchin monkeys.

Meeks’ film credits include, A Breed Apart, Order of the Black Eagle, Date with an Angel, Never Say Goodbye, Prince of Tides, Reuben, Reuben, Rottweilers, The Real McCoy, The Stand, Betsey’s Wedding Days, Days of Thunder, Monkey Shines, Prancer, Blood Savage and many, many others.

Recently the park had a joyous occasion when a long-horned African Watusi (a breed of cattle native to Africa) accidentally bred with an American Bison. They tagged the resulting offspring a Waffalo and cheerfully named them Pop Tart and Eggo.

The Credits had a chance to talk with Meeks about his unique career. 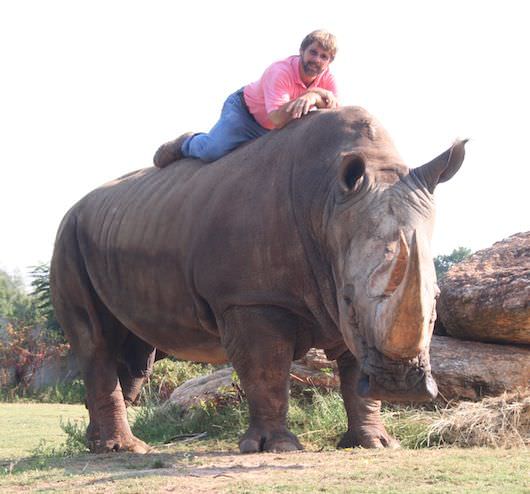 The Credits: How do you even begin training animals to camera ready?

I don’t call it training because you can’t really train a wild animal. I call it “conditioning” and you have to keep it up even when they’re not in a film. You have to have a rapport with an animal—be firm but be fair. They’re not circus animals. And they don’t understand our humor.

But you’ve got these animals doing tricks…

An exotic animal will only do tricks if he thinks you won’t hurt him. He can react badly if you don’t know how to read his body language and make him relax. When I see that they're uncomfortable I’ll tell the director, “We have to take a break.” I know what the animals are saying. They’ll scream it at you. You can’t second-guess an animal’s behavior. It’s instinctive for them to act from experience. Even a mixed martial arts master is nothing going up against a lion, a primate or a bear. If the animal doesn’t respect you, you’re gone.

What was one of the most unusual things you were asked to have an animal do?

One film company wanted to do a complete body scan of our rhino— film every inch of the animal’s body so that they could make him do everything a rhino can’t do, like cartwheels or a split. They wanted to make his horns perfect, too, but I realized that if they did that they would never need to use a real rhino again. I didn’t do it. The real thing looks much better. 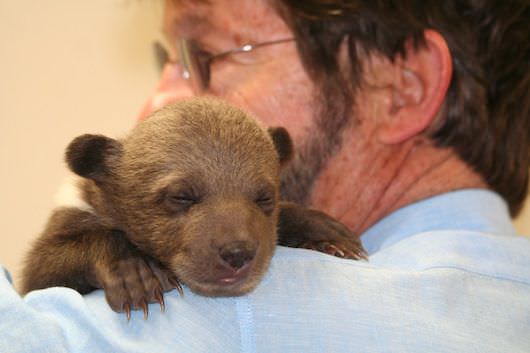 What are a few of the features your animals or you have appeared in?

There are so many. In Stephen King’s miniseries The Stand, where it was good versus evil, we used cockroaches, deer, a dog, a butterfly, hundreds of bats, a crow and a cow. I had to go all the way to Utah to find this giant Holstein. We used bats in The Big Chill, too. In Betsey’s Wedding I stunt doubled for Alan Alda when he had to fight a Bengal tiger we had provided. In another movie I doubled for Gary Sinise. For A Breed Apart, we provided the eagle, which at the time was considered an endangered species. Recently we shipped monkeys to Florida for an upcoming episode of Shipping Wars. And even though we didn’t have a lion in it, my lions were used for study purposes in The Lion King.

Have you ever had to modify an animal’s appearance for the purposes of a film?

Yeah, for this film Prancer [a Christmas movie about a girl who comes across a reindeer with an injured leg]. When director John Hancock came to me to do a Christmas movie I figured they would want a reindeer. I'd never even seen a reindeer up close and never worked with one. But he told me they preferred to use a fallow deer because it’s prettier. I told them any deer that has antlers is a male, and this time of the year they are in rut [their mating season], and there’s no way I’ll work with a deer in rut next to an 8 year-old girl. Even a deer that’s tame and workable will kill you when it’s in rut.

Who knew deers in mating season were so deadly.

Yeah. So I don’t hear from them for a while, and then one day I get a call back and they said I said I could use a reindeer, but now the problem is the timing. I tell them the females lose their antlers before the males and you could have a reindeer that loses its antlers in the middle of the shoot. So I flew up to see them and said we have to have several reindeer on the set because they are herd oriented and they need to stay together. So we used a female and had fake antlers made for her. A puppeteer made a fake reindeer head for close ups but they only had to use it once.

Did any of your animals do something you couldn’t have predicted?

We were in Nashville to do an ad. Every time I’d go there I had to do four or five commercials at a time. The last time I was up there I had a female chimp called Rosie. Chimps are really smart. They work on credit [meaning, incredibly, that they’re so smart they know they’ll be rewarded at a later time.] I said, “Rosie, could you please do some cartwheels over here?” But you can’t rush her. I can see the stool she’s sitting on is too close to the cabinets and there’s a paint bucket nearby. The director says they'll have the stool secured, and I left the set and went to the trailer with Rosie. When I got back they said it was all fixed. So I dressed her up, put her diaper on, and the stool was still not locked down. Then I saw her go for the paint bucket. She snatched it up and when I grabbed it out of her hand she bit me. Every time animals do something there’s a good reason. They think you make it rain or make the sun shine. They look at you negatively or positively and they think and ask questions. They will instinctively blame you for your mistakes. 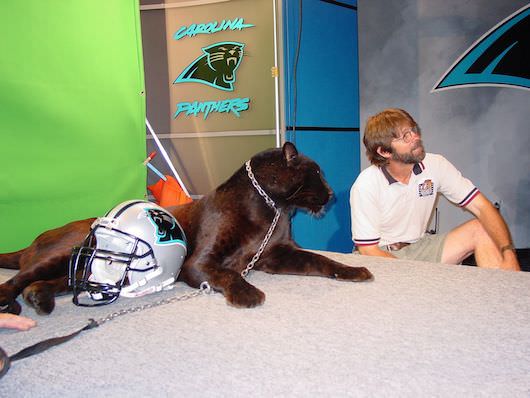 What was the most dangerous thing that happened on set?

Once when we were filming in Chimney Rock, North Carolina late at night, I had my black panther walk between a cave and a rock. There was a fire nearby and she was on a piece of transparent monofilament we use for a leash [a thin plastic wire like a fishing line that can’t be seen, so it’s used as a leash during filming]. When she crossed the fire the filament burned up and I didn’t know where she was. In this case I should have used a steel cable even though it doesn’t stretch. If something goes wrong on a shoot, you have to let the big cat run until you can get them back.

Whoa, you have to let a panther just run? Is that the craziest thing that’s happened to you on a set?

No. I was doing a Ryder Trucks commercial with the actor Steve Landesberg. I had worked with him before in Leader of the Band. We head off to Atlanta with this Asian elephant provided by this trainer I know, Rex.

When we got to the set I saw that the elephant was reaching out her trunk. I could tell she was fixing to hit Steve and I was worried. The line in the ad was, “When I’ve got something really big, I choose a Ryder Truck.” I asked Rex, “Has that elephant ever smacked anyone?” He hesitated. So I asked Rex if the elephant maybe needed a break, and he agreed. But then Rex said, “Nah. Shoot the rest of it.”

As soon as the cameras begin to roll, the elephant knocked Steve clear out of the shot. 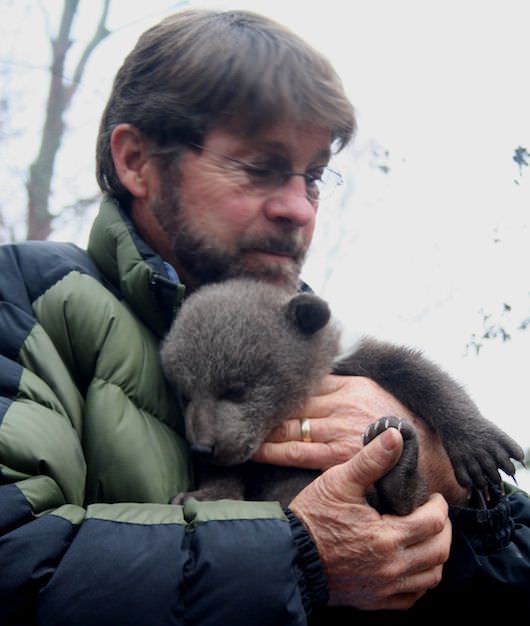