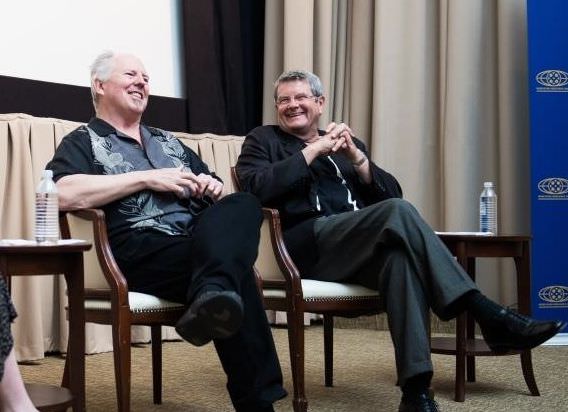 An Insider Discussion on Film Scoring

Remembering the director is boss is key to working in the movie industry, according to music professionals.

“You have to yield to the director. You can only have one vision,” long-time movie music editor Dan Carlin told The Credits after a panel discussion on film scoring hosted by the MPAA in Washington, D.C. “That’s what unites a crew that’s putting together a movie.”

Carlin, whose four decades of movie credits as a music editor include The Last of the Mohicans (1992) and Bruce Almighty (2003), is also the chair of scoring for the Motion Pictures & Television Thornton School of Music at the University of Southern California.

One of Carlin’s primary jobs in movies is to pick the source music, or the songs that characters can hear in-scene. He said he almost never offers a director less than five song choices for a scene, though a rare exception was Bruce Almighty where Tony Bennett was brought in to sing “If I Ruled the World" live.

Carlin shared the panel with George S. Clinton, a composer known for his work on the Austin Powers movies and the chair of the Film Scoring Department at Berklee College of Music in Boston, who emphasized his career-long trial-and-error process of learning to communicate with movie directors about music, an area where they aren’t always that well-versed.

“To me, the composer’s the last actor in the movie,” he said, in discussion with The Washington Post’s Ann Hornaday. “So I try to encourage directors to speak to me in emotional terms, the way they would an actor.”

As part of that process, Clinton said he’s “learned to embrace” the temporary music often used to edit a film, “because it gives me a level of insight into what the director’s thinking.”

Clinton, whose composing credits for movies begin in 1980, said he learned the hard way not to work from the script after writing a comic theme for what turned out to be a serious movie in the director’s hands. Now, he doesn’t start scoring until he’s seen the first rough cut of the film. At that point, “probably the most important meeting that a composer has” happens with the director: a spotting session.

Clinton puts the focus on art rather than logistics in that first crucial meeting, though over the years he’s learned his lessons about logistics as well: for example, to not use saxophones under dialogue, and–after a triangle was used for emphasis in a battle scene–letting the orchestra see the scene they’re scoring.

“Creativity is all about trial-and-error and as this process has become more and more brief because of post-production schedules being shrunk, I have to get up at four in the morning just to give myself the opportunity to screw up,” he joked after the panel.

Clinton–who still works with orchestras but is optimistic about new technology–said one of the more frustrating changes in the industry is the tendency to “keep editing right up until the very last minute.” In turn, Carlin said licensing is “the issue of the day,” mentioning the songwriters who are losing opportunities to make money because license owners restrict studios from using a song bought for the movie on the soundtrack or occasionally the DVD.

Beyond the changes, Clinton said the most important tool to a composer remains their emotional connection to the material.

“I tell my students, the most unique thing the composer brings to the table is that ability to connect emotionally with a scene and express it through their music,” he told The Credits. “It doesn’t matter how much technology training you have, or how much musical training you have, if you don’t have that basic ability to connect emotionally, you’re not going to be very good at it.”

The event’s focus on students was due in part to co-sponsor CINE, an educational corporation known primarily for their student competitions, that hosted a film scoring competition for the first time this year.

CINE’s Executive Director Wendy Revel told The Credits that Carlin was instrumental in setting up the competition guidelines. Both men were in town to attend the awards gala that evening.