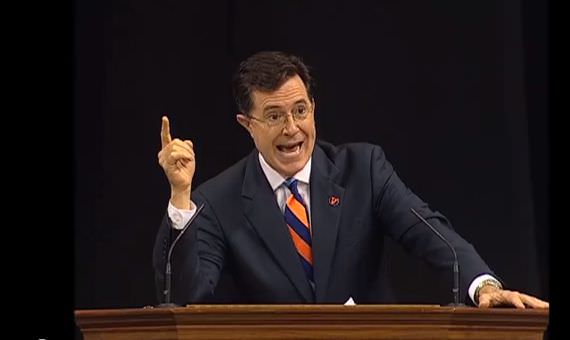 Celebrities doling out sage advice during college commencement speeches is nothing new, but this year’s crop was especially entertaining. The Class of 2013 was treated to talks by everyone from Julie Andrews, who spoke to the University of Colorado Boulder, to Robert Redford, who got downright sentimental at Westminster College, to Ed Helms, who broke it down for the kids — and busted on the school mascot — at Knox College. (Cue The Hangover jokes!)

If, like us, it’s been ages since you actually donned a cap and gown and learned from your world-weary elders, you’ll find that this year’s collection of speeches is at times gut-wrenching, inspiring, and most of all, nostalgia-inducing. Who doesn’t want to live vicariously through the kids? To that end, we’ve compiled the best tidbits, admonitions, lessons, jokes, and anecdotes for you.

And to the Class of 2013, a bit of earnest advice: There are plenty of amazing jobs in the movie industry — just check out our archives for proof.

Best quote: “If I can tell you anything of value it is that the most important thing you can do from here is to hold on to one another because the truth is you can’t do it alone, and it isn’t as much fun.”

Best quote: “There are so many opportunities for giving in this world. Don’t engage in random acts of kindness, engage in planned acts of kindness. There are at-risk children who need to be mentored. There are people who go hungry every day, there are those who are infirm and have no one to look after them. Some have experienced a paralyzing loss. Use your knowledge and your heart to stand up for those who can’t stand. Speak for those who can’t speak. Be a beacon of light, for those whose lives have become dark. Fight the good fight against global warming. Be a part of all that is good and decent. Be an ambassador for the kind of world YOU want to live in.”

Best quote: "If anyone here has a cell phone, please take a moment to make sure it's turned on. I wouldn't want anyone to miss a text or a tweet while I'm giving my speech."

Best quote: “I can’t tell you how excited I am, because I think you want the reins. And what you are basically saying is, ‘Give us the reins, don’t tell us what you did or didn’t do, don’t give us examples from the past, don’t bother us with that, just give us the reins, please, step aside…and I give you all the encouragement in the world to grab those reins and run with them.”

Best quote: “With all due respect, 'The Prairie Fires' sounds more like a Steinbeck novel than a team name. And honestly, not even a good Steinbeck novel. You need something that strikes fear into the hearts of the opposing team, not something that strikes fear into groundhogs. See? Right there: The Knox Groundhogs! That would be a way better mascot!”

Best quote: “The more the world changes, the more it remains the same, I believe, because the most important needs of every human being on Earth are not only food, clothing, and shelter, but equally the need for justice, healing and mercy. Without the latter, the former are useless."

Best quote: “If you think that happiness means total peace, you will never be happy. Peace comes from the acceptance of the part of you that can never be at peace. It will always be in conflict. If you accept that, everything gets a lot better.”

Best quote: “I wanna begin by congratulating the people who have truly earned a day of celebration. A day to take pride in their accomplishments and finally relax a little bit after what at times has seemed like an impossible journey to get to this day. I am referring, of course, to the parents of the class of 2013.”

Best quote: "I don't think I could ever live up to my resume, some of which is fake. I never did `Stage Door' at Brown, I just put that on my resume because I had nothing else. Girls, don't do that."